Home » What to do in Innsbruck, Austria?

What to do in Innsbruck, Austria?

When I went to Innsbruck, I wondered why I didn’t visit that charming town before. As you arrive and see that scenery amid majestic peaks that are breathtaking, you will understand what I mean. 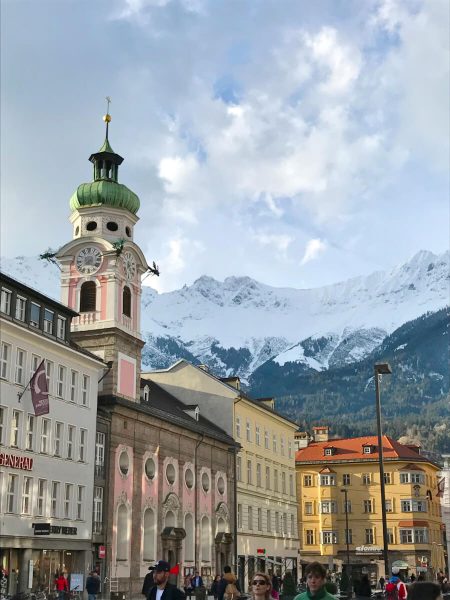 Innsbruck is a lovely town located in the West-North of Austria, almost at the border of Germany, on the deep valley between high mountains within ranges of above 2000 m above sea level, named North Chain.

The town is the fifth-largest in Austria and the capital of Tyrol region. And it is a good starting point to visit the Austrian alps.

We stayed there for five days, and as our friends came by car from Switzerland, we didn’t need to rent a car for our day trips.

After two days strolling around the lovely little lanes and visiting the sights, we went to other places like Axamer Lizum (post here), Stubaier Gletscher and Mittenwald (in Germany, post here).

The city is famous for skiing and other mountain-related activities and a busy tourist destination, particularly in wintertime. Its popularity as a winter sports resort was emphasised when hosting the Winter Olympic Games twice.

The postcard of Innsbruck is the beautifully coloured little houses that line by the river Inn with the snowy Nordkette peaks in the background. To see and take a nice picture of it, you will have to go to the Markethalle. 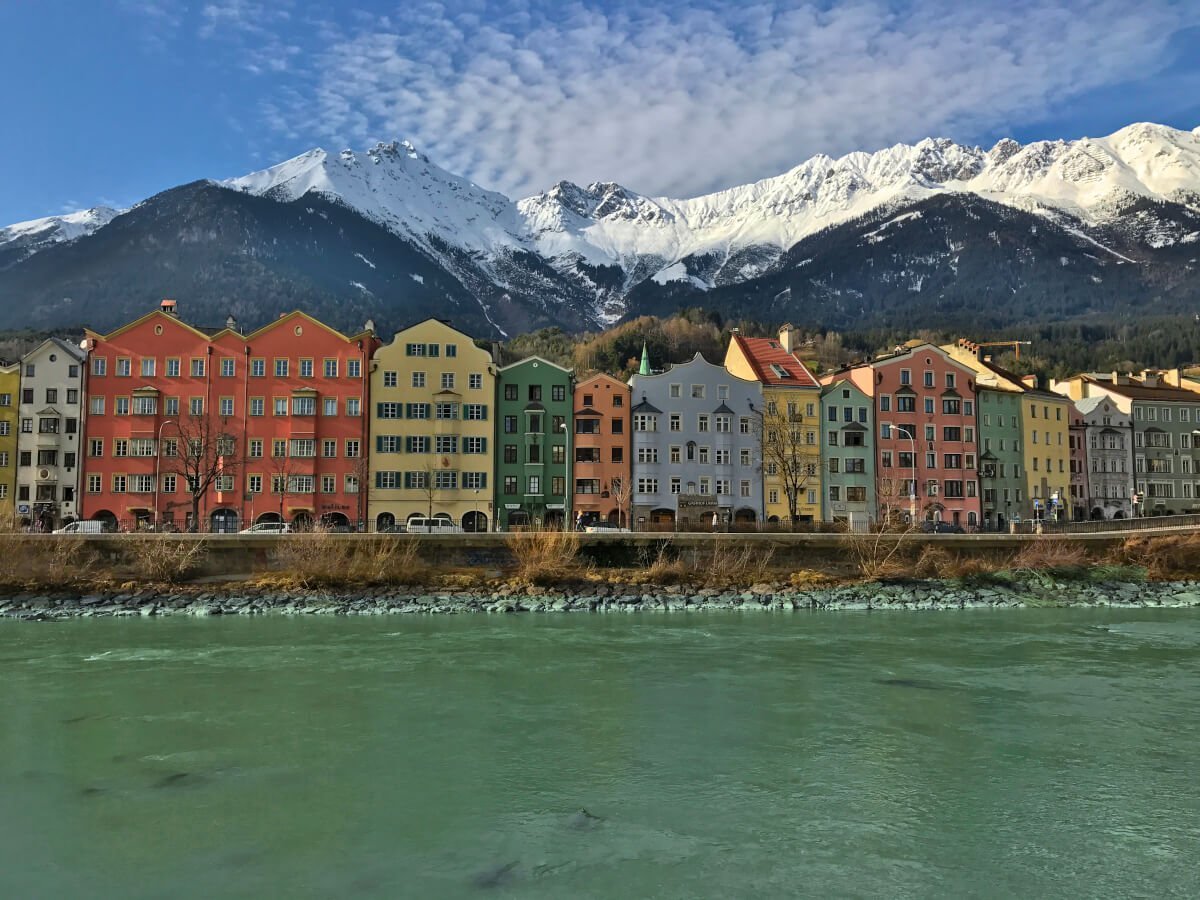 Most of the places to visit are on the Altstadt (old town) and within a reasonable walking distance within them.
Walking around the beautiful collection of late medieval and baroque buildings and dozens of shops, bars, restaurants and charming cafes is lovely. 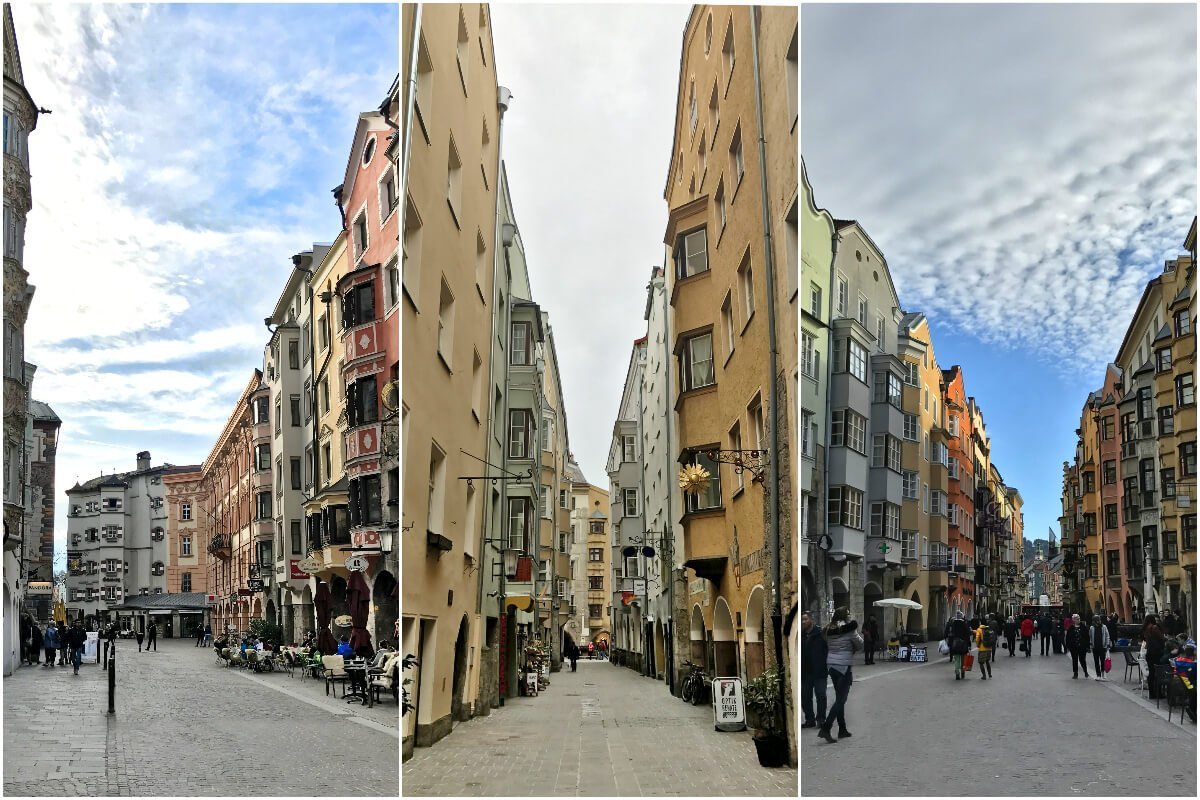 However, here are the top sights you can not miss it:

Goldenes Dachl, we can say that it is the landmark of the city. It is a Gothic balcony of which the roof is decorated with 2657 fire-gilded copper tiles. Address: Herzog-Friedrich-Straße 15 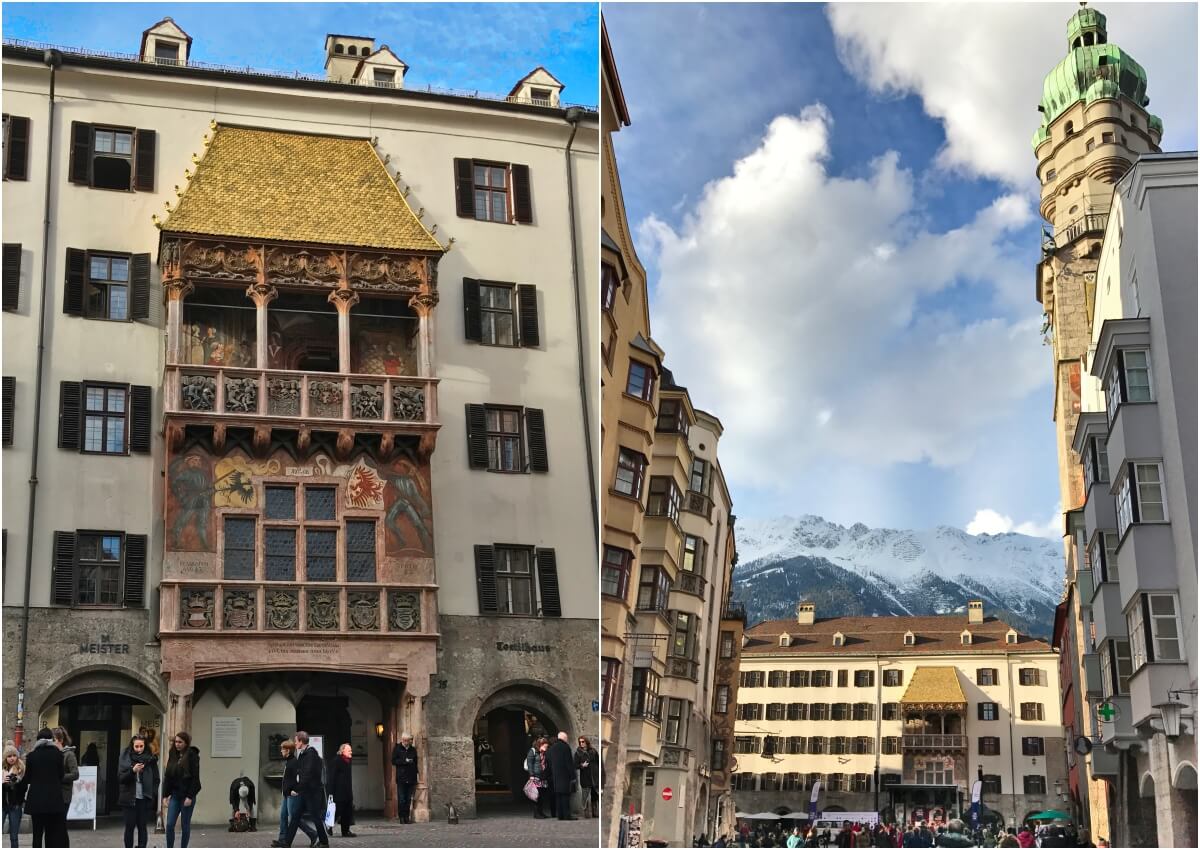 Stadtturm or the City Tower. This gothic tower has a staircase of around 150 steps where you will reach the viewing platform over the historic city (Altstadt). It is a must-do while in Innsbruck. Address: Herzog-Friedrich-Straße 21 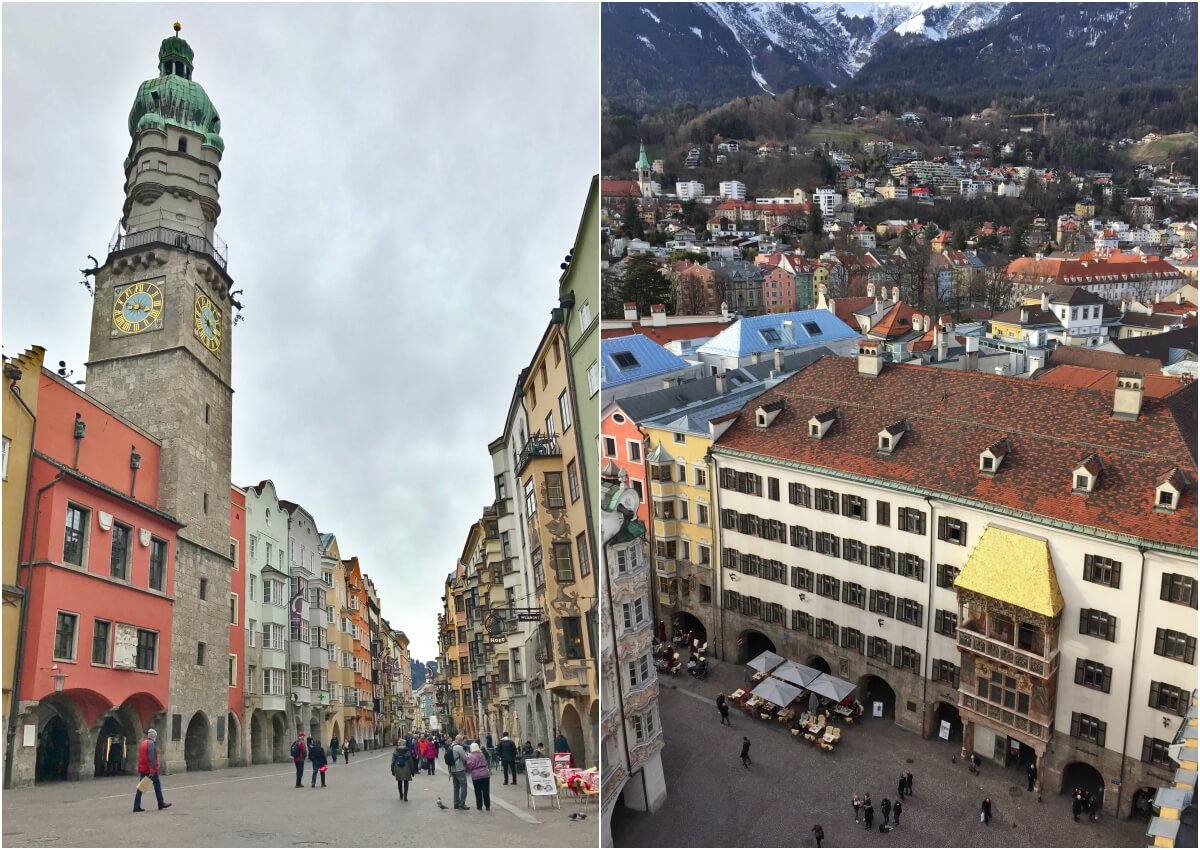 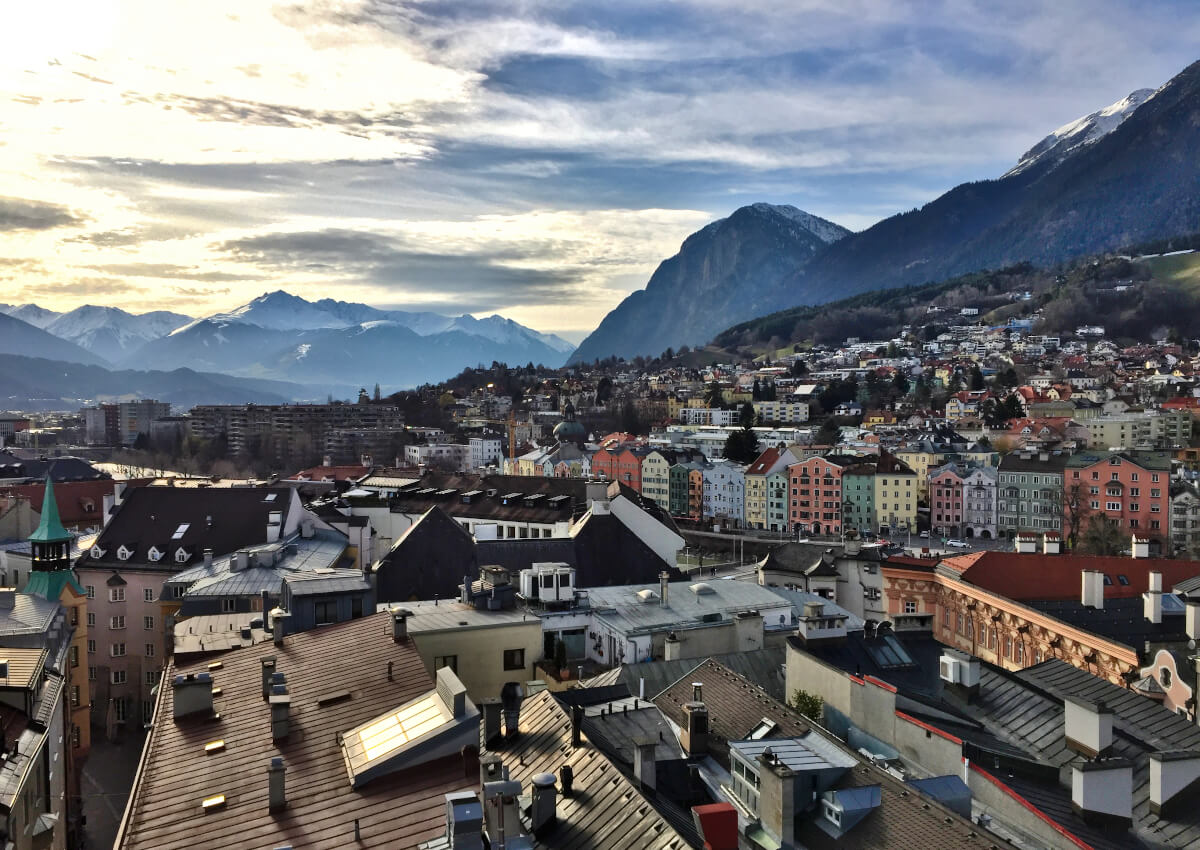 Helblinghaus, opposite the city tower, is Austria’s most beautiful bourgeois house of the fifteenth century with a Gothic and Baroque facade. Address: Herzog-Friedrich-Strasse 10

Dom zu St. Jakob is a Cathedral, with a simple facade of the Baroque style, it has a beautiful interior. Address: Domplatz

Hofburg, the imperial palace is considered one of the most important cultural buildings in Austria. Address: Rennweg 1/3

Hofkirche or the Court Church is a gothic church that has the tomb of Emperor Maximilian I, and inside, it is surrounded by 28 bronze statues, measuring 2 to 2.5m high, watching over the grave. Address: Universitätsstraße 2

Wiltener Basilika or Basilica of Our Lady of the Immaculate Conception is a Roman Catholic church. Address: Pastorstraße 694

Triumphpforte or Arch of Triumph was built in 1765 to mark the marriage of archduke Leopold and the Spanish princess Maria Ludovica. Address: Maria-Theresien-Straße

Markthalle, right in the city centre, it is a farmers’ market with a selection of food shops. Address: Herzog-Siegmund-Ufer

Hofgarten is a park which has an area of 10 hectares with a set of ponds, a children’s playground and a garden restaurant.

Herzog-Friedrich-Straße and Maria-Theresien-Straße are the main streets in the city as they are a pedestrian street.

You can also go to the shopping centre called Rathaus Gallerien that has a hidden gem: a cafe/bar on the 7th floor with a fantastic view of the city.

More options are the museums such as the Tiroler Volkunstmuseum, Alpine Club Museum, Kaiserjäger Museum, Das Tirol Panorama and many more. 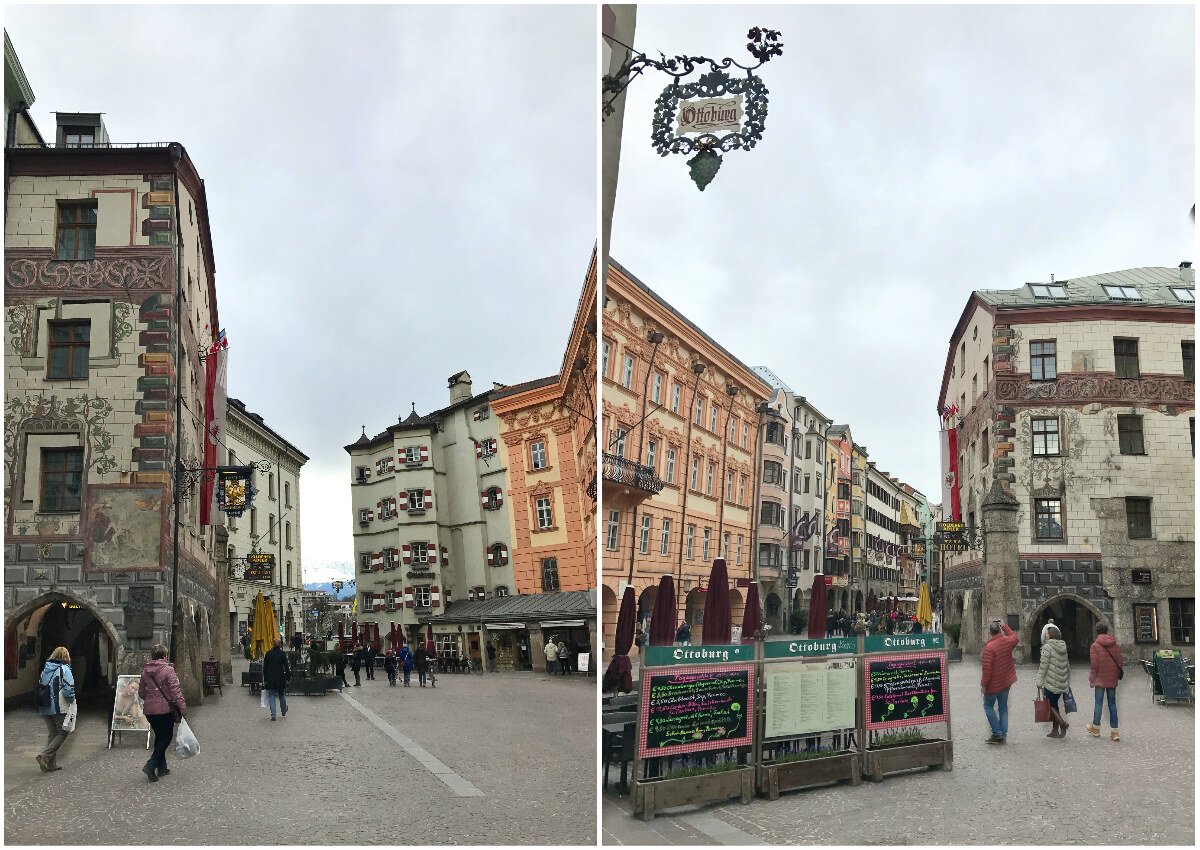 And a bit away from the city centre, there is:
Schloss Ambras is a castle built in 1563 in Renaissance style. The castle is at the top of the hill overlooking the city. Unfortunately, we didn’t have time to visit, but the prices are £12 (April to October) and £8 (December to March). It is closed in November.

Bergisel Ski Jump is a is a ski jumping hill whose stadium has a capacity of over 26,000 people. The tower reaches 47 meters and provides panoramic views.

Nordketten (2256m) is the closest ski station in Innsbruck. Take the train from the Congress station and go to Hungerburg station (8 min ride). For those who are driving, it is best to go straight to Hungerburg. Parking is free.
In Hungerburg (1000m) take the cable car to Seegrube and then another cable car to the Hafelekar. Both have a restaurant. The pistes are intermediate. Prices: at around €33, however, with Innsbruck Card is free. 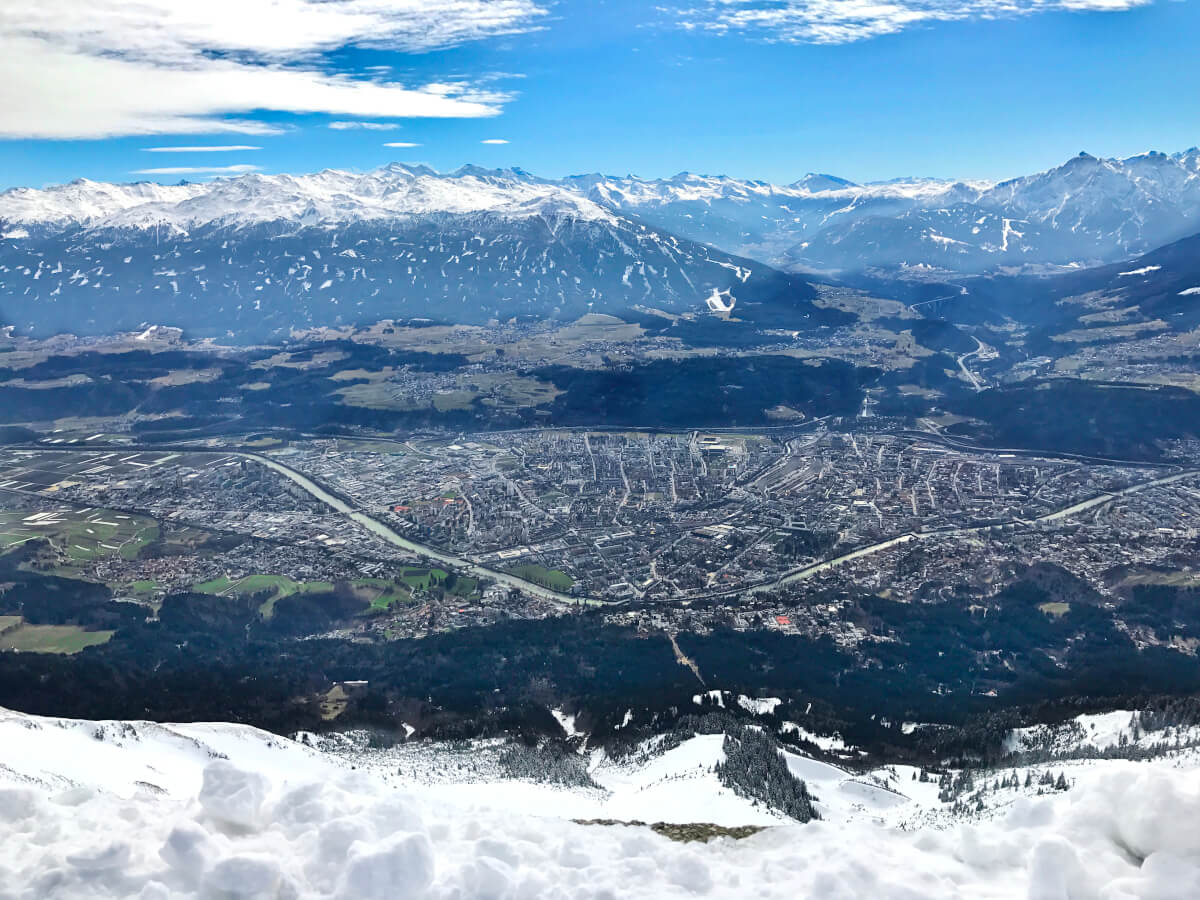 You may buy the Innsbruck Card from 24hrs (€ 43), 48hrs (€ 50) or 72hrs (€ 59). The card offers:
– free one-time admission to all of Innsbruck’s tourist attractions,
– free use of public transport
– free-riding on Innsbruck’s hop-on hop-off sightseeing bus
– one return trip on each lift and cable car around Innsbruck (Axamer Lizum, Drei-Seen-Bahn in Kühtai (summer only), Glungezer (summer only), Muttereralm, Nordkette, Oberperfuss Rangger Köpfl and Patscherkofel)
– many more deals, as you can check here: https://www.innsbruck-shop.com/en/innsbruck-card.html?___from_store=de

Don’t forget that on Sundays a lot of restaurants and shops are closed.

In the evening go to the fun Tyrolean Show, at Restaurant Gasthaus Sandwirt, which features folk and tap dancing, as well as typical Tyrolean and yodelling songs. It costs €30 per person with a drink included. Address: Reichenauer Straße Street. Bear in mind that if you are in the city centre, you will need a taxi to go over there. 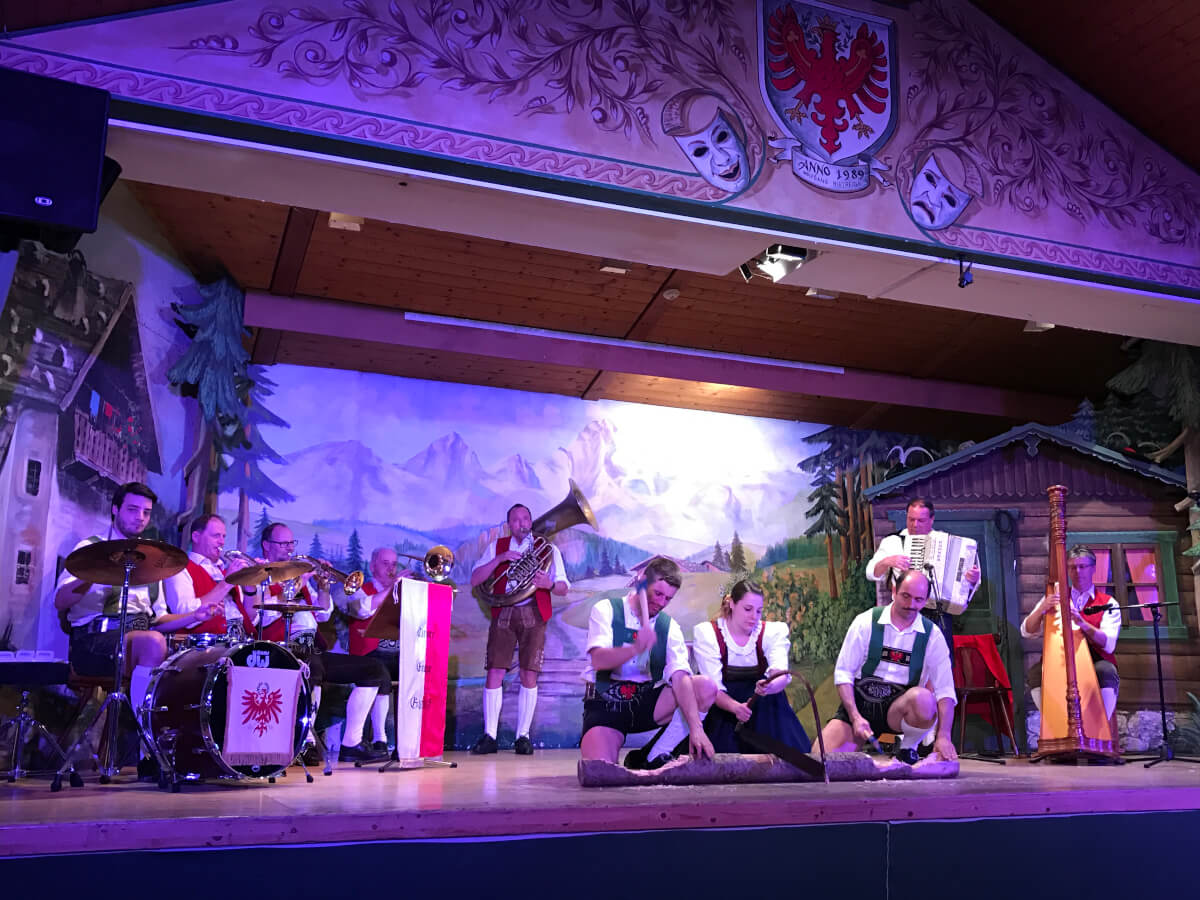 As I’ve mentioned before, there are a lot of ski resorts nearby Innsbruck.
Every morning, several free buses run through some of the city’s hotels picking up skiers. Still, all of these buses go to a central point from where they depart for each of the ski regions (ask your hotel about it).

Igls – Patscherkofel – it has the best infrastructure. Hence the Winter Olympics were there. To get there, you’ll have to take a train (or drive) from the city centre to Igls (7 km south of Innsbruck) and from there take the a cable car. It has easy, intermediate and advanced slopes. Ski pass: €39.

Axamer Lizum – I’ve written a post about it here.

Muttereralm (1800m) is in the village of Mutters and only 10 minutes from Innsbruck. It has red, blue and black tracks and has 4.7km of sledging. It has a stunning view of the Götzen Slope. It is considered one of the most beautiful Alps in Austria. Ski pass: €35.50

Glungezer – Tulfes (2300m) is 9km from Innsbruck and has the longest ski slope: 15km. One of the smallest ski resorts and therefore less crowded than the rest. With only intermediate lanes and no sledge. Ski pass prices: €33.

Rangger Köpfl (2000m) is located in Oberperfuss, around 12km from Innsbruck. It has a 10km sledge runs with restaurants along the way, such as the Gasthaus Sulzstich and Gasthaus Stiglreith. To get there, take the lift to Stiglreith. Easy and intermediate tracks. Ski pass: €34.50

Kühtai (2020m) is about 30km from Innsbruck. It is known for being family-friendly. It has easy, intermediate and advanced slopes. It is said that when there are wind and clouds in Innsbruck, in Kühtai, the day is always good. Ski Pass: €41.50, but it varies depending on the time of your arrival.

STUBAI VALLEY
Neustift – Elferlifte (2500m) is 20min from Innsbruck and to get there, go to Neustift with the Elfer Panoramabahn. It has 8km of a sledge track; Pinnistal with 8.5km of sledging. Only intermediate ski slope. Ski Pass: €31.50

Serles (2,718 m) is called the “High Altar of Tirol”. It is a small ski resort with only easy and intermediate pistes on a total of 6km. Ski Pass: €32

Stubaier Gletscher (3,210m) is less than one hour from Innsbruck. There is 42 km of ski slopes from easy to advanced. It is considered one of the most family-friendly in Austria. It has an ice cave 30m below. Ski Pass: €50

FYI: All prices on this post were verified in November of 2019. 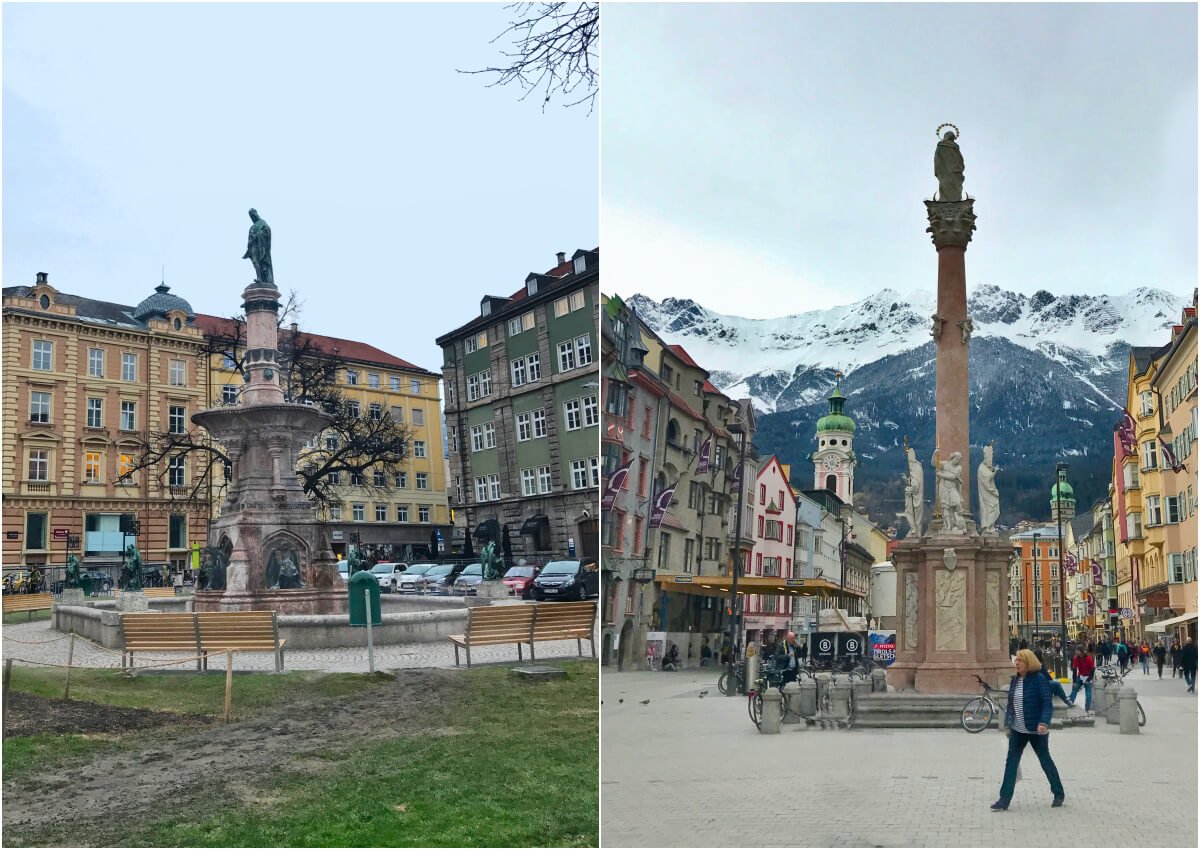 There is no lack of activities to do in Innsbruck.
The city is not only full of attractions, but it is also within easy reach of the Alps. I’m sure you will enjoy it!

The slopes of Radstadt-Altenmarkt in Austria

Axamer Lizum in the Austrian Alps

What to see in Salzburg? Part 2