Home » What to do in Costa Smeralda in Sardinia, Italy?

What to do in Costa Smeralda in Sardinia, Italy?

Anyone who has been to the Costa Smeralda on the island of Sardinia, Italy, knows how gorgeous that place is. Among the islands I visited here in Europe, Sardinia is one of my favourites.

The island is located to the west of Italy and is the second-largest island in the Mediterranean Sea, second only to Sicily, also in Italy (which I visited a few years ago, and I highly recommend it).

We spent 11 days on the Costa Smeralda, and we explored several beaches and towns. But if I could have changed something, I would have broken the trip and stayed half of it in a different area, further north, to avoid driving so much.

Actually, here is a tip I give you: rent a car!
The island is large, the towns are further away from each other, and there are dozens of paradisiacal beaches with hidden access and with a car, it makes it much more manageable. Plus, you can make your schedules, without worrying about public transport (which apparently are not the best).

The Costa Smeralda has beautiful bays and the colour of the sea are breathtaking, hence the name.

That is why every year, Sardinia (or Sardegna in Italian) attracts an impressive number of tourists in the summer season, especially between July and August when school holidays take place here in Europe.

Therefore I advise, if you can, try to go in June or September because the weather is still great, there are far fewer tourists and you can enjoy the beaches properly, not to mention that is much cheaper than in high season.

We stayed in Cannigione, which is just 17 kilometres from Porto Cervo.
I confess that the town and the beach are not so beautiful compared to the others on the island, but we chose it because it is a good starting point for visiting the northern and southern beaches of Costa Smeralda.

The cool thing about beaches here in Europe, in my opinion, is that you can take your own food without fear of being judged. As most of the beaches in Sardinia have no infrastructure and the bars/restaurants are small or mostly non-existent, everyone brings their own snack and drink.

We always carry our thermal bag with a couple of beers, water, iced tea and before we go exploring the beaches, we go to the supermarket or bakery and buy fresh sandwiches with local cheeses and salami, besides purchasing some nibbles. Then we can spend the day exploring, without worrying about getting somewhere and not having anything to eat.

Most beaches in Sardinia have parking, but usually, none of it is free. If the beach doesn’t have it, you can leave the car on the sideroad, without any problem.

What to do on the Costa Smeralda?

As I mentioned, we only travelled the Costa Smeralda, and unfortunately, because the island is vast, we were unable to visit the rest. But even so, there are loads of beaches, beautiful towns and plenty to see and do.

– Tour in the La Maddalena archipelago and Caprera Island (I visited, and it’s terrific! Read more about it here) 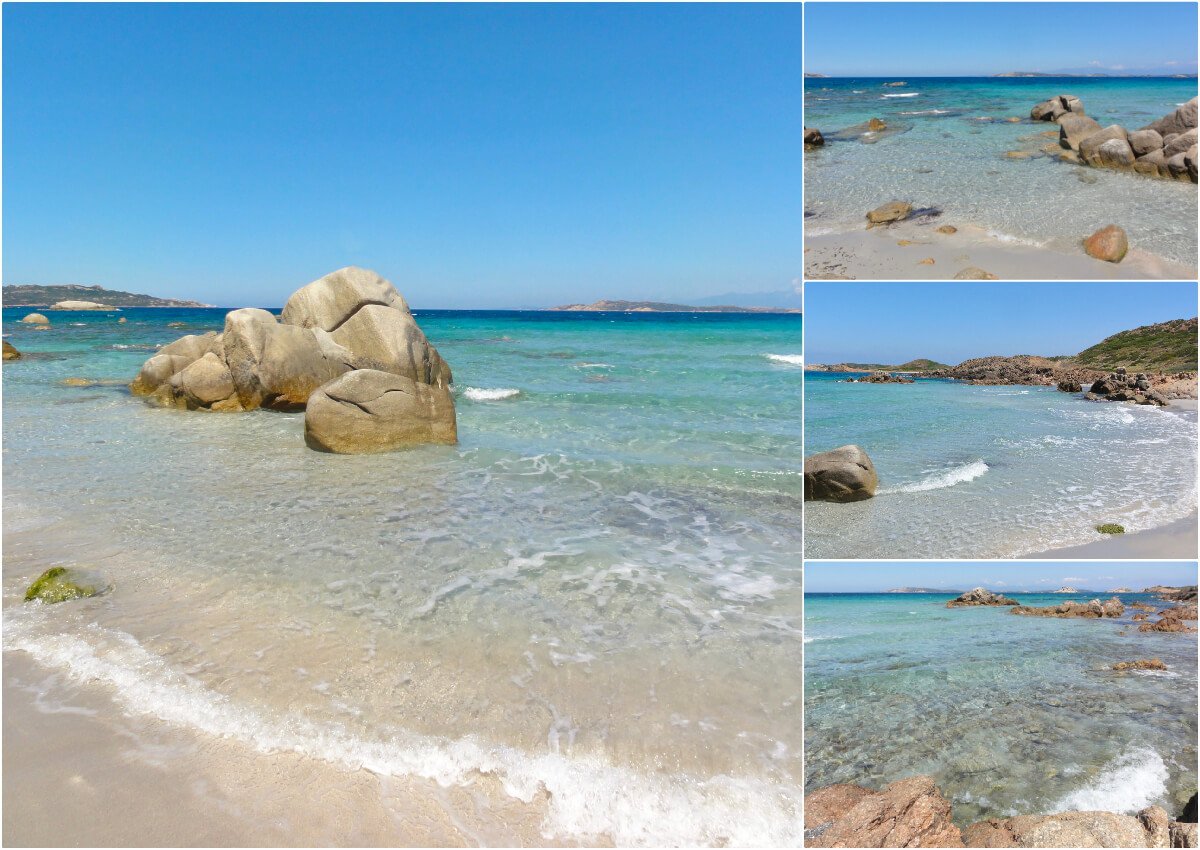 – Boat trip to Isola di Spargi and Isola Budelli (read more here and here) – this tour is imperative. There is no way to describe the beauty of these two islands.

– Visit the beaches, especially the Spiaggia del Principe and Pevero (but there are dozens of other paradisiacal beaches, and honestly it isn’t easy to choose which is the most beautiful. Read more here)

– Some say that the sunset at the Club Phi Beach is gorgeous. We were there in the afternoon, but we were so tired that we didn’t stay to see it. It is a restaurant and a beach bar.

– Visit the archaeological village Nuraghe La Prisgiona, which was occupied between the 14th and 9th centuries BC and is located in the municipality of Arzachena. This village has more than 90 prehistoric houses, covering an area of about 5 hectares.

– Be sure to go to “agriturismo“. They are house farms, where their owners rent rooms, yet it is also a restaurant, where there is no menu, and you pay a fixed amount to eat as much as you like it. Plus the best thing about it is that all the recipes are made only with local products from that farm.

How to get to the island?

The easiest way to get to Sardinia is by plane, getting off at one of the three airports on the island: Alghero, Olbia or Cagliari.

We went through Olbia, as it is the closest airport to the Costa Smeralda and it also facilitates the visit to Corsica (which is easily accessed by ferry from Santa Teresa di Gallura).

You can also take the ferry from different parts like Genoa, Livorno, Civitavecchia, Naples, Palermo, Piombino in Italy, Toulon, Nice, Marseille and Porto Vecchio in France and Barcelona in Spain, arriving at the ports of Olbia, Porto Torres, Cagliari, Arbatax, Golfo Aranci and Santa Teresa di Gallura, in Sardinia.

With more than 200 ferries a week, it is best to consult timetables and locations to plan your trip on this website here: https://www.directferries.co.uk/sardinia.htm

Traditional dishes of the region

In my opinion, Italy is for me the country with the best cuisine in the world. They have food for all tastes and Sardinia has several typical dishes that you will like.
– Porcheddu is a roasted suckling pig and the main dish of Sardinia. The piglet is roasted on the grill for more than 5 hours until the skin is crunchy and the meat is juicy.
– Culurgiones is a pasta similar to ravioli, stuffed with a combination of potatoes, pecorino cheese, garlic, olive oil and mint, creating a delicious flavour. It is usually served with tomato and basil sauce or with butter and sage.
– Zuppa Gallurese has a consistency similar to lasagna. It is a mixture of slices of bread (different types can be used), cheese and lamb broth, baked in the oven and is a traditional dish from northwestern Sardinia.
– Sea urchins, for those who like raw seafood. The time to try this dish is between November and April when the “ricci di mare” season is open.
– Fregola, which means breadcrumbs, is a typical Sardinian pasta made from semolina and rolled into small balls. There are many recipes for cooking fregola, but they say that the most delicious is the one with seafood.
– Bottarga, or Sardinian caviar, is one of the most famous delicacies in Sardinia. They are dried mullet roe and can be thinly sliced as a starter or can be used to accompany pasta, usually spaghetti or linguine.
– Malloreddus, is small gnocchi, made with wheat flour, water and a touch of ground saffron. It is traditionally served as “malloreddus alla campidanese”, where the gnocchi are covered with delicious sausage, tomato ragout and sprinkled with pecorino cheese.
– Seada is a traditional Sardinian dessert, made of fried dough, stuffed with cheese (usually pecorino) with a lemon aroma and covered with honey or sugar.

In addition to the multiple varieties of bread (about 400 types), Sardinia is known for its sheep and goat cheeses, such as pecorino, ricotta, Fiore Sardo DOP, casizolu, Axedu casu, casu marzu, among others.
And as in any Mediterranean, fish is always on the menu, in addition to several fresh kinds of seafood.

Among the typical Sardinian wines, it is worth mentioning the red wines Cannonau, Carignano, Cagnulari and white wines such as Vermentino, Torbato, Vernaccia and Nuragus.

And to help you enjoy your trip even more, I made a summary of the beaches I visited on the Costa Smeralda. Just read here about Baja Sardinia, Porto Cervo and many more. If you what to know more about Spiaggia Del Principe, Romazzino and others, read here. And more about Cannigione, Tanca Manna and a few others here.
A great day and enjoy your holiday in this paradise!

What to do in Moena in the Italian Alps?