Located north of Lake Maggiore, the Verzasca Valley is one of Ticino’s most famous valleys and among the most beautiful in Switzerland.

The Verzasca River, which runs through the valley between Leventina and Maggia, is quite famous because, unlike other rivers, its waters have a fantastic turquoise or emerald green colour, thus receiving the nickname Maldives of Switzerland. 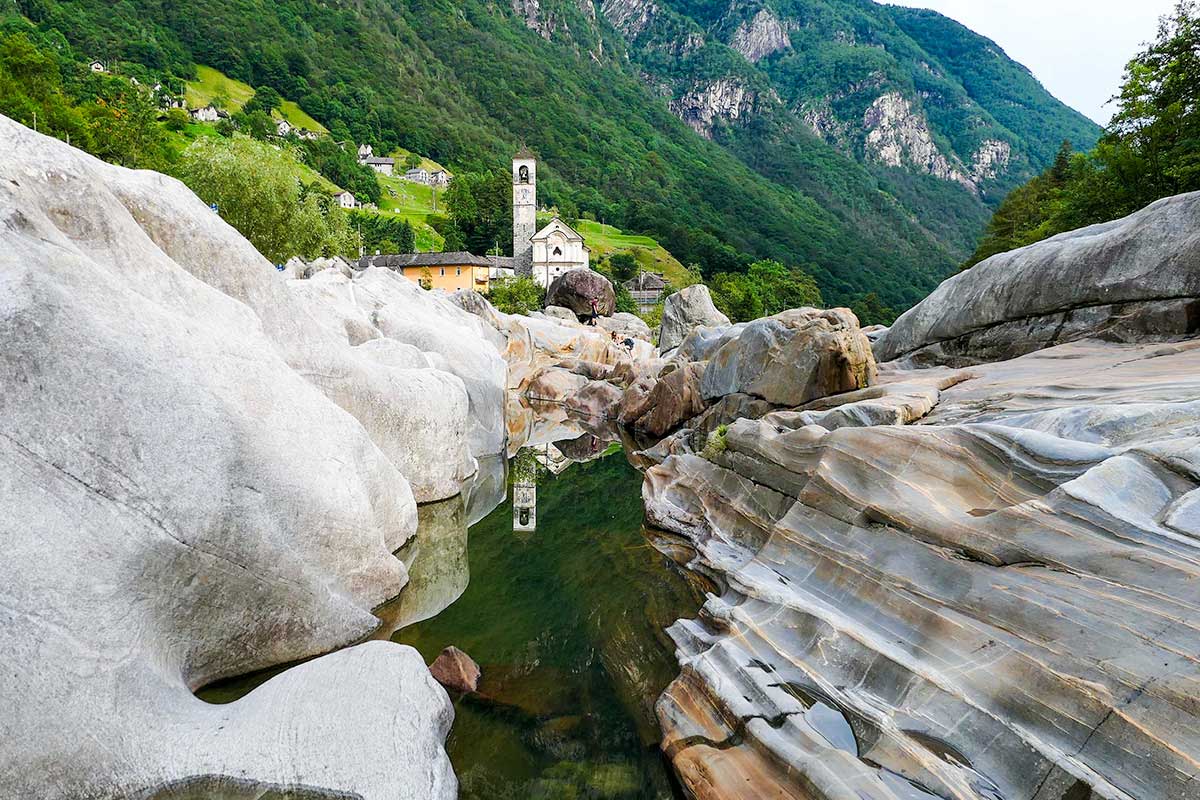 The setting is gorgeous, as beyond the river, the houses here – known as Rustici – are made of grey stone and rough stone roofs, very similar to other valleys in Ticino.

However, tourists’ most popular and sought after part is undoubtedly the Ponte dei Salti. This beautiful arch-shaped bridge was built in the 16th century, partially destroyed in 1868 and rebuilt in 1960.

The place became famous after a video uploaded by a group of Italians went viral, garnering more than 3 million views and making the site a popular destination for Italians and later tourists worldwide. See the video here. 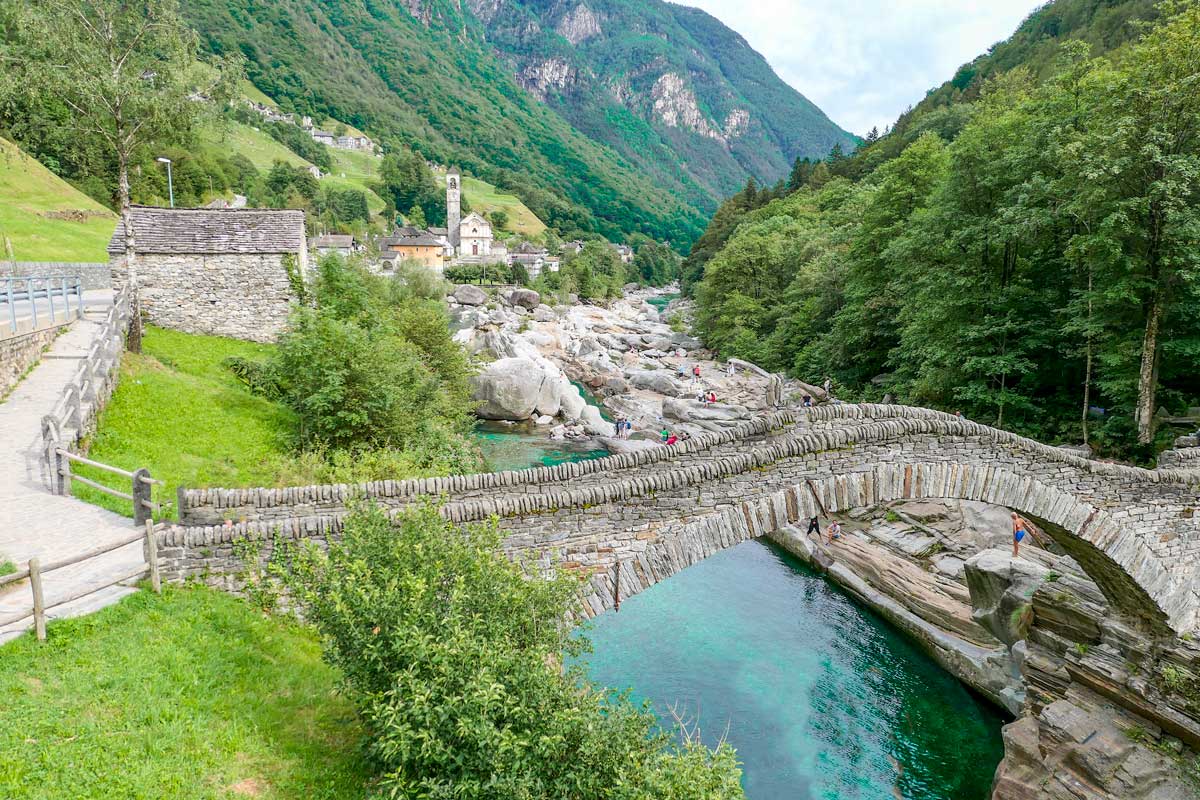 The bridge is located near Lavertezzo, and from it, you can see the little village and a baroque church from the 18th century.

TIP: Don’t forget to visit Grotto al Ponte, a charming restaurant on the other side of the bridge that serves delicious salami and regional cheese.

The scenery is magnificent, and I’m not surprised that so many photos are floating around the internet.

In summer, dozens of people go to the river, bathe and enjoy a sunny day, even though the water comes from the Alps and is definitely cold. I didn’t even dare to go in!

It is important to note that many people drown in the waters as the current is quite strong, and you must be very careful when entering the water.

Another option is to choose one of the several trails in the area, among them one that goes by the river and with spots where you can have a picnic.

For you to have an idea, in recent years, this place has grown so popular that the residents of Lavertezzo have been campaigning for tourists to stop visiting it, as they do not collect their garbage and are damaging the bridge and its surroundings. 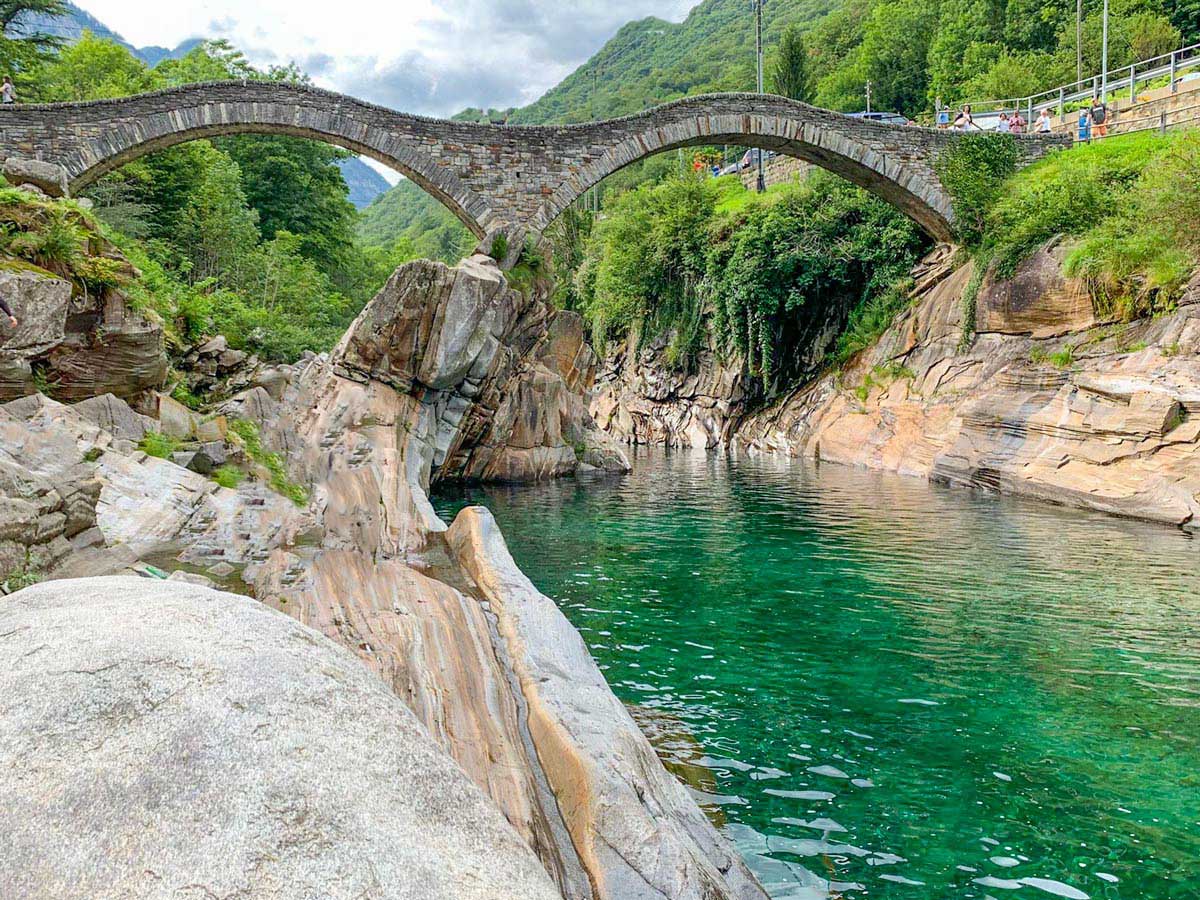 In addition to Lavertezzo, the social media star, there are several other villages that you can also explore in the Verzasca valley.

Take a look at Corippo, a picturesque hilltop village with very few inhabitants.

Or you can walk through Sonogno at the end of the valley. It’s fascinating, and it will feel like stepping back in time. Here, there are no modern houses. Instead, you only see traditional stone houses. 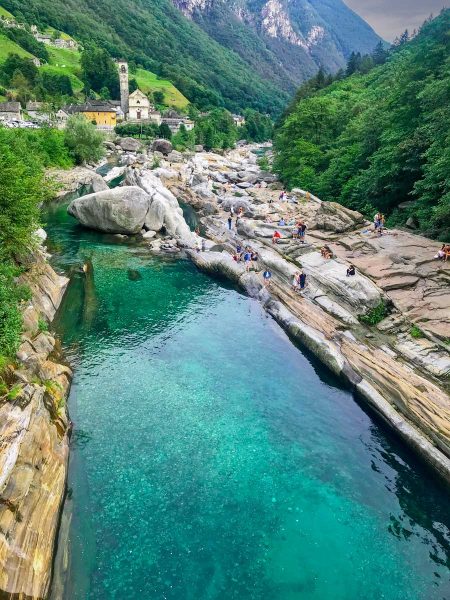 How to get to Ponte dei Salti, Verzasca Valley?

There is no way to lose sight of the place, as there are probably hundreds of cars parked nearby, and many people are walking near the bridge or jumping into the water.

By car
The best option is to drive through the beautiful valley, just 22km from Locarno. There is a small parking lot just after Lavertezzo.

By train
The nearest station is in Tenero, where you should take the bus.

By bus
The best option is to check the timetables and routes on the Post Bus website here.

Anyway, if you are in Tenero, Locarno or Ascona, the Verzasca Valley is an excellent option for a day trip.
Just make sure you have your camera/phone with you. There’s no way to avoid taking dozens of photos!

Have you heard about Lake Caumasee in Switzerland?