The sunny climate, the long pebble beaches and the tranquil bays with crystal clear water make Makarska Riviera one of the most beautiful and sought after regions in all of Croatia.

Plus, the whole riviera has an incredible history as it was occupied by Romans, Turks, French, Venetians and Austrians, leading to various architectural and culinary influences.

The Riviera is a trendy tourist destination, not only because it is easy to get around and its infrastructure but mainly because of its natural beauty.

There is about 60 km of beaches ranging from the city of Brela in the north to Gradac in the south of the Croatian coast, and the entire area lies between the Adriatic Sea and the imposing Biokovo Mountain.

The highest peak of the impressive Biokovo Mountain is Sveti Jure (Saint George). It is 1762m above sea level, being the highest mountain in Dalmatia and the second highest in Croatia.

Part of its area is protected by the Biokovo Natural Park, where there are dozens of trails for hiking, cycling, etc. However, if you are not up for an adventure as I wasn’t, you can drive up until a certain point and still have an incredible view of the Croatian sea and a few islands.

I travelled to Makarska in early September, and the weather was pleasant, with an average temperature of 26-27 degrees during the day and around 22-23 at night.

Usually, I prefer to travel in September, since it is no longer a summer school holiday in Europe. Therefore, the places are less packed than July and August, when most summer destinations get really crowded, plus the flights and hotels were cheaper.

I spent 9 days in the region, staying in the small town of Tučepi. I chose Tučepi because of its location, so I could explore the north and the south beaches and villages of Makarska without spending too long inside the car.

However, if I could have changed something, I would have split the stay into two different areas of the riviera or stayed longer on the island of Korčula, where I spent five days before going to the Makarska Riviera (read more here).

I mention this because I prefer more secluded, more “natural” beaches. The island of Korčula is like a paradise compared to the Riviera, which has more developed cities taking away a little of the rustic part that I like so much.

Most tourists who travel to the Riviera base themselves in the popular cities like Makarska, Baška Voda, Tučepi, Podgora, Gradac or Brela and take day trips to the beaches and neighbouring islands.

Actually, one suggestion I can give you is: if possible, rent a car! The beaches/villages are further away from each other, and dozens of paradisiacal beaches are difficult to access. With a car, it makes it much easier, and you can make your schedules, without depending on public transport, which according to the locals, is not so reliable.

Each day I would go to a different beach/town, and one of the days, I took the ferry from Drvenik and went to Sućuraj to visit the stunning island of Hvar (read more here). From Sućuraj, I drove towards Jelsa and checked out several other beaches on the way.

The Makarska Riviera has many beautiful beaches, therefore I am only going to mention a few of them.
Near Brela and Vruja, you will find several lovely bays where you can enjoy your holiday. Another famous place is Nugal Beach, but I didn’t have time to visit.

Though, if you’re looking for beautiful views, the beaches of Mala Duba (Živogošće), Plaža Djevičanska (Igrane) and Plišivac (Podgora) were some of my favourite beaches in the area. I will write an article about these places very soon.

Makarska is one of the oldest towns of the eastern Croatian Adriatic, going back as far as 6000 BC.
Nowadays, it is the main town on the Riviera. It is very charming with its beaches, a lovely harbour, a pleasant wide pedestrian promenade, a beautiful central square and many more attractions. 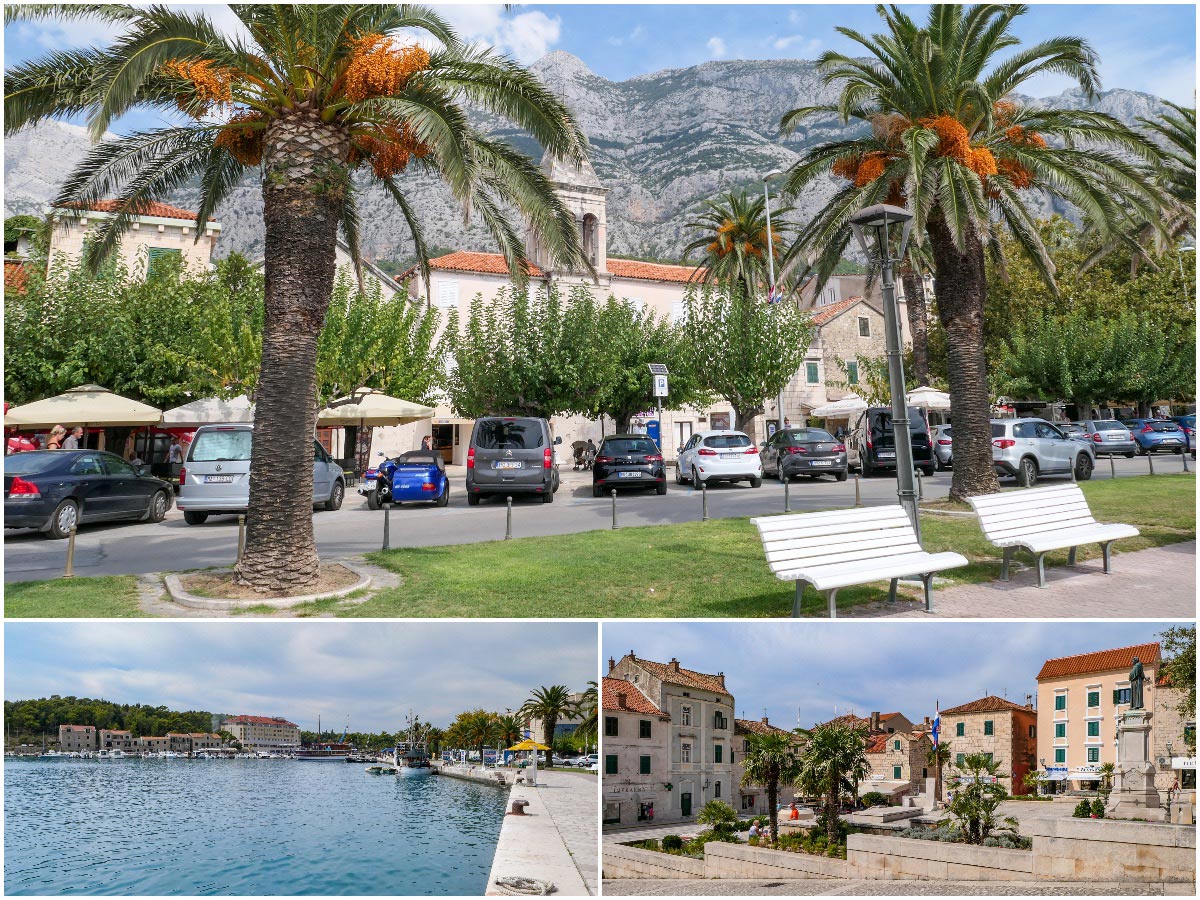 I didn’t stay there because the town is full of tourists during the high season and some people complain about the traffic jams, the busy beaches, etc.

Although, I went a few times during the day to stroll around, to appreciate the town and have an ice cream (which is so good that it reminds me of the Italian gelato).
I also went in the evening to enjoy the live music that usually happens in the summer season and have dinner in some of the renowned restaurants.

What to see and do in Makarska Town?

– Kačić Square is the charming main square overlooked by the Baroque Church of St Mark. In the summertime, it has live music, and people gather around to enjoy;
– Visit the open-air market behind the church, with fresh products, including fish and meat;
– walk around the alleys of the town, especially around the central square;
– lighthouse of St. Peter;
– stroll in the harbour, where there are several cafes and pizzerias and from where excursion boats depart for the island of Hvar and Brač;
– wander along the seafront, where there is a beautiful path, between Gradska Plaža and Makarska Beach;
– Makarska Municipal Museum;
– Malakoloski Muzej whicj is a shell museum;
– The Franciscan Monastery of the Assumption of the Blessed Virgin Mary;
– Makarska Zvjezdarnica is the town observatorium;
– Merces shopping centre, it’s small, but you can find some stores, a pharmacy, a supermarket and a bank.

How to get to the Makarska Riviera?

By plane
The nearest airport is in Split, which is under two hours drive away. From Dubrovnik Airport to Makarska or Brela, it takes about 2 ½ hours driving.

By bus
There are several buses per day from Split to the Makarska Riviera towns and coming from other areas of Croatia as well. You can see the timetable departing from Split on this website  and from Dubrovnik on this.

By car
As usual, the best way to explore the different beaches is by car, as you can go to secluded coves and view more of the offbeat beaches, which are stunning.

One of the best parts of the trip is to try the traditional cuisine and Croatia has some fantastic food.
Try to visit a Konobas, which are restaurants with a simple menu, local products such as sheep’s cheese, smoked ham, anchovies and local wine.

Being a cow, lamb and goat farming region, one speciality is Kastradina, a stew made with dried and smoked lamb, mutton or goat meat.
Another typical dish is the famous Pasticada, a marinated and roasted beef cooked in a rich, red sauce and served with either gnocchi or homemade pasta.

A lovely day trip from Makarska is to make some Croatia island hopping, and you can easily book a boat excursion from the harbour that includes stops at two of Croatia’s best-known beach spots: Hvar and Brač. 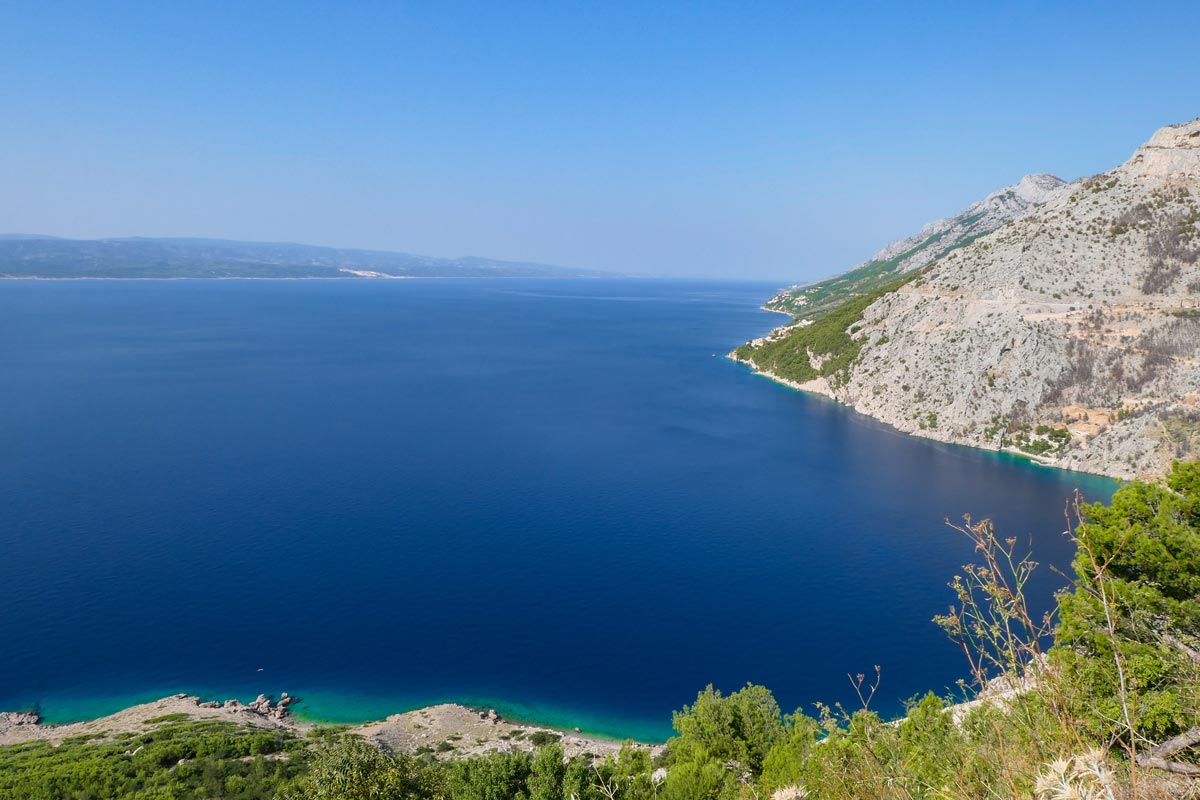 From beaches to mountains, from hiking or visiting museums, from crowded places to secluded spots, the Riviera offers a little bit of everything and for every taste and without a doubt is an excellent place to spend a few days during your holiday.