Home » The mysterious Stonehenge in England

The mysterious Stonehenge in England

One of the most famous prehistoric landmarks in England and probably in the world is, for sure, the Stonehenge.

Stonehenge is still shrouded in mystery. And despite various research done on the site, historians and archaeologists have not yet concluded the purpose and meaning of the site. All this mystery, combined with mysticism, has made Stonehenge one of the UK’s most visited attractions. 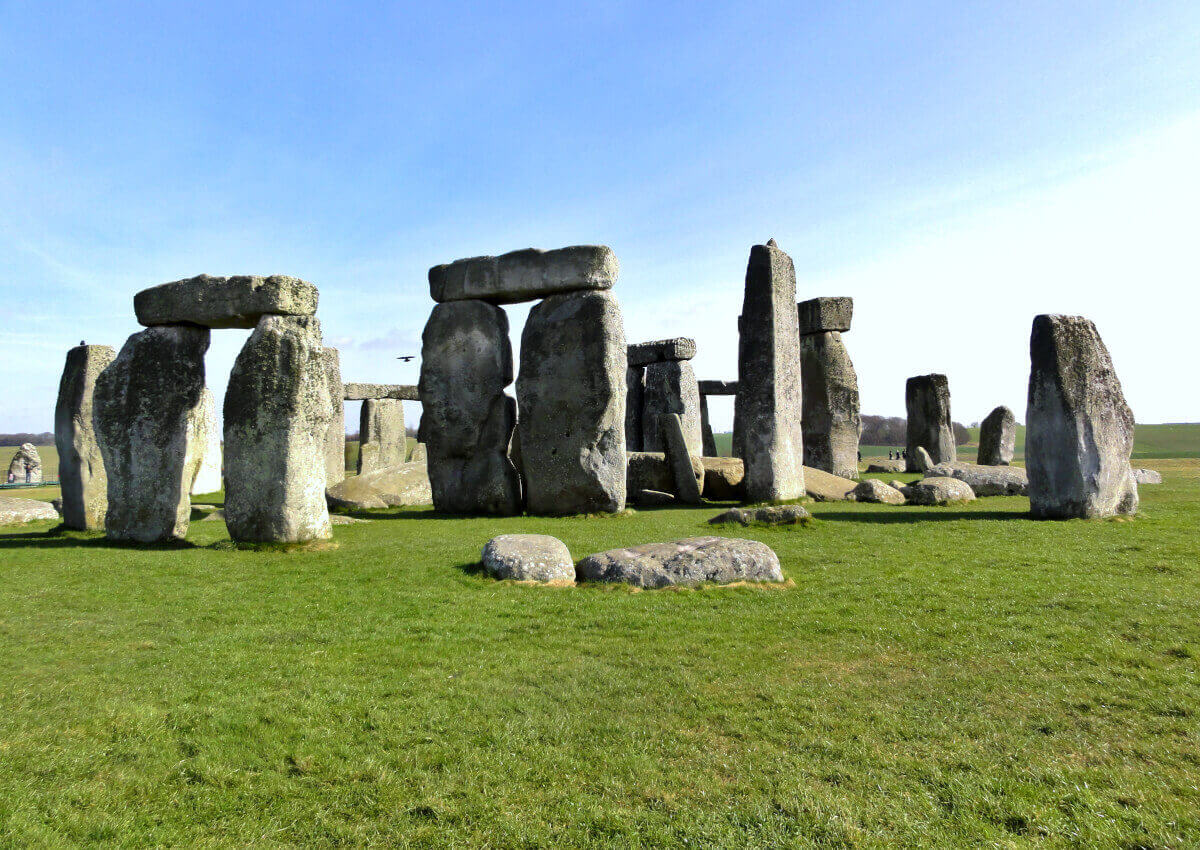 Although there is a lot of information about the area, I will briefly resume Stonehenge’s history.

According to Archaeologists, between 8,500 and 7,000 BC, there were four or five pits in the proximity of where the monument is now, three of which appear to have supported large pine totem poles.
However, it is not known whether this could be related to the later monument of Stonehenge.

Perhaps, because at that time, much of southern England was covered in woodland, the lowlands and wide open was a stable area.

For that reason, it was the chosen site for a monument complex from the early Neolithic period, including two cursus monuments, Robin Hood’s Ball and several long barrows, all dating back to around 3500 BC.

According to the English Heritage website, the first major known event was the construction of a circular ditch with an inner and outer margin, built around 3000 BC and was one of the early forms of henge monument.

Within the bank and the ditch, some wooden structures located just inside the bank held 56 wells, known as Aubrey’s Holes.

In and around the Aubrey Holes, about 64 cremations were found and perhaps as many as 150 individuals were buried, making it the most extensive Neolithic cemetery in the British Isles.

The presence of these monuments probably influenced the later location of Stonehenge. However, the unique stone circle was only erected around 2500 BC. 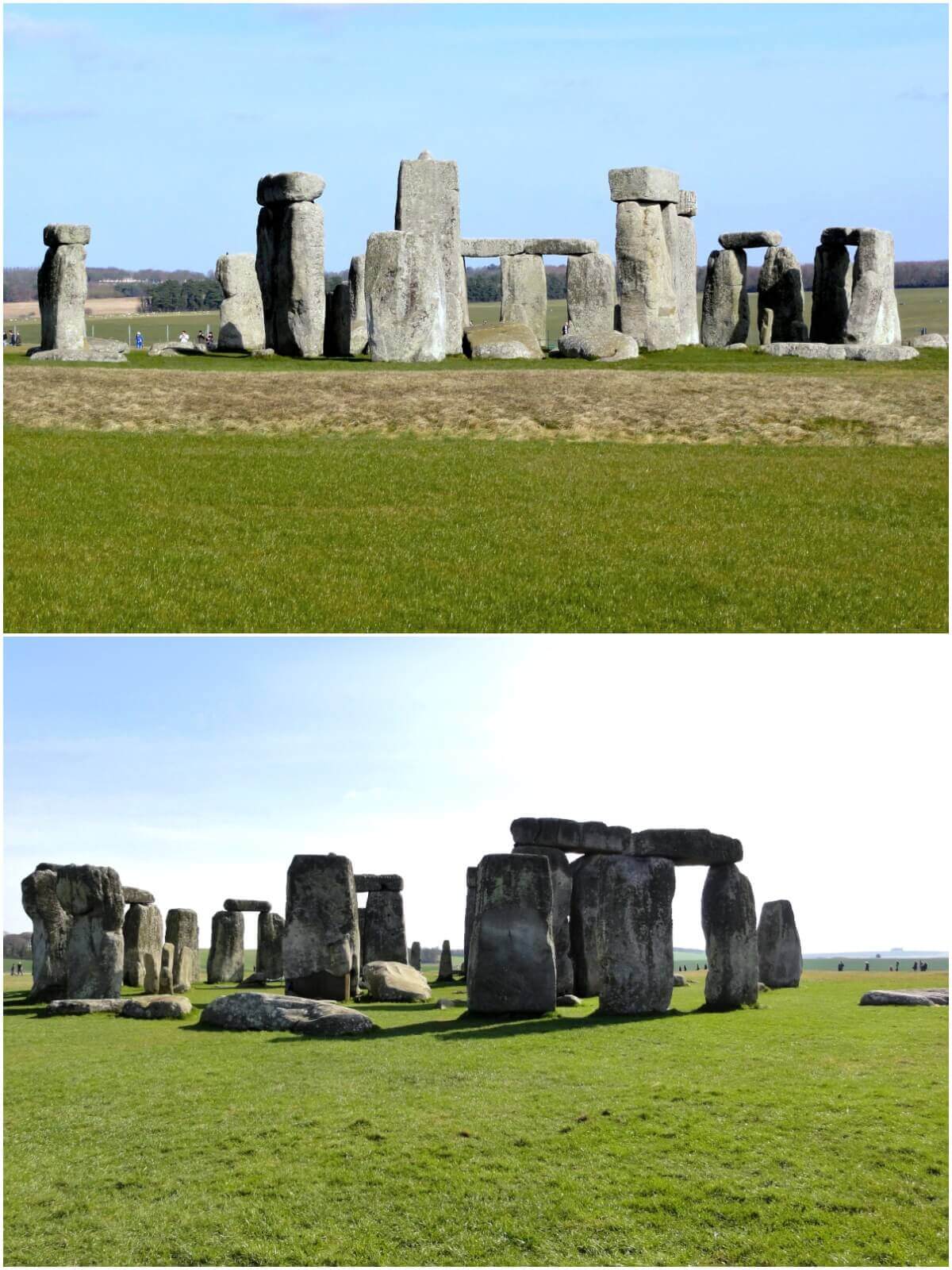 Two types of stone were used: the sarsens, which weigh around 25 tons, with the largest stone, the heel stone, weighing about 30 tons and were erected in two concentric arrangements, and the bluestones weighing between 2 and 5 tons each and placed between the sarsens forming a double arch.

About 200 or 300 years later, the central bluestones were rearranged to form a circle. Also, at that time, it was built a road connecting Stonehenge with the Avon River.

Recently, the theory that these stones were brought in from Marlborough Downs, 20 miles (32 km) away has been proven, with a specific area discovered where the sarsens came – West Woods, southwest of Marlborough.

The bluestones, which weigh between 2 and 5 tons each, are of varied geology but all came from the Preseli Hills in southwest Wales.

To raise the stones, large holes were dug with an inclined side and the bottom lined with wooden stakes.
The stones were then moved and hoisted vertically using vegetable fibre ropes and probably a wooden A-frame. Weights may have been used to help place the stone vertically. The hole was then compacted securely.

Wooden platforms were probably used to raise the horizontal lintels. Then, the final step of shaping the tenons took place, to ensure a good fit in the lintel fitting cavities. 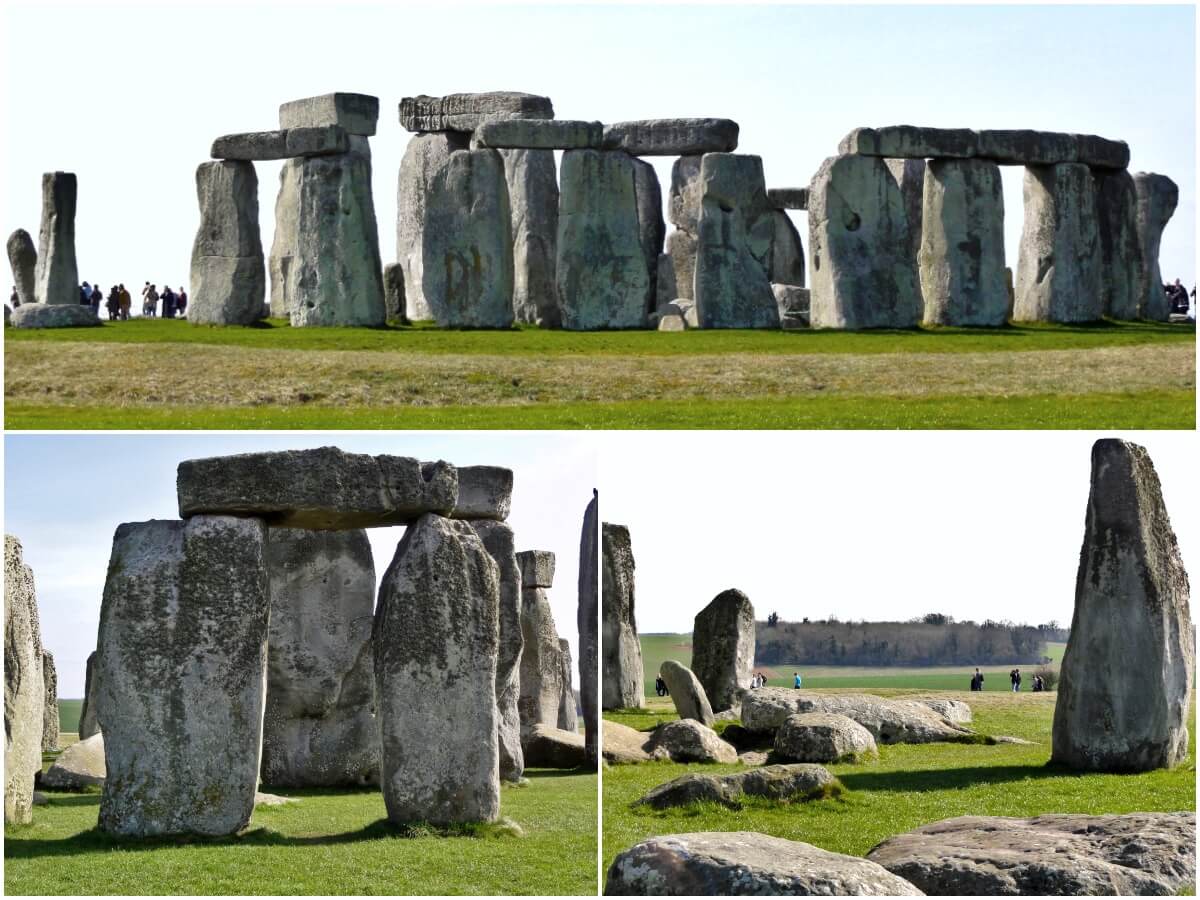 Since then, there have been many tales about the place, what it was for, its purpose, and several mystical theories were created.

What is known is that Stonehenge probably served as a “meteorological” site as it is a great place for astronomical observation, especially during the summer and winter solstices.

On June 21 and December 21, the longest and shortest days of the year in the northern hemisphere, countless visitors invade Stonehenge at dawn to see the sunrise perfectly aligned with the monument’s stones.

How is the visit to Stonehenge?

I’ve been there 3 times, and there is no doubt that the stones are impressive. It is hard to envision how they ended up there and the real meaning of it.

You normally don’t need to book the tickets in advance, but with the COVID pandemic, pre-booking ticket is a must.

Outside the visitors Center, it is possible to see life-size huts in perfect reproductions of what was to live in the Neolithic era, with thatched roofs and mud walls. Also on display is a replica of the sledges used to pull the massive stones that form Stonehenge. 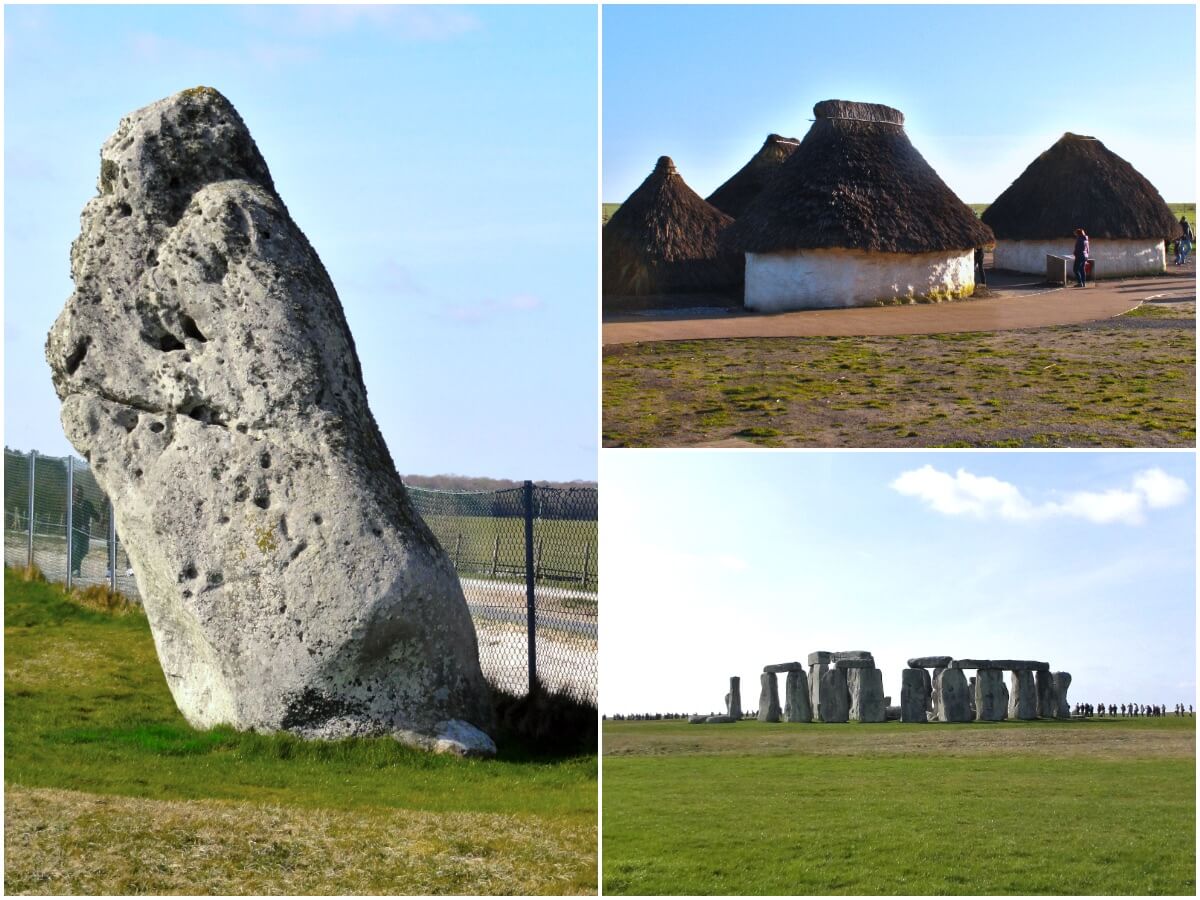 An exhibition on the visitor centre contains nearly 300 archaeological objects, finds from Stonehenge and other nearby monuments.

You can picnic in the monument field with the Stone Circle view or other designated points around the Visitor Centre and landscape. But before you do that ask which locations are allowed, okay?

And remember, the entrance only allows for walking around the monument. There are special passes where you can walk among the rocks, but you must buy well in advance (to reserve a ticket click here).

Stonehenge is part of World Heritage Sites, which is a landmark or area with legal protection from the United Nations Educational, Scientific and Cultural Organization (UNESCO).

The site is also part of the National Trust (read more here and here) the English Heritage (more info here).
But, if you can’t visit, why don’t you have a look at their virtual tour? Check it out here.

TIP: If you would prefer not to donate, ask for your ticket to be ‘without donation’ and the same right of access applies. The donations are to help keeping and maintaining the are. 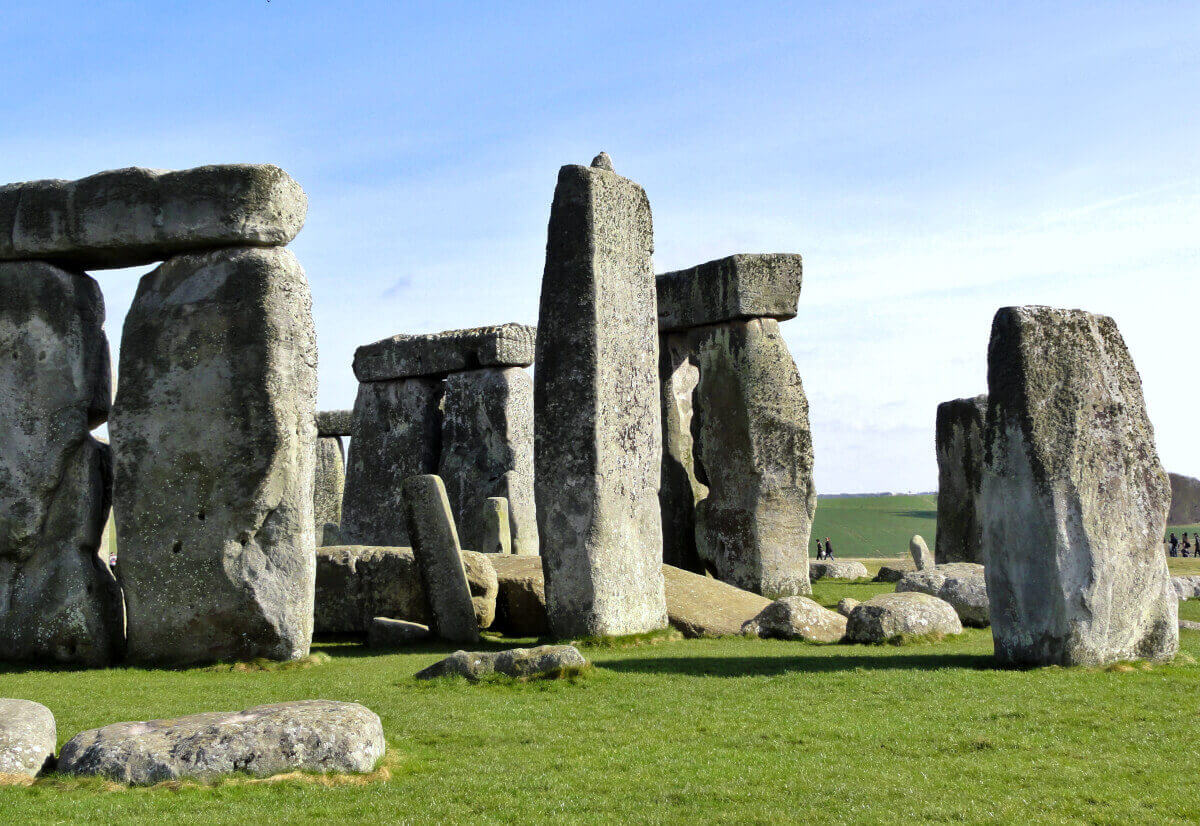 How to get to Stonehenge?

By car
Postcode: Wiltshire, SP4 7DE
Parking is available on site and costs £5, but it is fully refundable when purchasing a Stonehenge ticket.
A Visitor Bus service frequently runs to the visitor centre, for those who need it, and takes around 10 minutes to reach the Stones.

By bus
Several companies do day-tour coming from different cities in England.
The best site to know for sure timetables and routes is: https://www.connectingwiltshire.co.uk

By train
You can have a look at the Wiltshire County Council’s website for the most up-to-date guidelines and information: https://www.connectingwiltshire.co.uk

I hope you have a lovely time on this impressive landmark and if you have any question or tip, please share with us on the comments below.