Home » The little town of Füssen, near Neuschwanstein Castle

Füssen is a tiny town in southern Bavaria, Germany and just about a kilometre from the Austrian border.

Most people know this town because it is a few minutes driving from Neuschwanstein and Hohenschwangau Castle.
Also, Füssen sits at the southern end of one of Germany’s most famous scenic routes, the Romantic Road (Romantische Straße), that goes from Füssen to Würzburg.

On our way back from Neuschwanstein Castle, we stopped at Füssen to have a glance at the charming town and also to see the Christmas Market.

Because it was getting late and we needed to go back to Munich, my friends and I didn’t have much time for all the things that this cute town has to offer.

We basically just strolled at the streets of the Old Town (Altstadt), appreciating the blend of brightly coloured houses and medieval streets.

The Altstadt has many souvenir shops, bars, restaurants, cafes, and the town is surrounded by valleys and mountains that make the scenery sublime.

As I’ve mentioned before, one of the best things to do in Füssen is walking around and enjoy this cute town. Still, there are a few things to see as well, such as:

Hohes Schloss or High Castle of Füssen is nowadays a gallery of the Bavarian State Collections of Paintings, which focuses on late Gothic and Renaissance works of art.

St Mang’s Abbey was a monastery, and it is the home of some of the oldest fresco paintings in Germany. At the south side is the Füssen Museum (Museum der Stadt Füssen).

Museum der Stadt Füssen is all about the town’s historically significant centre for violin and lute production.

Stadtbrunnen is a fountain with a statue of Saint Magnus standing in the middle of cafes and shops.

Lechfall is a waterfall with beautiful colour and merely a short 15 minutes walk from town.

Kalvarienberg is a trail which symbolizes Jesus carrying the cross to his death, so you will be passing by “stations of the cross” until you get to the peak at “Calvary”. I didn’t do it, though I’ve read that the trail is for about five miles and the views are remarkable.

Heilig-Geist-Spitalkirche this outside painted church is quite small but richly decorated inside. 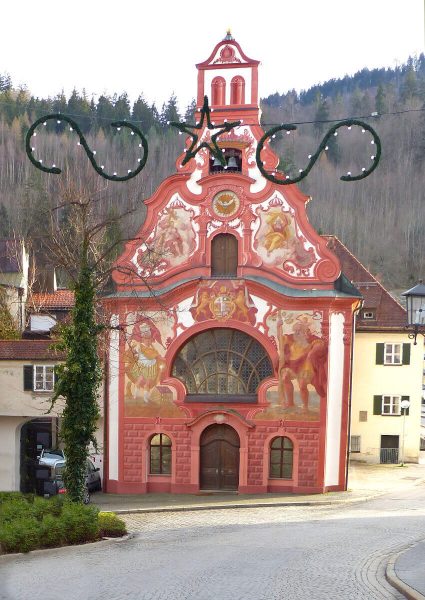 The following one is actually between Füssen and Neuschwanstein, but if you have time to stop and have a look, you will have a nice view of the valley, mountains and the castle.

St. Koloman (Coloman) is a baroque church setting lonely in the middle of a field.

Füssen is around 125 kilometres away from Munich.
To reach you can catch the train from Munich Central Station and it takes around 2 hours.

From Innsbruck (Austria), it is only 109 kilometres away. However, to get there, you would need to catch several buses, and it can take half-day or more. Thus I suggest renting a car.

Or, if you are up to for walking, it is four kilometres away from Neuschwanstein Castle, and it can be reached on foot via a series of trails.

So don’t forget to have a look and stroll around Füssen. You won’t regret it! I assure you!
Have a lovely day! 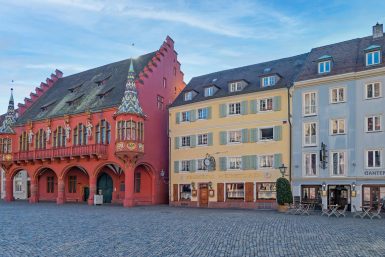 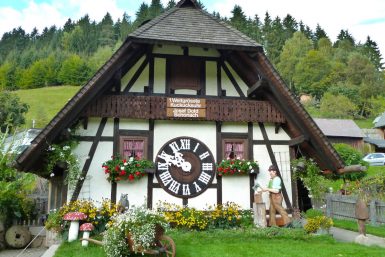 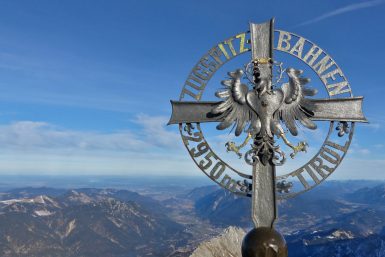 Zugspitze, the highest mountain in Germany