Santo Antônio de Lisboa is one of the oldest neighbourhoods of Florianópolis in Santa Catarina, having been founded in October of 1751 but its colonization actually began around 1698.

The strong Portuguese influence of the Azores in Santa Catarina had started in Santo Antônio de Lisboa, which in addition to the neighbourhood is a district that includes the areas of Sambaqui, Barra de Sambaqui and Cacupé.

Buildings, like churches and mansions in Portuguese style and with Azorean characteristics, are scattered throughout the area, and it is a delight to walk around it.

And from the beach, you will have an incredible panorama, admiring the North Bay, the mainland and the famous Hercilio Luz Bridge.

– The beach, which is very beautiful but supposed to be not suitable for swimming.

– The Street Market, or as it is better known, Feirinha de Santo Antônio de Lisboa. There you will find books, clothes, jewellery, handicrafts, paintings and pieces made with billet lace, a technique inherited from the Azores culture.

Along the harbour, there are several gastronomic options. There are bars and restaurants for all tastes, and several of them have seafood as its main dish, being the oyster the most famous delicacy of the place.
Plus the most enjoyable thing is that several of them have their decks and porches over the beach. Do I need to say anything else?

Because it has so many restaurants located in both Santo Antônio and the neighbourhoods next door, the region ended up known as the Gastronomic Route of the Sunset.
And this name is due to the fact that the area has the most beautiful sunset in Florianópolis.
Too bad that every time I go there, it’s kind of overcast and I can not see this sunset in all its splendour…

The neighbourhood is about 16km from the centre of the city, and I believe the easiest way is to drive there.

Despite having a well-integrated public transport, the distances between the beaches in Floripa are usually far, and the bus rides can be very time-consuming. Especially in the summer, when the city traffic gets very chaotic.

I guess there must be more bus lines that go to Santo Antônio, but I do not want to write here, as it is information that I’m not too sure about it.

This is it guys, I’m sure you’ll love Santo Antônio de Lisboa and after the tour, do not forget to tell me how it was there, okay?
A big hug! 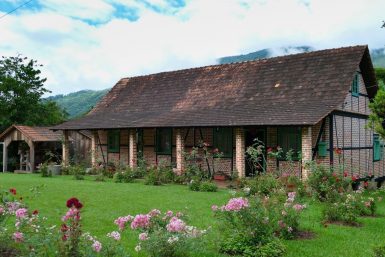 Morretes and Antonina, a hidden gem in South Brazil