Glenfinnan Monument and Viaduct in Scotland

Last time, I have written about the impressive Cairngorm National Park in Scotland and a few things that we have done while there, so now is time to write about another part of the journey.

After spending the day in the Park, we drove to and slept in Spean Bridge.
The village is small, and honestly, there is not much to see or do, but as it’s on the way to the National Park and is also close to Fort William and Ben Nevis, the town is packed with Bed and Breakfasts. And from what I’ve seen, it is also a starting point for the various trails existent in the area.

Anyway, the next day we woke up early and we headed to Nevis Range Mountain Experience in Ben Nevis, which is the highest mountain in Britain.
We were there too early, and we couldn’t go to the top via gondola because it was closed and we didn’t want to wait 40 minutes until it would open (10 am in the summer).

I know you can hike there, but we didn’t have enough time and truth to be told, I was not up to the challenge (I never am!).
The gondola is open all year round except in November when they close it for annual maintenance. More info here: https://www.nevisrange.co.uk/mountain-gondola/times-and-prices/
I can’t believe that I completely forgot to take pictures of the Ben Nevis… I am still learning how to be a blogger! So sorry!

After Ben Nevis, we drove to Glenfinnan an I have to say that the route scenery towards there is astounding. You drive along the Loch Eil as the Jacobite steam train does and it is a beautiful journey. 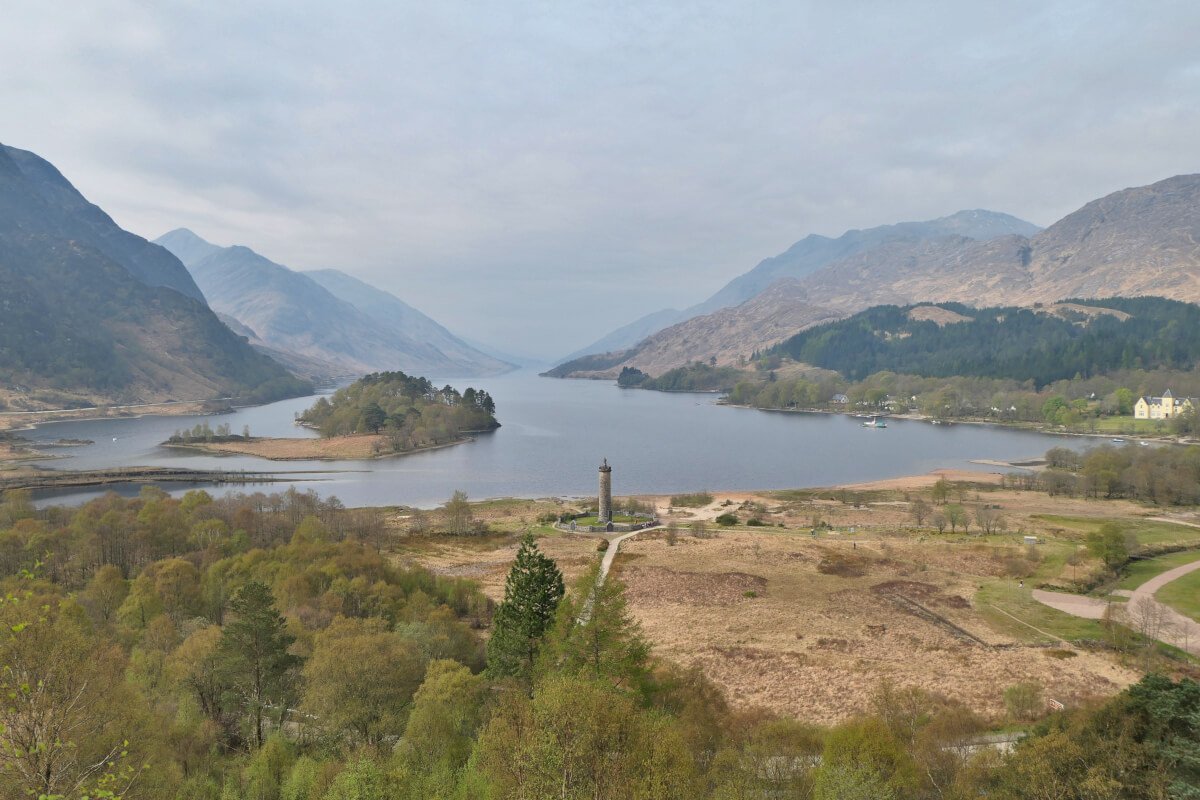 – Glenfinnan Monument is a tribute to those who perished fighting the Jacobite cause. It is part of National Trust for Scotland. Car Park Post Code: PH37 4LT. Members can park for free, or there is a small fee for non-members. 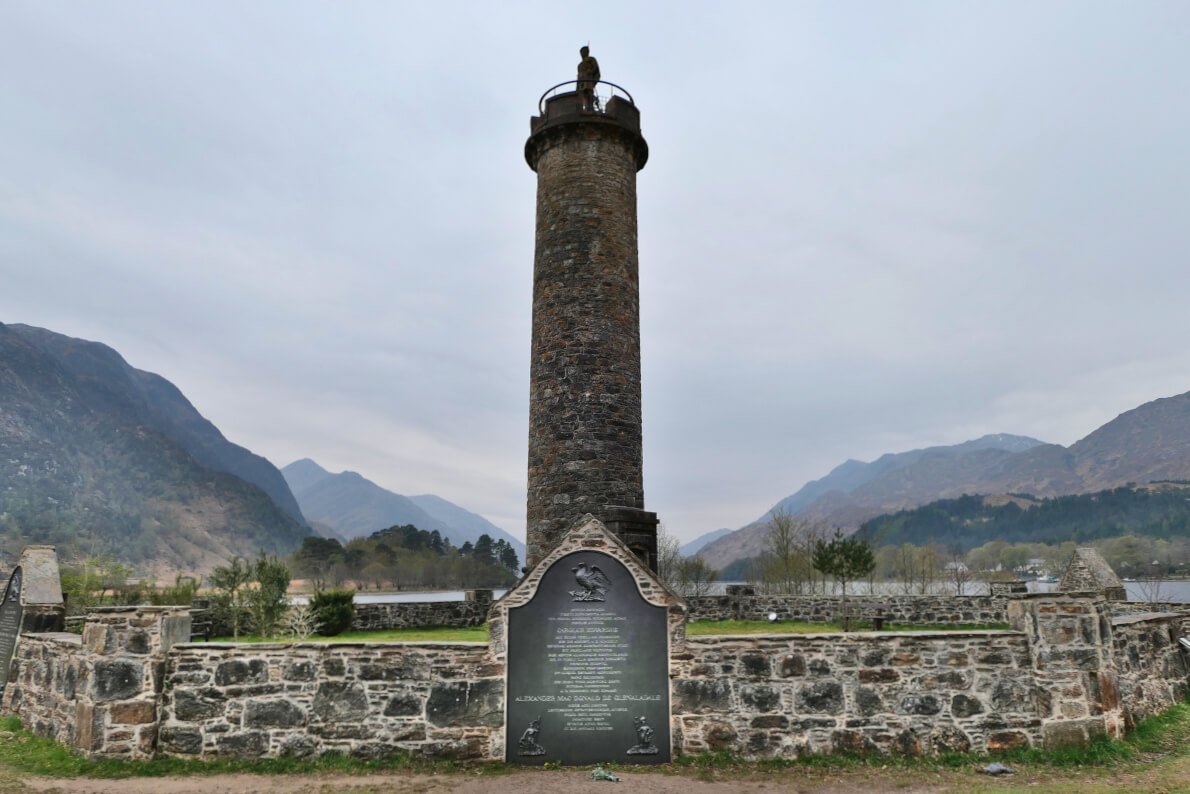 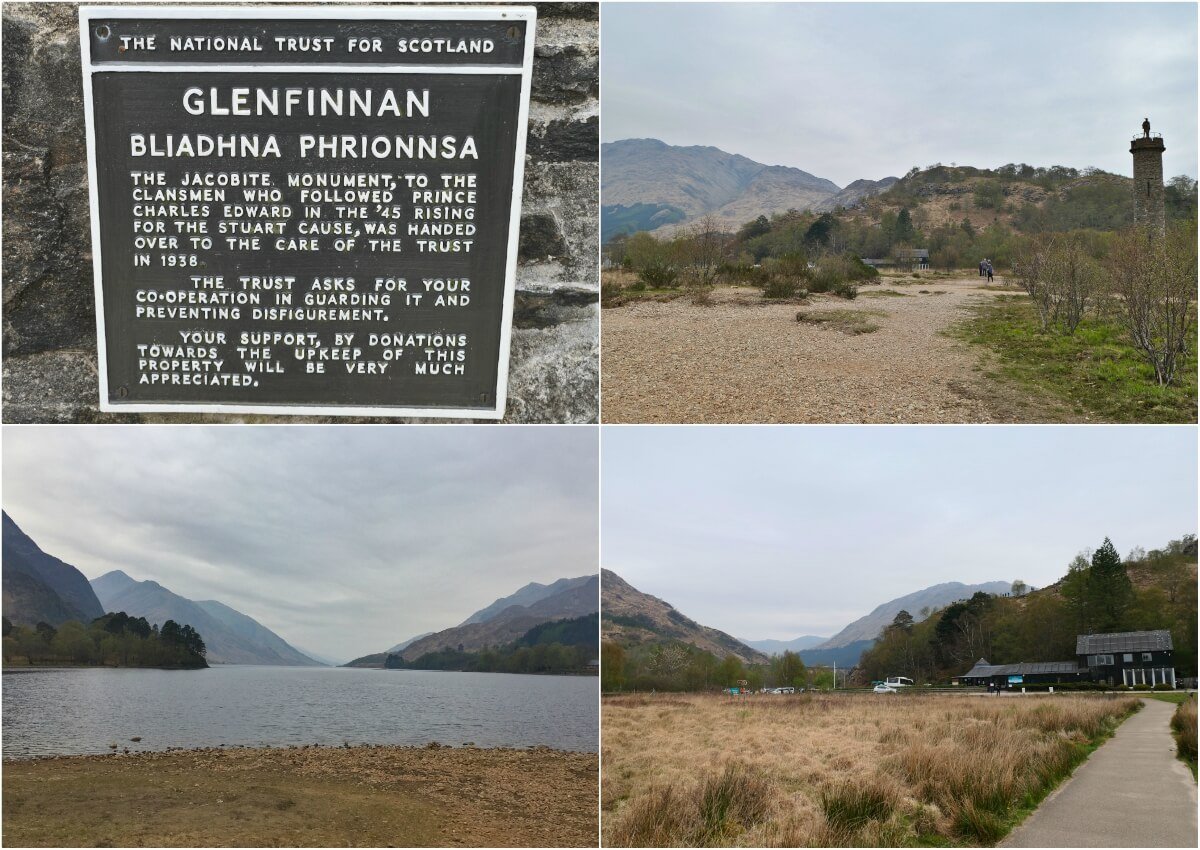 – Glenfinnan Viaduct is the famous viaduct shown in one of the Harry Potter movies and also features in some of the  £10 Scottish notes made by Bank of Scotland.
From the car park,  you make a 10 minutes walk to the top of a hill, and you will have incredible views of both the viaduct, the monument and the surrounding mountains. Unfortunately, it is not suitable for wheelchair users, as it is a steep rocky trail. 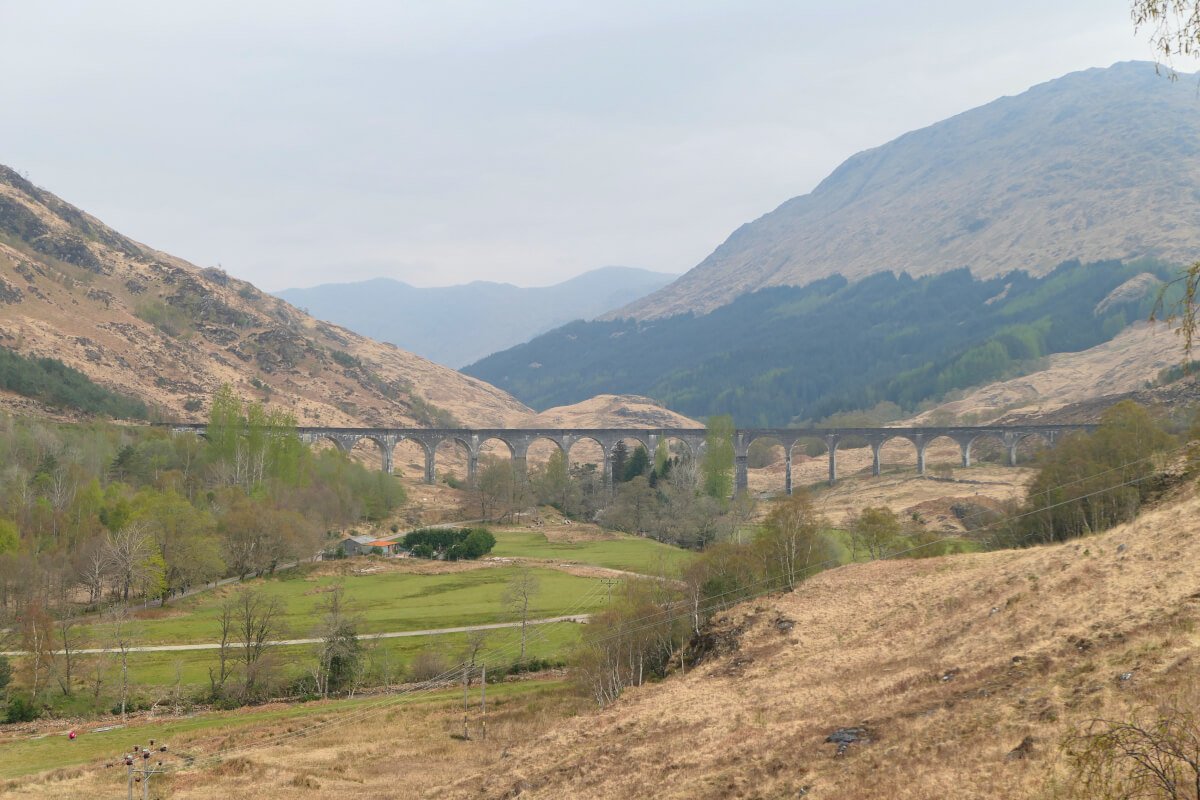 We were so lucky because the train passed by exactly when we were at the top, and it was great fun to see the “Hogwarts Express” train.
Later we discovered that the train passes at the viaduct every day at 10.55 am or 3.00 pm (at different directions). 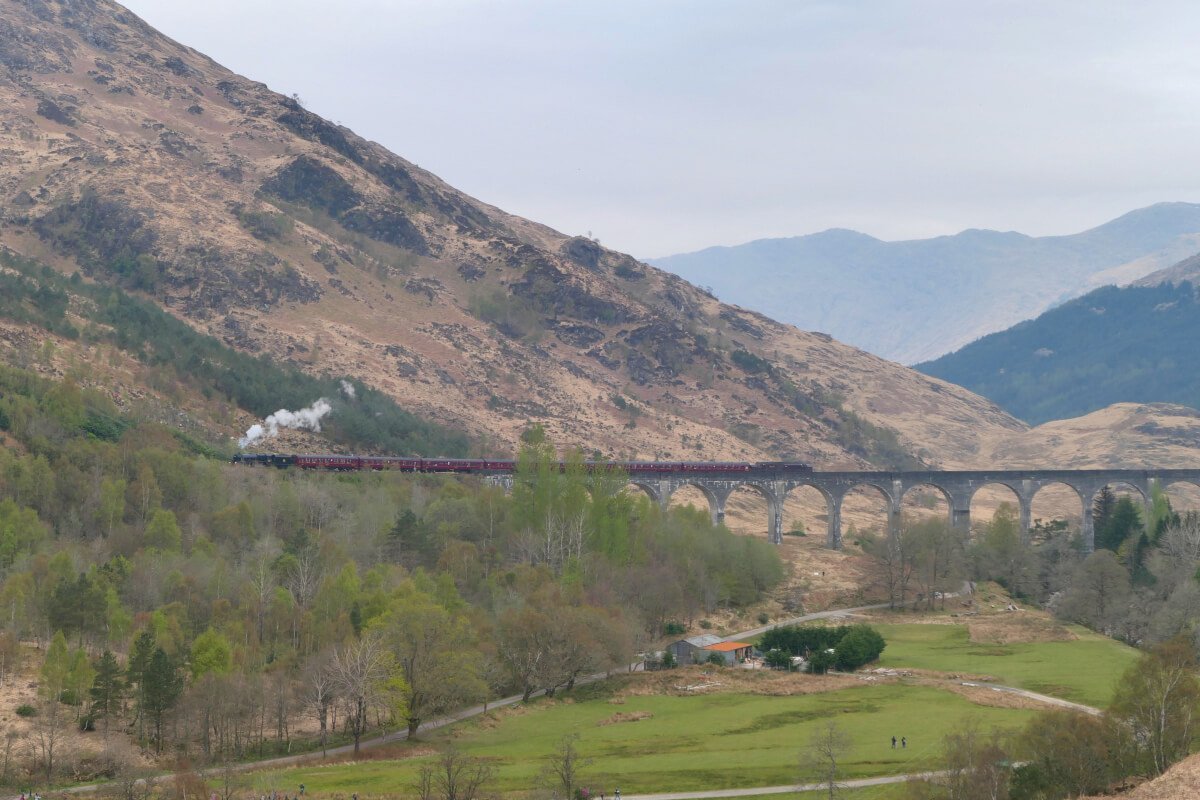 However, the train timetable changes depending on the season, therefore be sure to check it before you go. You have to be at the top of the slope roughly around 15-20 minutes after the train departs from Fort William as the trains cross the viaduct around 30 minutes after it.
You can also see the train on its way back from Mallaig, it should appear about 45 minutes before the train is due back in Fort William.
https://www.westcoastrailways.co.uk/jacobite/dates-times-prices-jacobite-steam-train.cfm 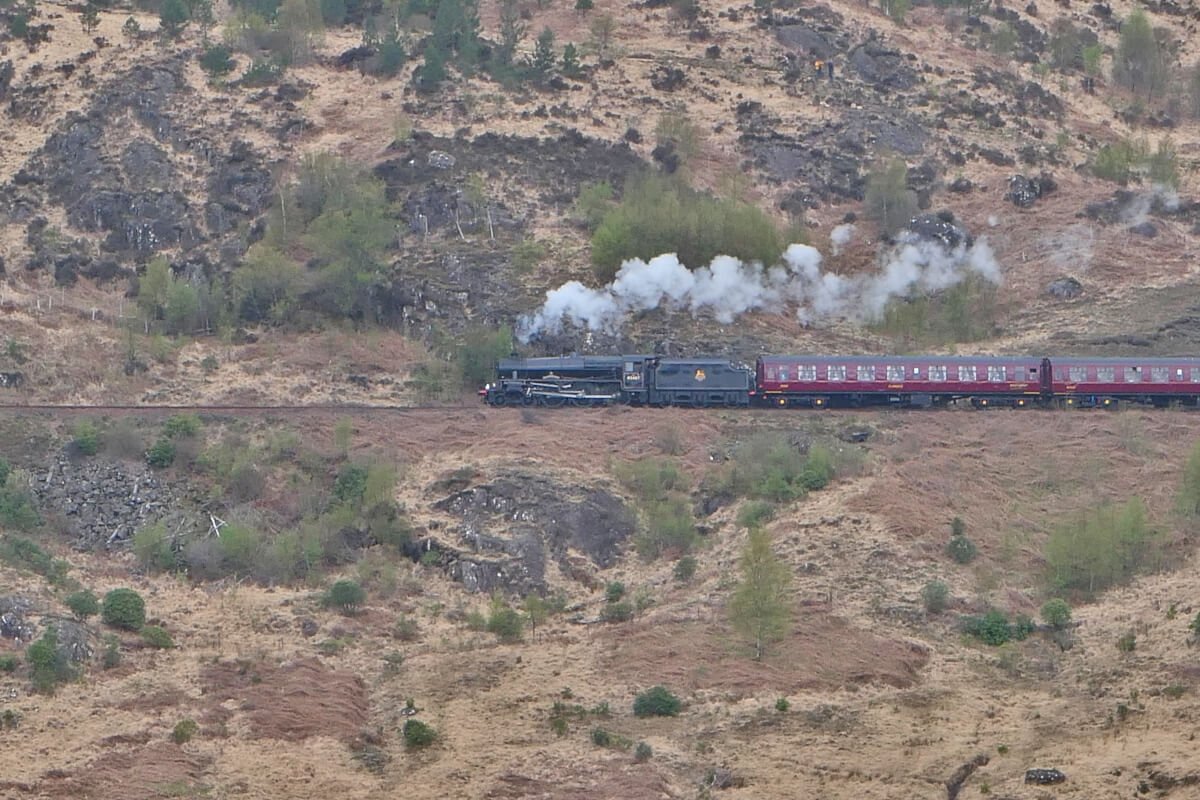 After we left Glenfinnan, we went to Fort William, which is only 17 miles (27 km) away, but we just stopped there to have lunch and didn’t see anything in the city.
The funny thing was that we discovered that there is no fort at Fort William.
It was demolished a long time ago, and there are only a few remains of it like part of the wall and its entrance archway that leads to the river and loch. 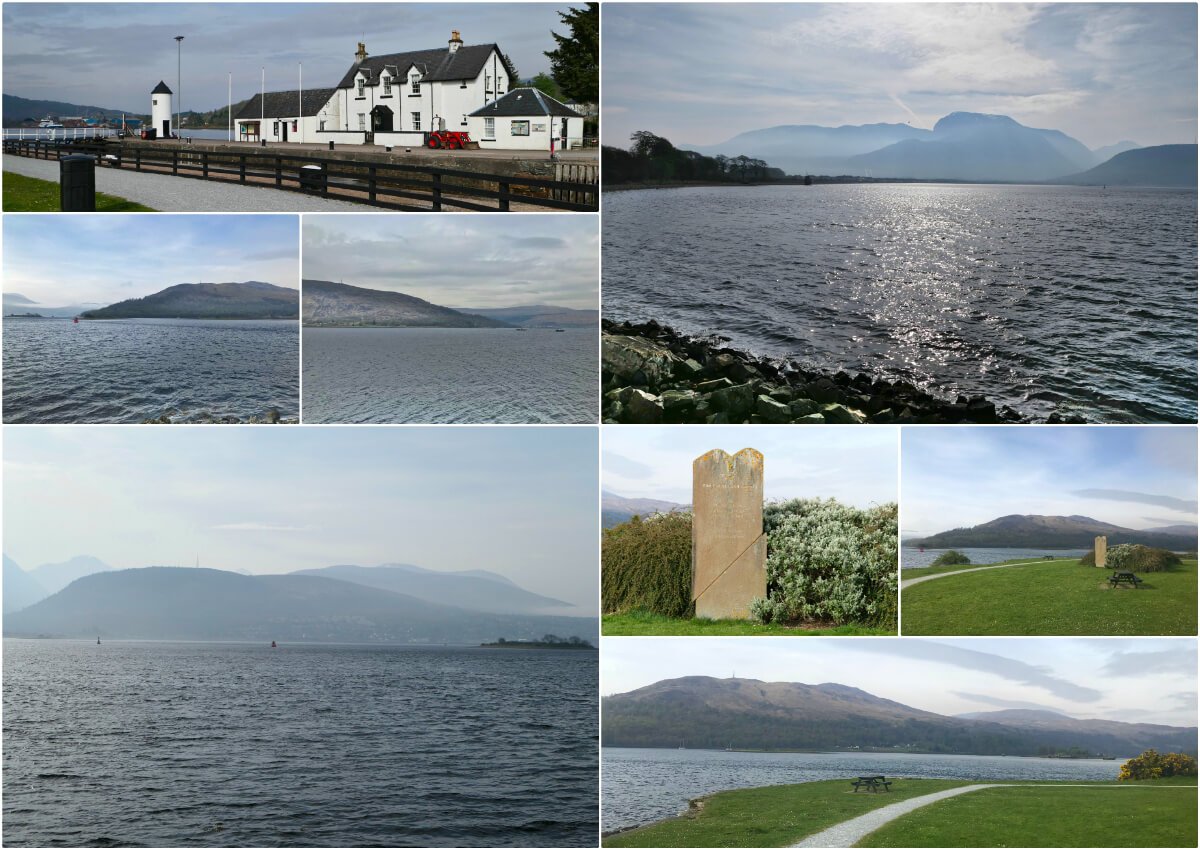 Eventually, we headed to Glencoe, where we had such a particularly lovely afternoon driving around it. Although that is for another post…

Killin and Callander Villages in Scotland

Get stunned by the scenery of Glencoe in Scotland