“Tomorrow, instead of going through Gotthard Tunel, proceed by Gotthard, Furka and Grimsel Pass. The route is spectacular, and it is only open in the Summer, as we are now!”

That is the tip that our Swiss friend suggests before we leave Verscio, his hometown in Switzerland and the best advice someone could have given us.
However, I do not recommend this route for those who suffer from car sickness, as the serpentine roads are sinuous, which goes for miles and miles.

Thus, my husband and I take the car and head to Airolo, where instead of taking the tunnel, we go through Gotthard Pass.

As soon as we ascend, we stop at the café “Chiosco Panorama San Gottardo” to enjoy the landscape. Outside the cafe, a large terrace offers one of the most breathtaking views of the Ticino Canton. Inside, in a simple and welcoming atmosphere, they serve local specialities.

We also stop to take several pictures of the Tremola San Gottardo – this old road has been kept in its original state since 1832 and is Switzerland’s largest street monument, with the old dry stone walls still in place.
The 24 hooks along in just four kilometres of cobblestones and 300 meters in altitude were part of the first carriage road through Gottardo, built between 1828 and 1832.

The Gotthard Pass usually is open between June and October and closes daily from 6:00 pm to 8:00 am. At the top of the pass (2091m), you find the National Gotthard Museum, which tells about the history and the enormous efforts to build the pass. 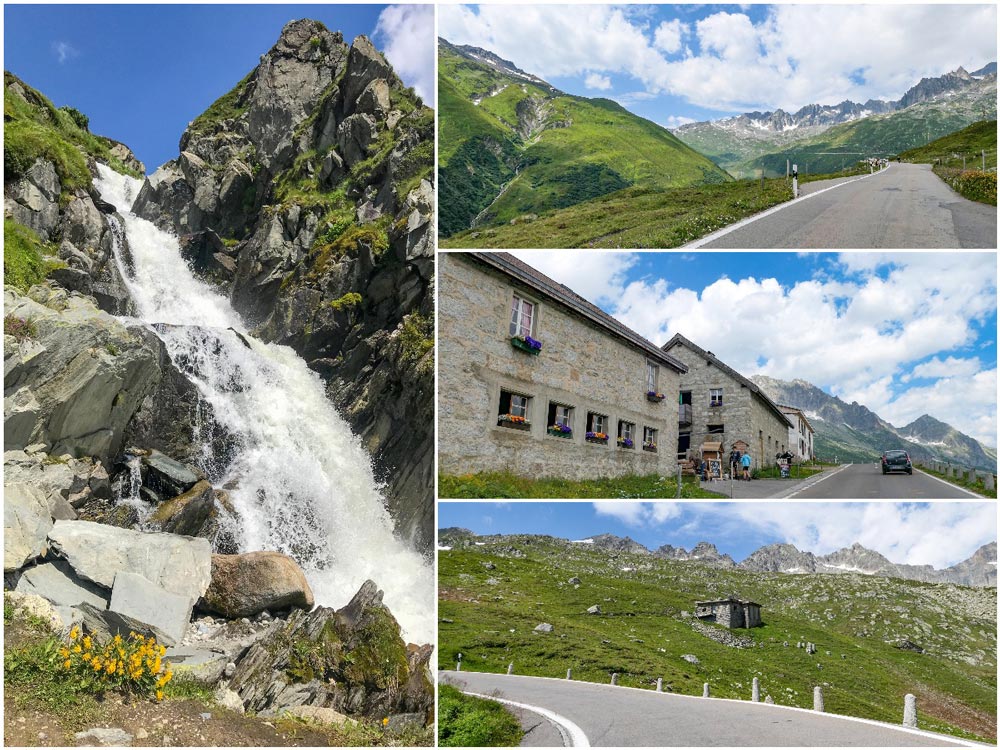 When arriving in Hospental, we head towards Furka Pass (2.429), and this is my favourite part of the whole trip: we have a beautiful view of the mountains crossing lots of waterfalls, gorges and fields filled with cows.

Why do I mention the cows? Because Swiss cows are beautiful, they have big eyelashes, they are chubby and exquisite (if you can say that about a cow!). 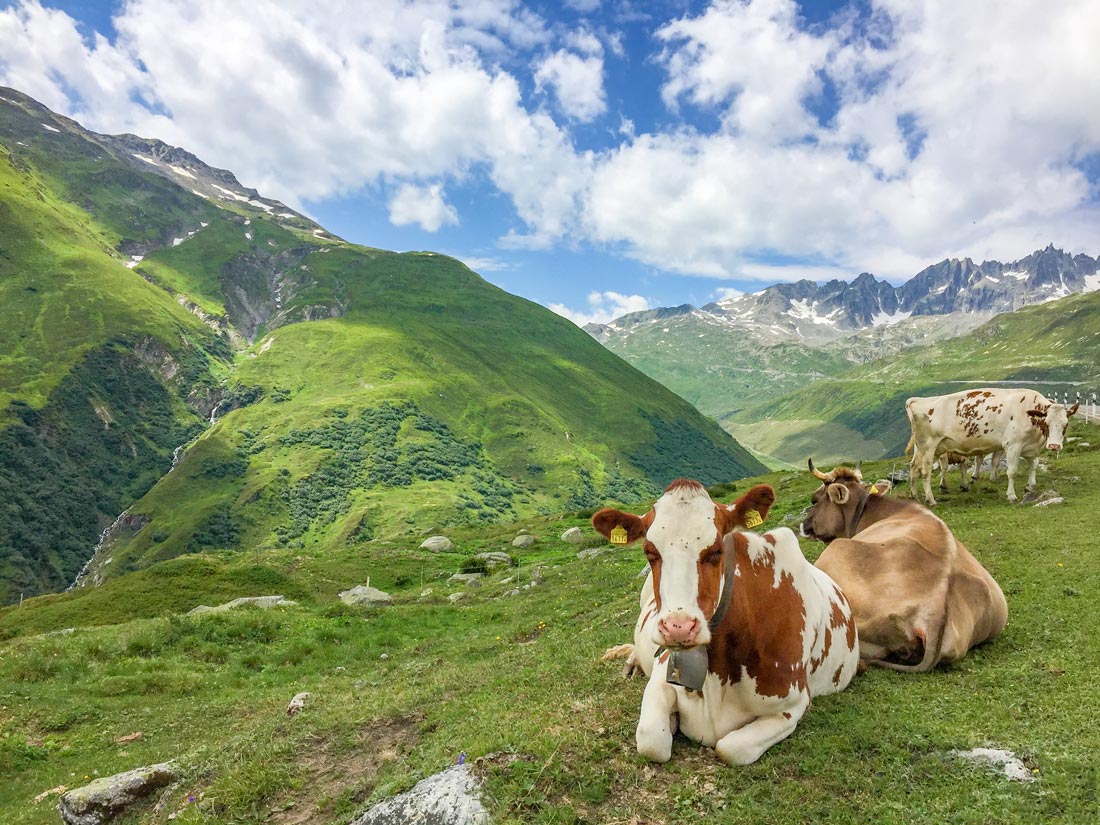 Because we decided to do this route at the last minute, I didn’t have time to research, and unfortunately, we missed the Rhone Glacier, the largest of the Urner Alps.

So we drive straight through, just taking a picture of the famous Hotel Bélvèdere – you might seem a photo before: the hotel construction on a winding curve.

After passing the hotel, we start descending again, and the landscape is even more incredible if that’s possible.

After every corner, the view is spectacular and we stop several times to take pictures from different angles. Here drivers understand why the Furka Pass, among all the beautiful Swiss passes, was chosen to shoot scenes for James Bond’s movie Goldfinger.

I spot a small town in the middle of the valley and the river that cuts the path with its bluish colour, proving the water comes from the glacier. I feel how small I am in the midst of my surroundings, yet still an integral part of the universe.

After many pictures and reflections (on my part!), we arrive at the valley and stroll around the town of Gletsch (1759m), located between Furka and Grimsel Pass.

Finally, it’s time for lunch at the “Grand Hotel Glacier du Rhône”, one of the first hotels to be built in the middle of mountains in Switzerland, in the 1830s.

Talking to the waiter, he tells us that the Passes are closed in winter, as it is hazardous to drive on the road.
What impresses me most in his story is that the entire town gets covered in snow, often with just the five-storey hotel’s roof, in eyesight.

Sitting at the restaurant’s terrace, we soon hear a noise, and a steam train slowly begins its climb up the mountain – the highest railway crossing in Europe.
The scene looks like a movie: the river, the mountains, the small church in the background and the train slowly passing by, with tourists waving at us.

Afterwards, leaving Gletsch, you can head towards Brig via Furkastrasse or, like us, follow Grimsel Pass. Just bear in mind that Grimsel Pass is only open from late May to early November. So check their website before you leave: https://www.grimselwelt.ch/en/contact/

Grimsel Pass crosses through a mountainous and sparsely cultivated region, quite different from the previous road. Zigzagging through granite walls, some tunnels, water reservoirs and a hydroelectric power plant on top, the 38km alpine pass is also one of the highest paved roads in Europe. 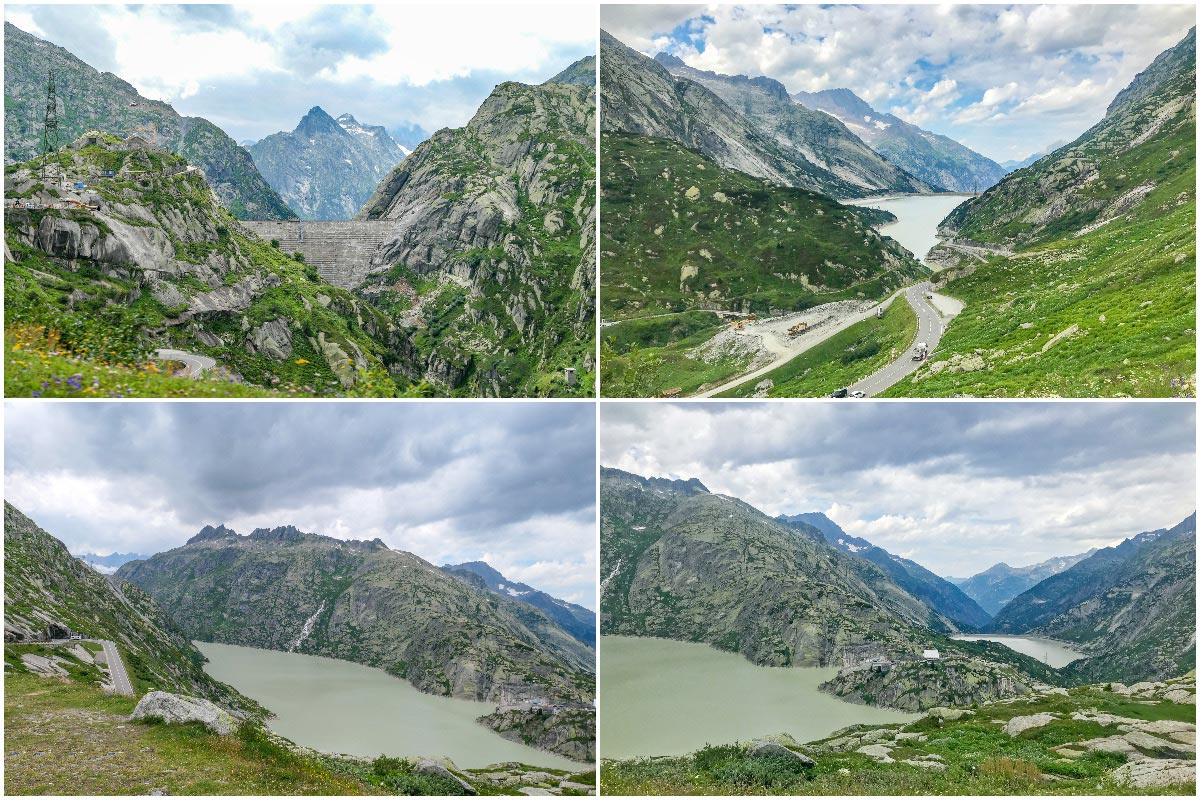 Passing by the hydroelectric, we start to descend and see the deep valley with small villages, and whenever you want, there is enough space to park safely by the side of the road. Perfect for taking some pictures.

From there on, we stop in Guttannen for coffee and head to our final destination, the charming village of Kandersteg (read more here) where the stunning Oeschinensee and Blausee lake are located.

So how can I not love this country? Everywhere I go, is stunning…

Have you heard about Lake Caumasee in Switzerland?