Home » The lovely town of Dinant in Belgium

The lovely town of Dinant in Belgium

Years ago, I saw a photo of a small town in Belgium called Dinant, and of course, with my desire to see the world, I put it on my bucket list.

As I was going from London to Switzerland by car, I chose Dinant to split our trip, spend the night, and get to know this place so cute and “still” little known by tourists on duty. 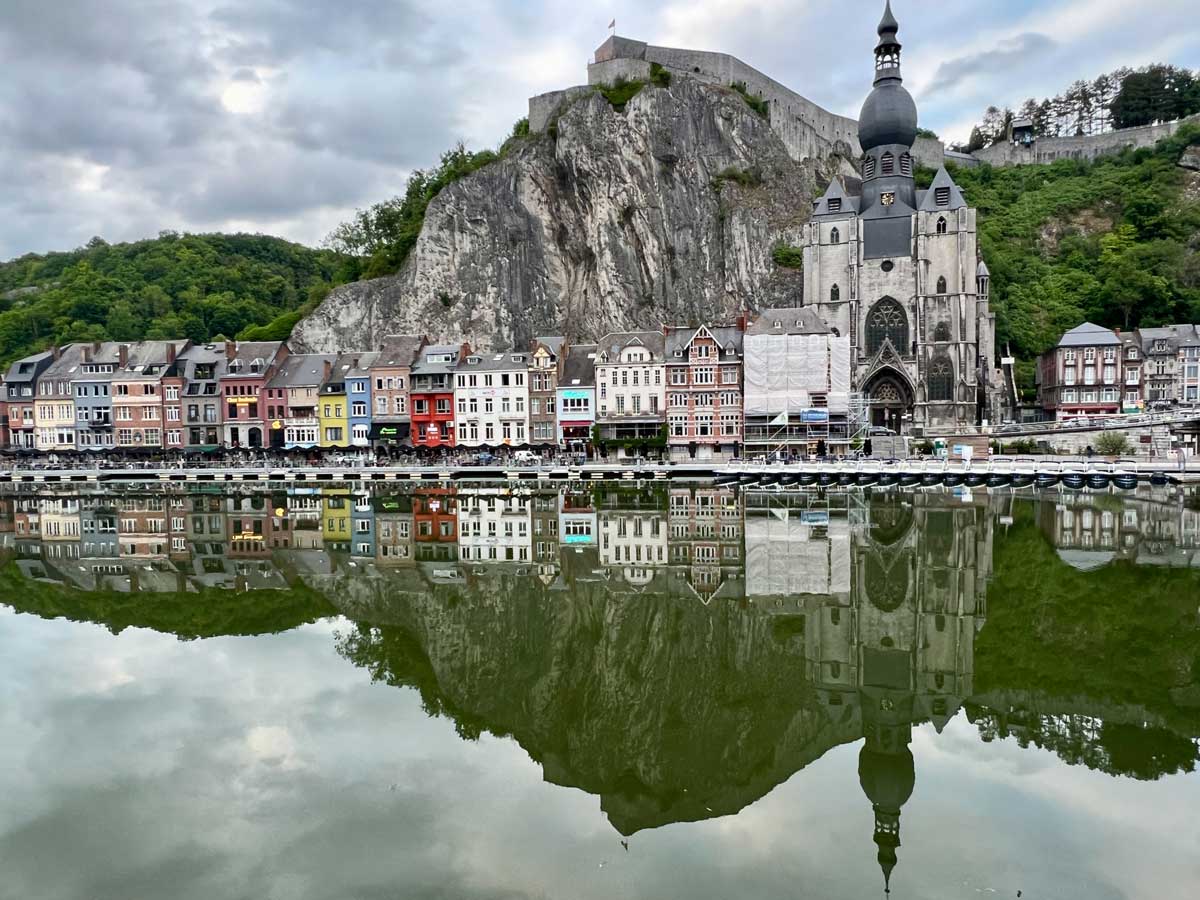 Dinant is about 90 km from Brussels and can easily be done on a day trip as it is tiny and you can get to know it in a few hours. Several trains during the day leave from Brussels; from what I saw, they are pretty cheap (see tickets here – in English).

Nestled between the River Meuse and the rock walls that rise to the medieval fortress hints at the city’s great star, the Gothic church of Collegiate Notre Dame.

The church has one of the largest stained glass windows in Europe, representing the history of Christ’s salvation and was one of the most impressive interior churches I have ever visited. 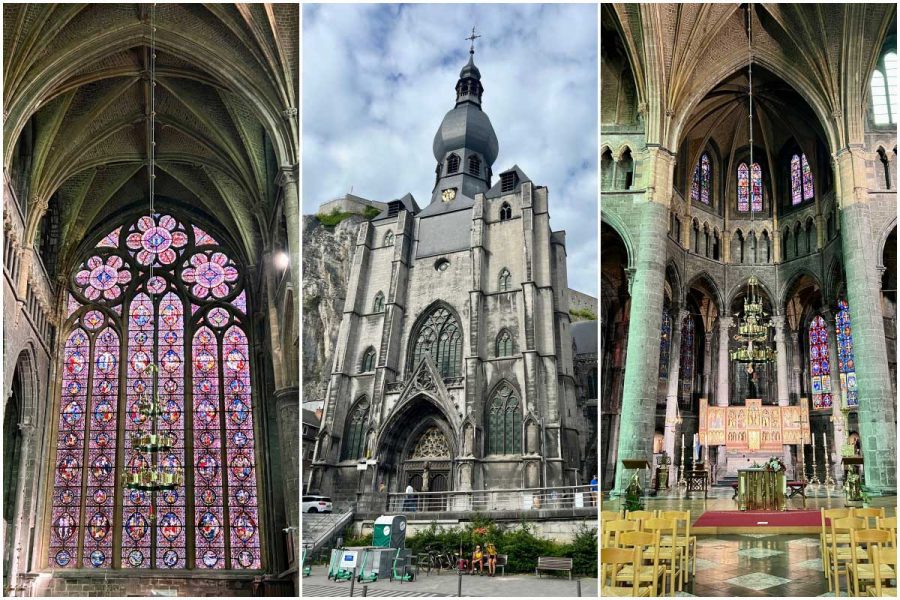 It was here in Dinant, in 1840, that Adolphe Sax, the saxophone inventor, was born and is today the pride of the city. His period home has also been completely transformed into a public museum, the Maison de Monsieur Sax.

In addition, saxophones are scattered throughout the city. Be sure to cross Le Pont Charles de Gaulle with several saxophones in the colours of Europe. 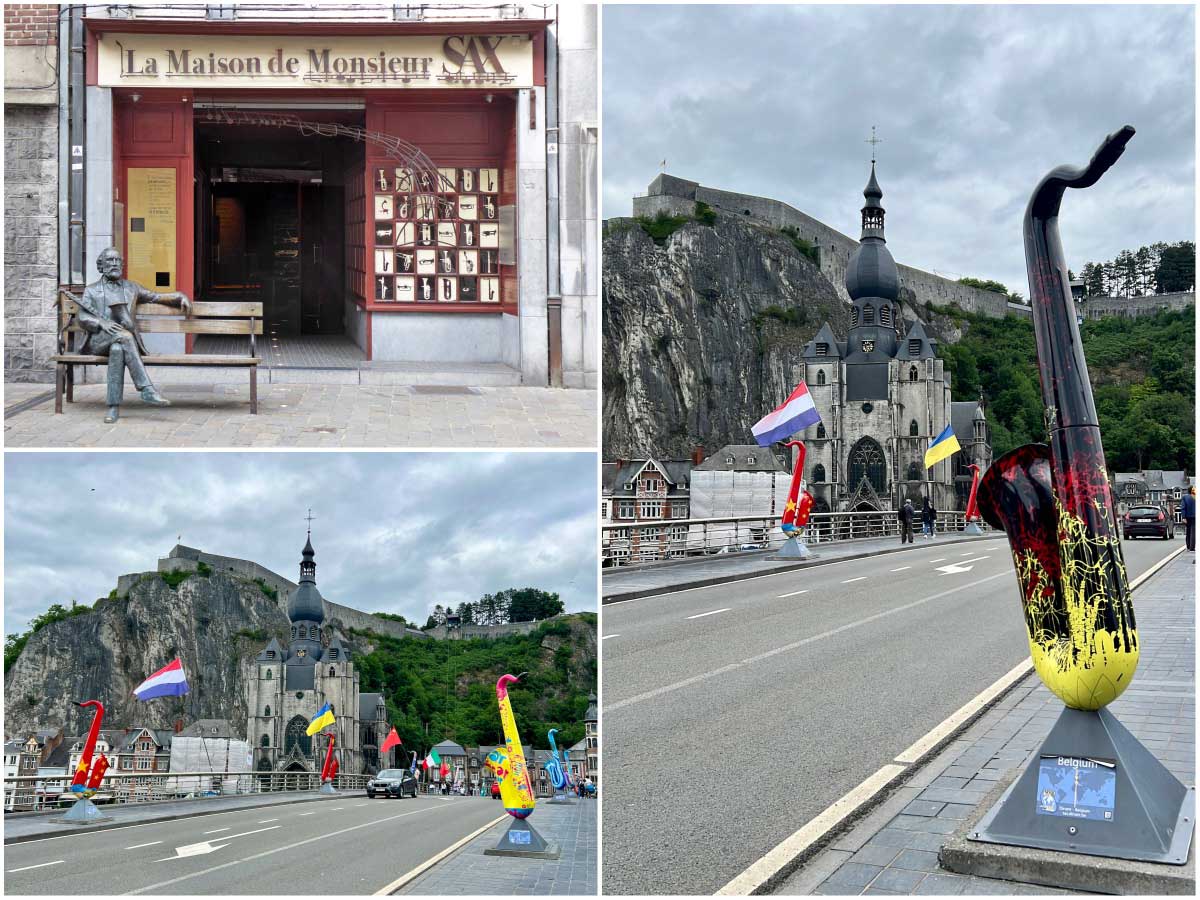 The bridge is named ‘Charles De Gaulle’ to commemorate the presence of the former President of the French Republic, Charles de Gaulle, when he was shot in the leg during the great battle at Dinant in August 1914. 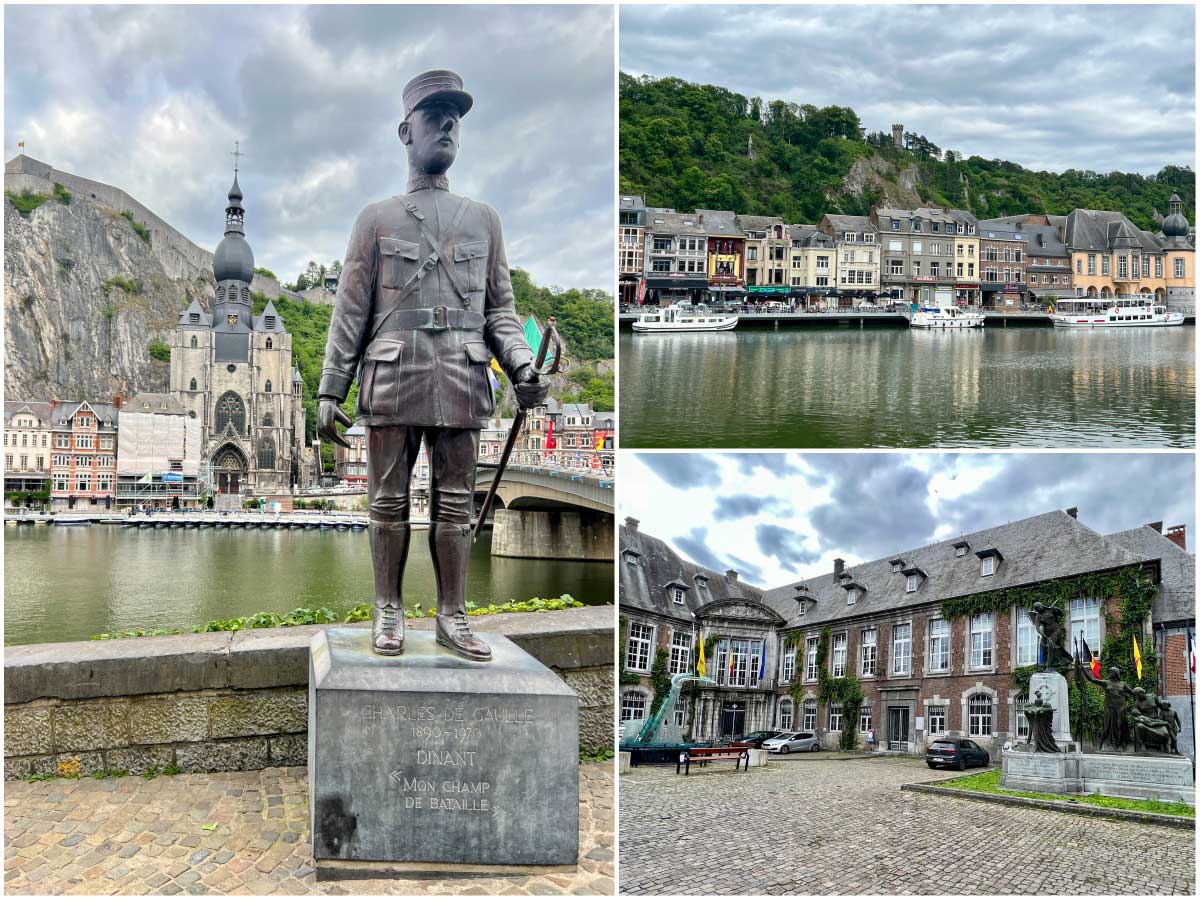 Unfortunately, when I arrived, the Citadelle de Dinant – a fortress on the top of the hill – was already closing and as I had to leave before it opened the following day, I couldn’t visit it.

But the entrance is right at the back of the Church, where you can choose whether you want to take the cable car or face the 408 steps.

There in the Citadelle, not only does it have a Museum of Arms, but also an excellent view of the city, the river…

Dinant is also famous for its “Dinant couques”, which are “carved” honey-based cookies.

And for the lovers of a good beer, Dinant is home to the famous Abbaye de Leffe and the brewery museum Maison Leffe, which tells the story of one of the best-known Belgian Trappist beers in the world.
For the brewery tour, you can buy the ticket in advance through the link here or on-site.

– the various boat trips that depart from Dinant and travel through the Haute-Meuse region. Please choose one of them and enjoy the beautiful landscape.

– the Grotte de Dinant La Merveilleuse is a cave with 850 meters of galleries, 650 of which are accessible to visitors. The cave houses numerous stalactites, stalagmites, calcite waterfalls and an underground river.

– the Castle of Freÿr: 6km from the centre of Dinant, a mini version of Versailles in France, this castle is one of the most compelling in Belgium. It has been classified as one of Wallonia’s top heritage sites. 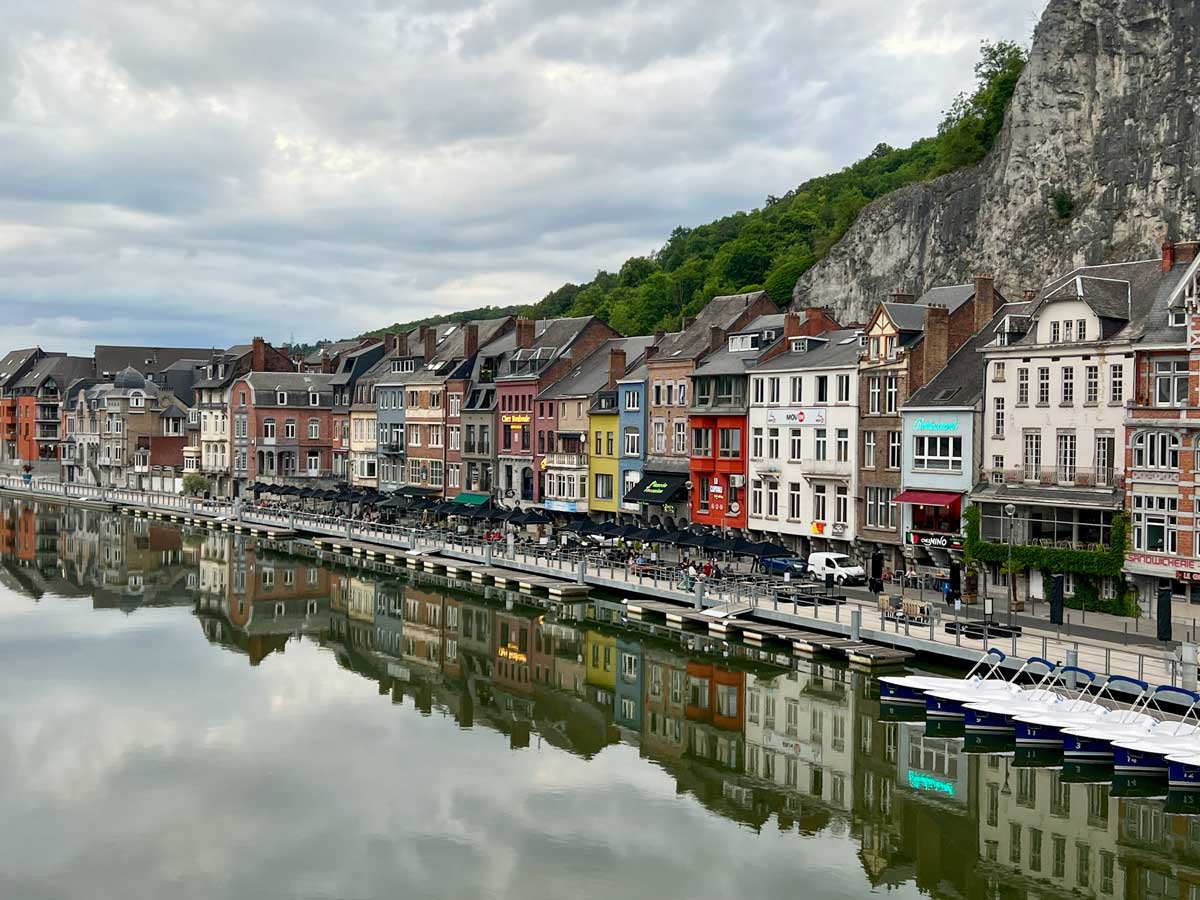 How to get to Dinant?

By train
From Namur or Brussels, you can easily reach Dinant in just 1.5 hours, and the stop is conveniently located across the river, just a 5-minute walk from the city centre.

By car
As the town is quite small, you can follow the GPS or, if you want an address, you can put Rue de la Station 4, 5500 Dinant, which will take you right to the Charles De Gaulle Bridge. 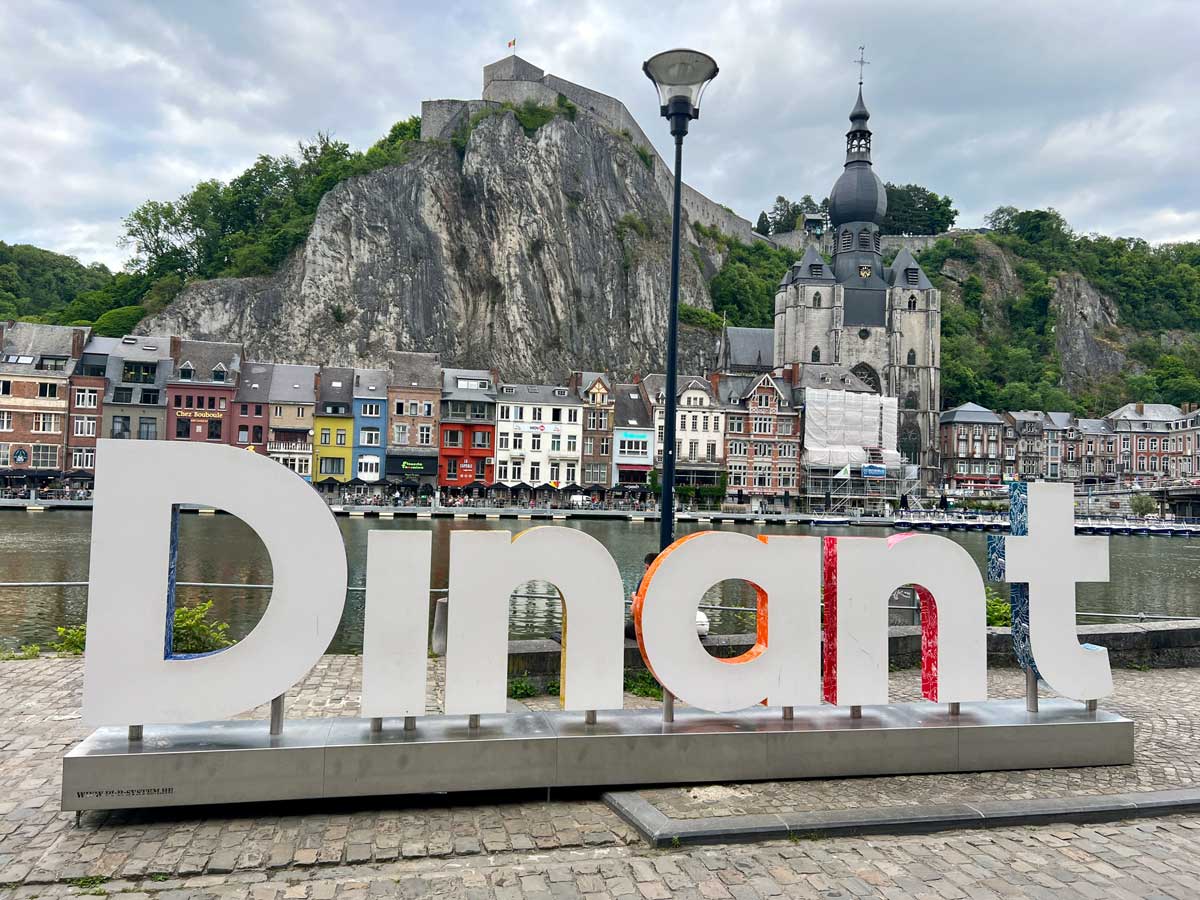 Another “attraction” is simply sitting in one of the many restaurants by the river and tasting an excellent Belgian beer while enjoying the beautiful scenery and boats floating on the river.

The cute Bruges in Belgium