Home » Corralejo and the North of Fuerteventura in the Canary Islands, Spain

Corralejo and the North of Fuerteventura in the Canary Islands, Spain

As I mentioned in my previous post here, when we went to the Canary Islands in Spain, we stayed in the North of Fuerteventura, more precisely in a town called Corralejo.

Corralejo is one of the main cities and one of the most sought after destinations on the island, as it has many hotels and resorts, a wide variety of bars and restaurants, several beaches and the famous dunes of the Corralejo Natural Park.

The Natural Park is five kilometres from Corralejo and has more than 10 km of dunes, with white sand and a wonderful turquoise sea. 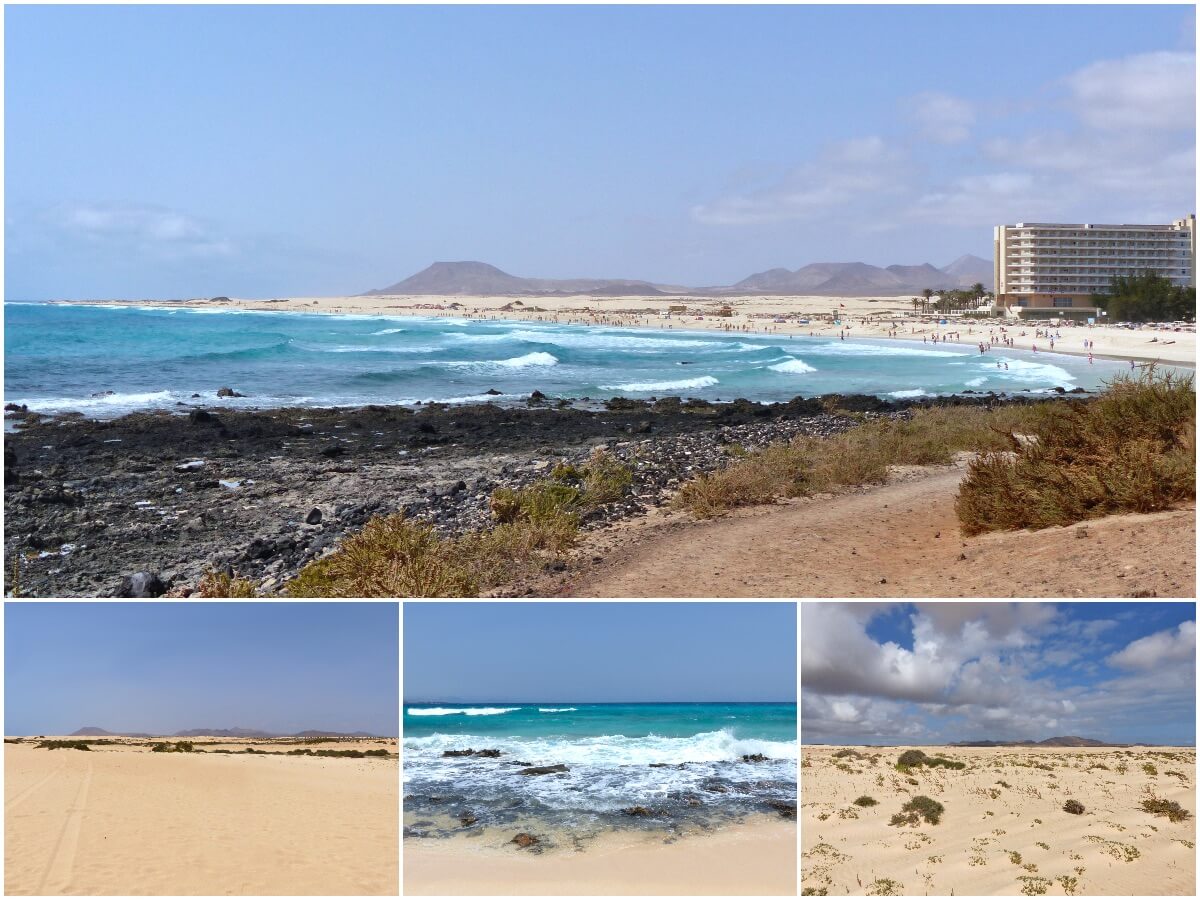 Corralejo Park is protected, and no one can build on or near it (although the Riu hotel chain managed to construct its hotels before the regulation was in effect).

We chose Corralejo, to stay in this hotel and thus be able to enjoy its beautiful dunes, that beautiful shoreline and the Great Playas de Corralejo, which is a series of paradisiacal beaches located one after the other.

The beaches that form the Corralejo Grandes Playas are towards the south, after the city of Corralejo from the Hotel Tres Islas to the beach of Barreta de Abajo and are great for families, as well as for nudists and for practising water sports, such as kitesurf and windsurf. 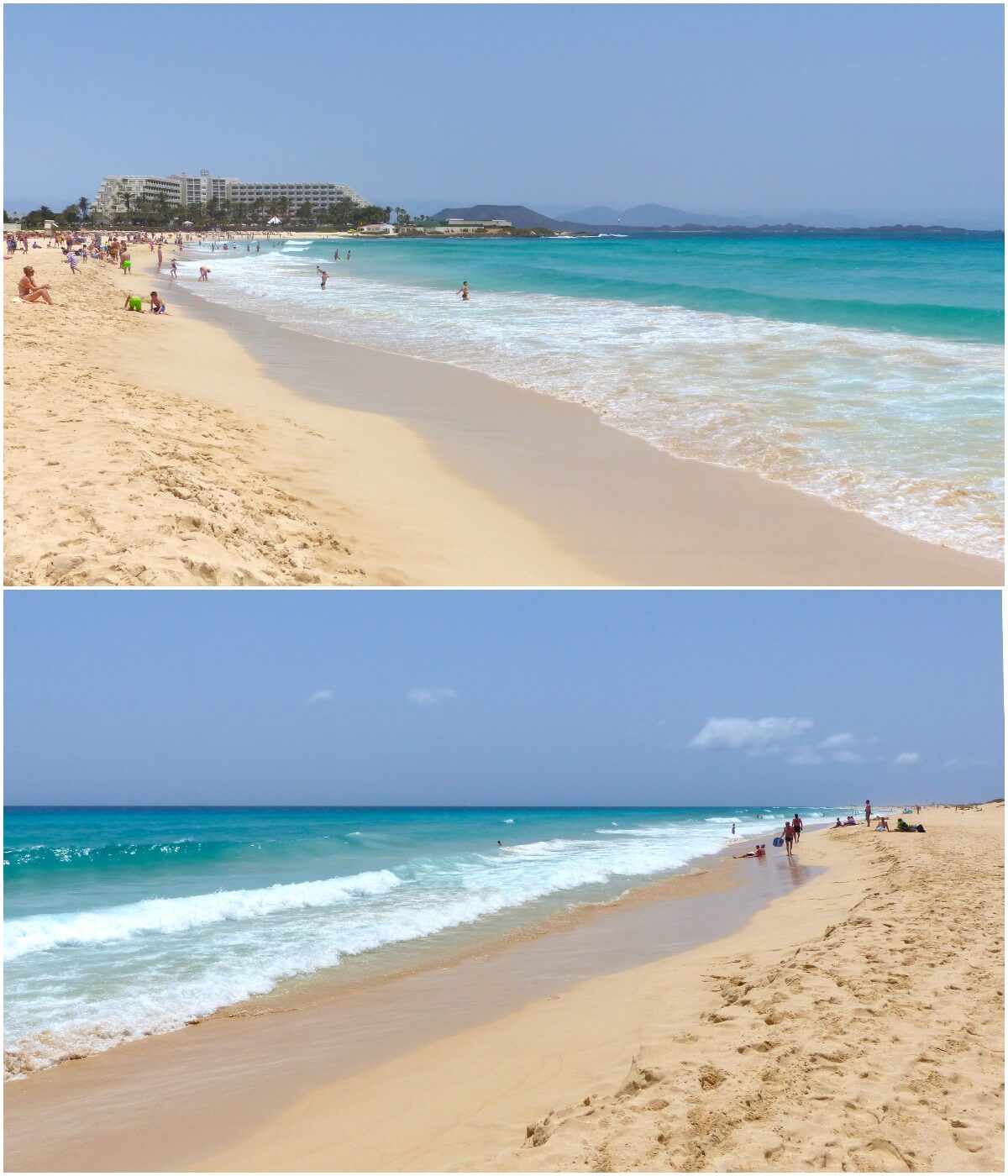 Several beaches are found on this stretch and also in the north of Corralejo, such as:

Muelle Chico – is in the city and is one of the busiest beaches in the area. There is always music playing and something going on. It is 90m long and has very fine white sand. The beach attracts many young visitors as it has several bars next to each other.

Flag Beach or Bajo Negro – is in front of the Riu hotels and has more infrastructure, such as renting sunbeds and umbrellas. It is trendy for windsurfing and kite surfing. 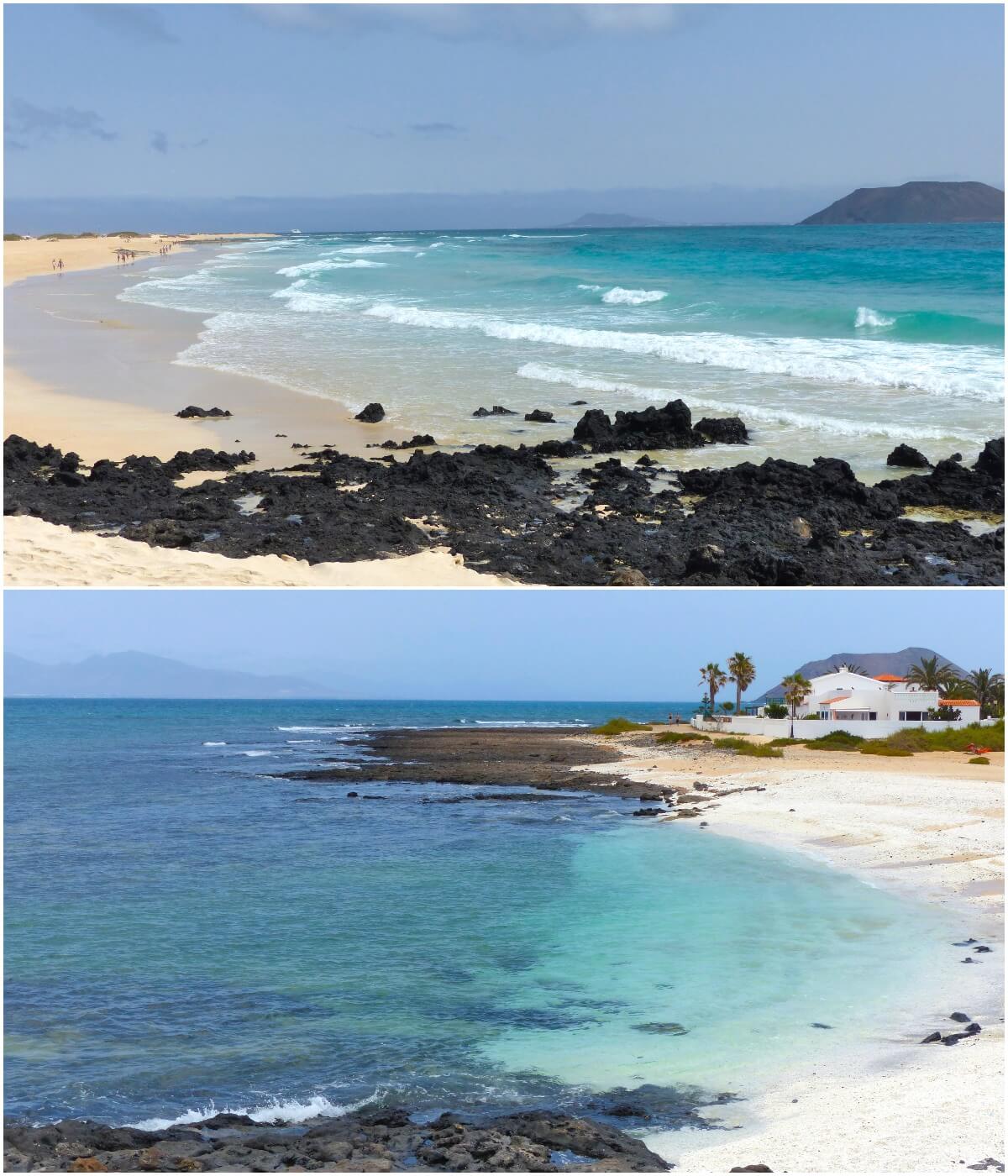 Playa Del Moro, also known as El Burro or Glassbeach famous for kite, windsurf and surf. There are no tourist facilities, nor is there a surf school or equipment rental, so you must bring your own or rent it at Flag Beach.

Playa de Los Matos or El Charcon – to get there, you have to cross the dunes or walk passing by the other beaches. There is no infrastructure like toilets, bars or sunbeds rental.

There is several others beaches in the area, such as Playa Larga (nudist), El Viejo, El Pozo, El Caserón, etc.

In the city centre, most of the options for shops, bars and restaurants are located on the main street, called Av. Ntra. Mrs. del Carmen or in the old town, near the port.

Corralejo’s old town is centred around the old port, which is still used by local fishermen.
There is also a newer marina, where you can catch a boat to explore the rest of the island and even the ferry to Lanzarote and Los Lobos.

It is a small and calm beach, away from the tourist bustle and most visited by the locals. It is a beach of sand and stones, with calm waves and ideal for diving.

It is better known by the name Popcorn Beach and has been a cause for concern because tourists are taking their stones, which look like popcorn, as a souvenir and thus spoiling the beach.

So much that the “Consejería de Medio Ambiente del Cabildo” has picked up the stones at the airport’s security control and can thus return them to the beach.

It consists mainly of pieces of white fossilized limestone algae that accumulate around a small rock or grain of sand and that look very much like popcorn – hence the name.

El Cotillo is a small fishing village, and its beaches are considered one of the best on the island.

There is a beach for every type of taste: if you like quiet or busy beaches or perhaps small or large beaches, here you will find one most suited to you.

The beaches on the south of El Cotillo have plenty of waves, which make them ideal for surfing. From the overlapping cliffs on the outskirts of El Cotillo, you can admire Playa Grande, where miles of white sand and pristine nature form a fantastic landscape. 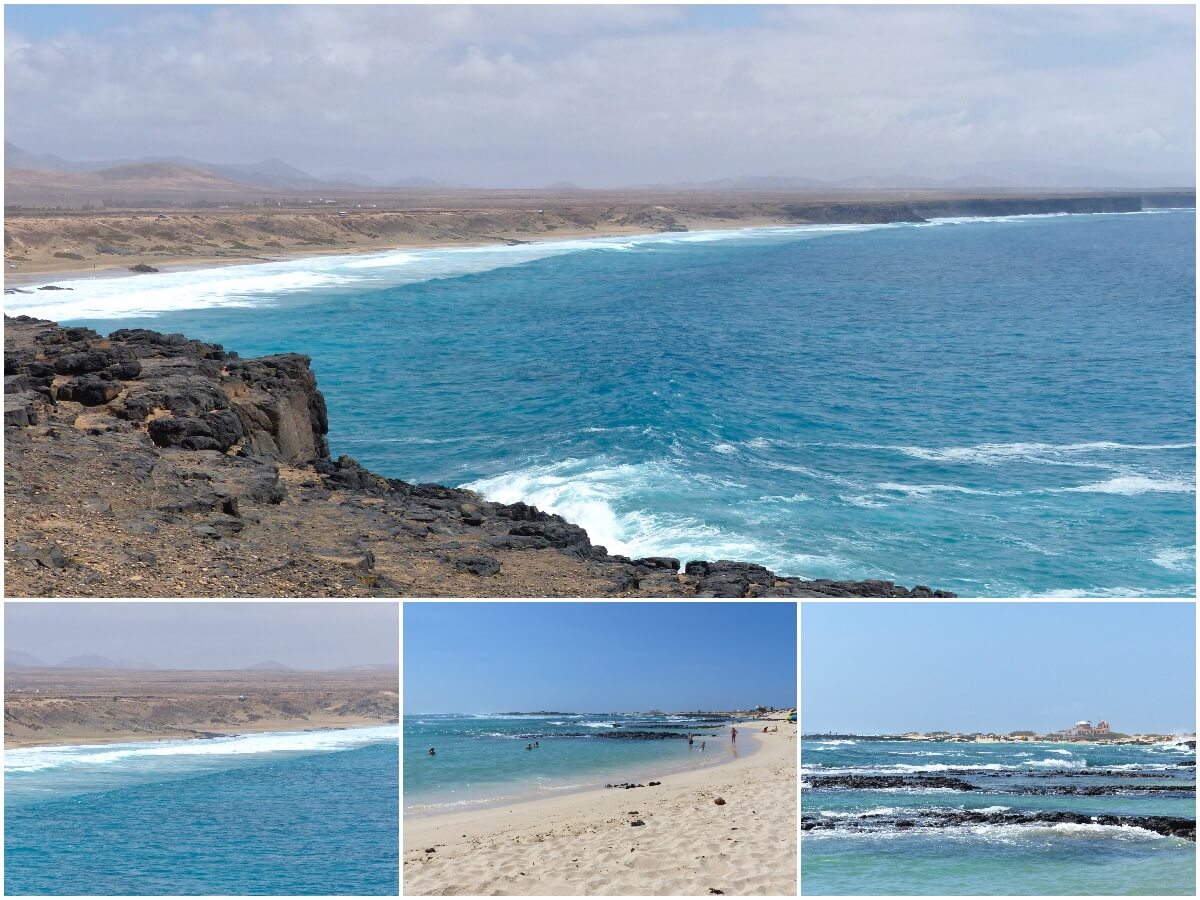 To the north of the town, there are several beaches with calm and crystal clear waters, perfect for relaxing and snorkelling. These beaches are small lagoons protected from the waves, ideal for diving and swimming.

Among the most famous, is Playa de la Concha, which is close to the lighthouse (do not get confused with the beach of the same name, which is on the island Los Lobos).

La Concha is a small bay with soft sand and is protected from waves by rocky reefs, making it perfect for swimming and diving.
At high spring tide, a shallow lagoon forms just behind the beach, ideal for young children to play.
Because it is easily accessible and has a large parking lot, in addition to having a bar on the beach, it is hectic in high season. 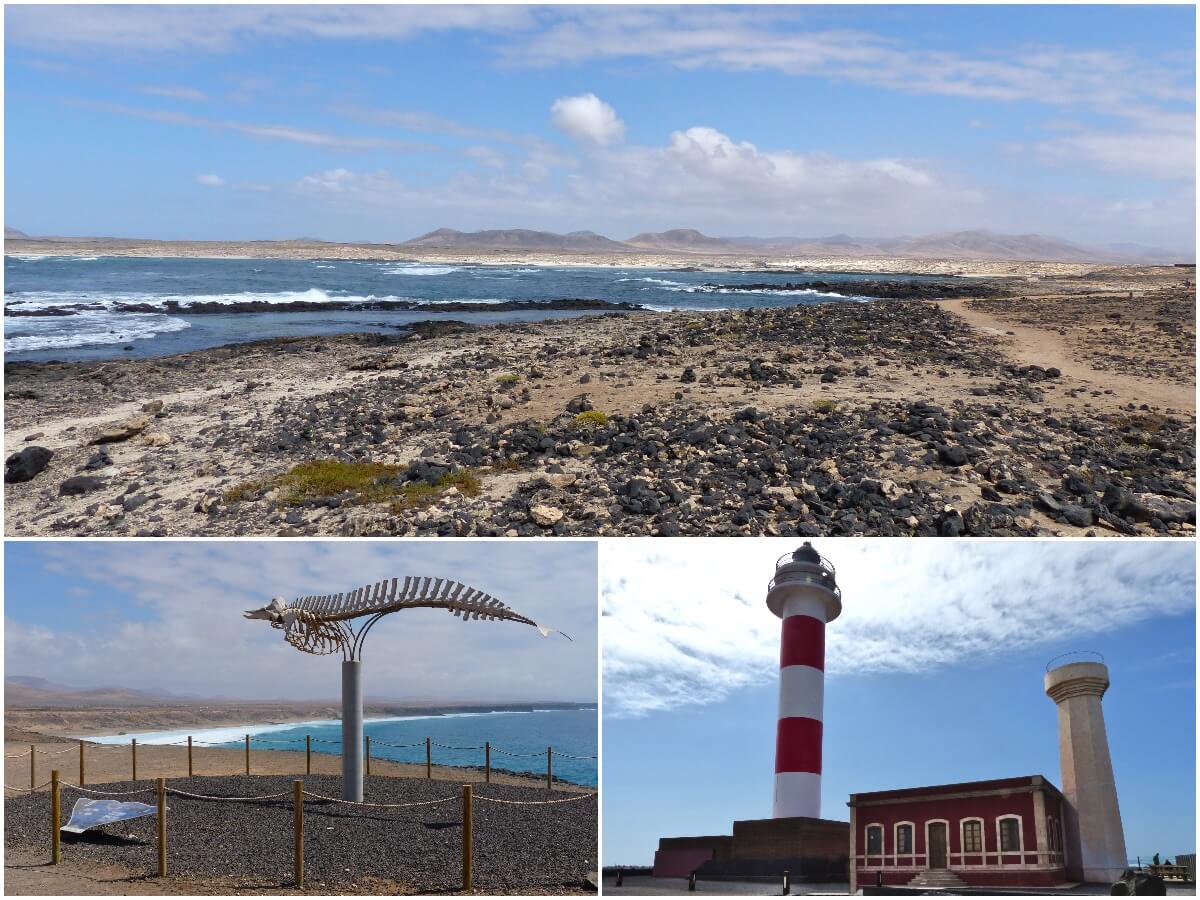 Be sure to visit Faro de Tostón or El Cotillo Lighthouse. Inside the lighthouse is the Museum of Traditional Fishing, which brings together customs and traditions of fishermen.
Also, it has a demonstration of the sustainable exploitation of natural resources.

It is a nature reserve tiny island, that measures about 4.58 km2, being great for a day trip.

To get there, take a boat from the port of Corralejo, and the trip is only 15 minutes. Tickets cost around 16€ roundtrips and can be purchased directly at the port and or on this website here: https://navieranortour.com/en/ferry/ferry-lobos-island-express-fuerteventura/

The suggestion is to leave early in the morning and return in the afternoon, to allow time to explore the old lighthouse, as well as the paradisiacal beaches.
Or if you want more adventure, you can hike to the top of the Caldera de la Montana, which is an inactive volcano (127m). The top offers spectacular views.

Access is limited in some restricted areas, to protect the natural landscape from human impact, and there are some marked hiking trails to preserve conservation areas.

I honestly can’t remember why we didn’t visit Los Lobos. It’s a shame!

As you can see, the North of Fuerteventura is magnificent and a must-see while in the island.
Have a lovely day! 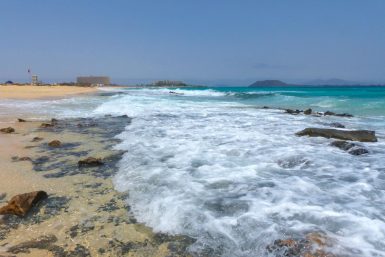 The beautiful island of Fuerteventura in the Canary Islands, Spain 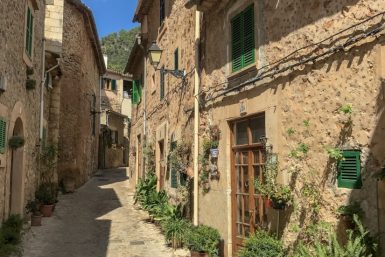 What to see in West Majorca, Spain? 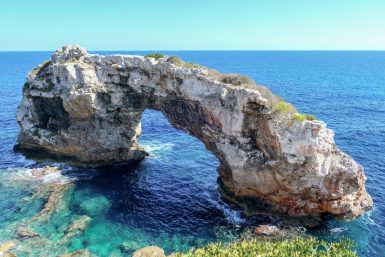