If you are in Nice for a few days I suggest you to set aside sometime to do a day trip in the surrounding cities, such as Cannes, Marseille, Saint-Tropez, Antibes, Menton, Saint-Paul de Vence, Èze , Saint-Jean-Cap-Ferrat, Beaulieu-sur-Mer, Villefranche-sur-Mer, Cagnes-sur-Mer, Peillon, Peille, Aix-en-Provence, Toulon, Grasse, Verdon Gorge and several others.

Choose the one you like best and try to visit. I’m sure you won’t regret it!

Usually, people fancy to visit Monaco because it is only 12 miles (20km) from Nice and is easy to reach by bus, train, car or bicycle (more about Monaco here).

But my opinion to make this stretch is to drive through one of the Corniches (cliff roads): La Grande Corniche at the top, the Moyenne Corniche in the middle or the Corniche Inférieure (or Basse Corniche) by the coast. 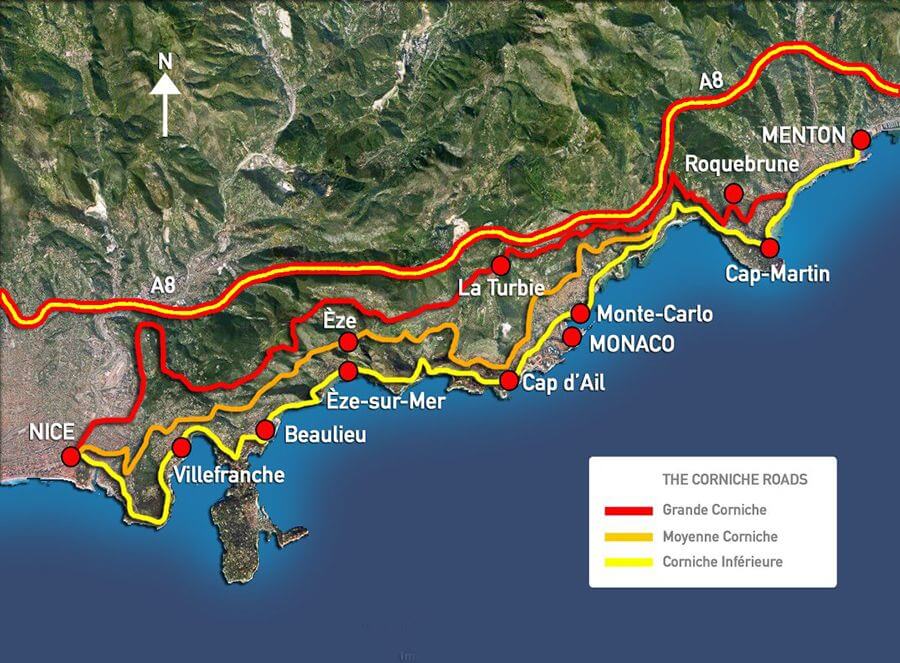 The Corniches are a coastal drive that runs from Nice to Menton in Italy and passes through several beautiful towns and offers a breathtaking view when you arrive in Monaco.

The landscape is so impressive that it has appeared in a few famous movies, such as “How to Catch a Thief”, directed by Alfred Hitchcock and starred by Grace Kelly, some James Bond movies and many advertisements and TV car shows, etc.

As we had only two days to spare, we spent one day in Villefranche-sur-Mer and Èze Beach, the next day we went to the wonderful village of Èze and the beach of Cap-Ferrat, and after that, on the next day we headed to Monaco, where we stayed for two days. 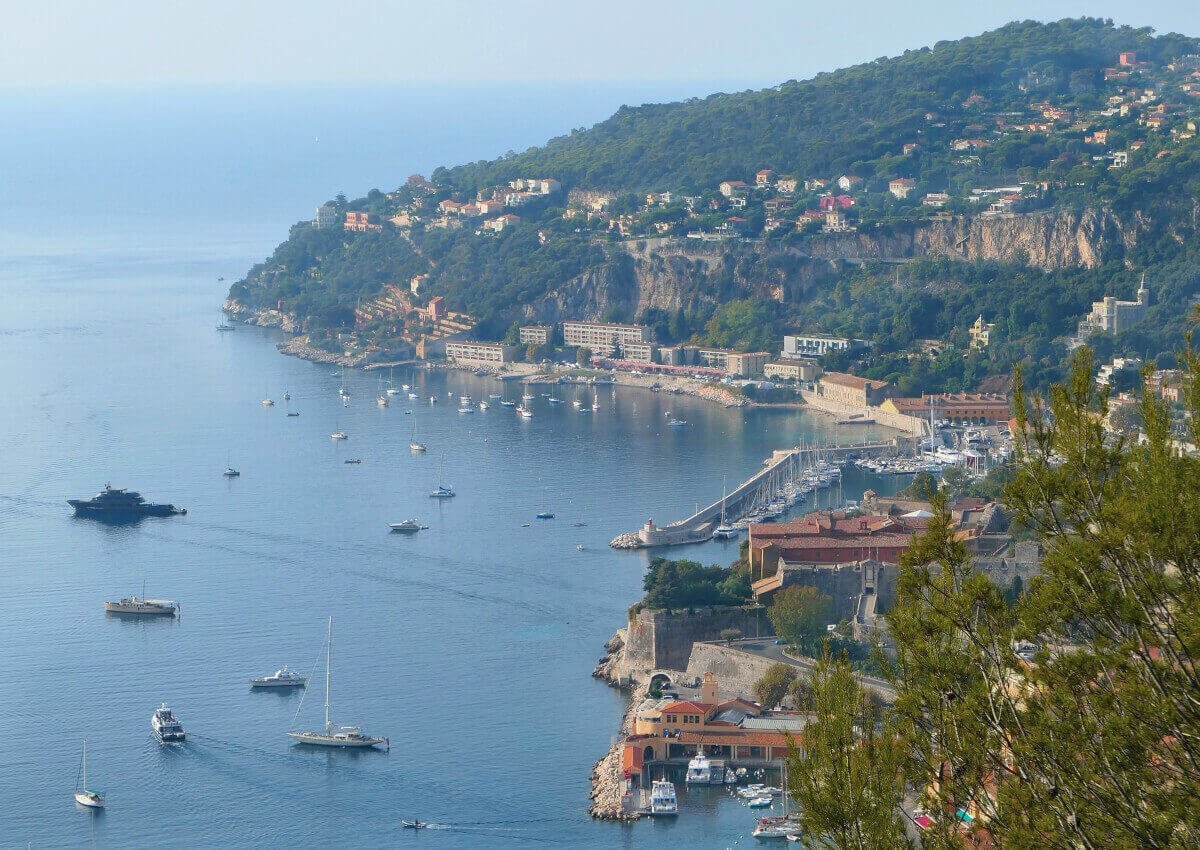 To go to Villefranche, we took the train in Nice, and I admit that it was a little unpleasant experience.
First of all, I found the central station a little chaotic and without any signs.
It took us a while until we found where to buy the tickets which had a massive queue and it took us more than 30 minutes just to buy the train ticket.

The train was also packed and had practically no room, even standing.
As it takes less than 10 minutes to reach the village, that was fine, after all, we’re on holiday.
But a local resident told us that the train which goes to Monaco/Italy is always packet at any time or day, and those who can try to avoid it, I would recommend to do so.

After Villefranche, we took the train to the beach of Èze, and we stayed there for a while.
But then we wanted to go to Beaulieu-sur-Mer before returning to Nice although it was just impossible.

We tried to catch two trains, but they were so crowded that it was literally impossible to get in (I should have taken a picture to show you).

We spent more than an hour trying to get on the train or waiting for the bus. In the end, we were already annoyed because it was late afternoon, and we lost that precious time of sunshine (those who live in the UK know what I mean).

After waiting for so long, we took any bus towards Nice Central Station and gave up on going to Beaulieu-sur-Mer, which is a shame, as I heard that it is beautiful there.

Then, the next day we decided to rent a car and went to Èze Village and then Saint-Jean-Cap-Ferrat. It was way better and without wasting time.

Now, without further ado, I’m going to talk a little bit about each of those lovely towns I visited.

It is the first stop on the way from Nice to Monaco and is well worth a visit.
The village is so beautiful that several films have been made there, including part of the Riviera series.

It has a gorgeous beach, with pebbles and sand, with beautiful and transparent turquoise colour. 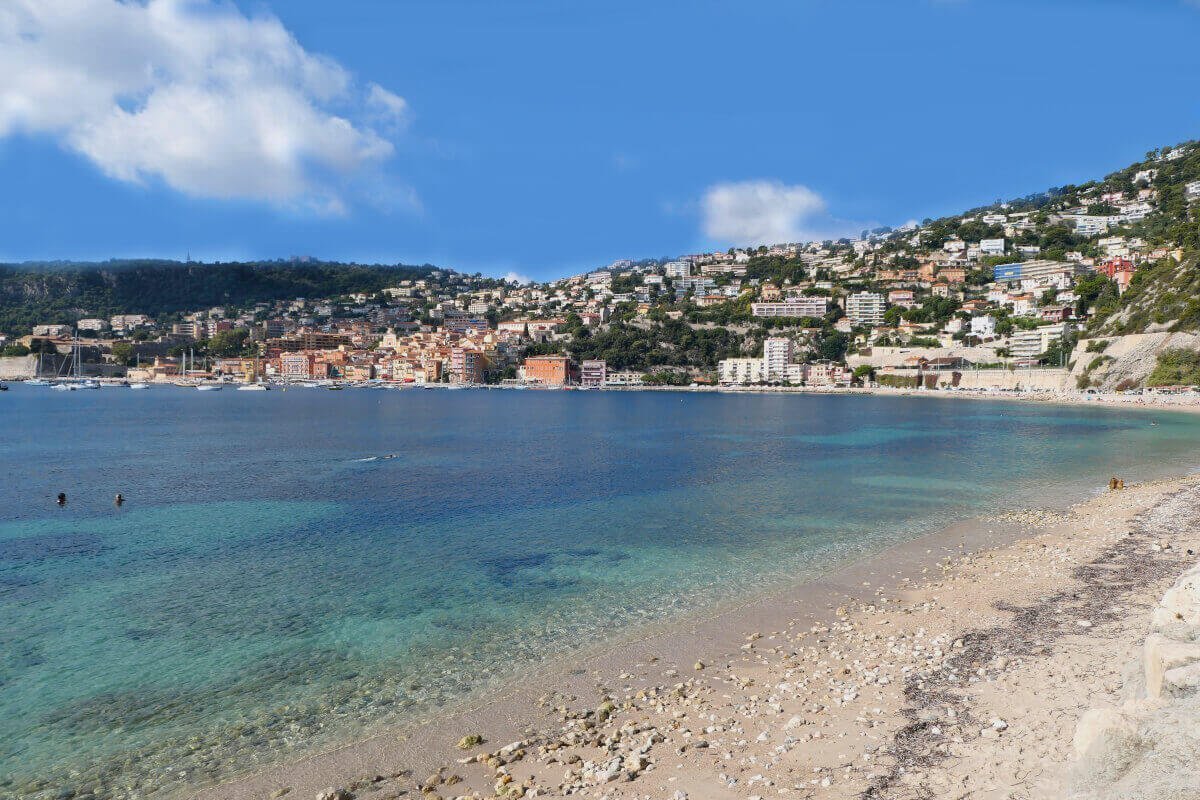 The village centre is very charming, with many alleys but all with stairs and not good for wheelchair users or those with mobility difficulties. 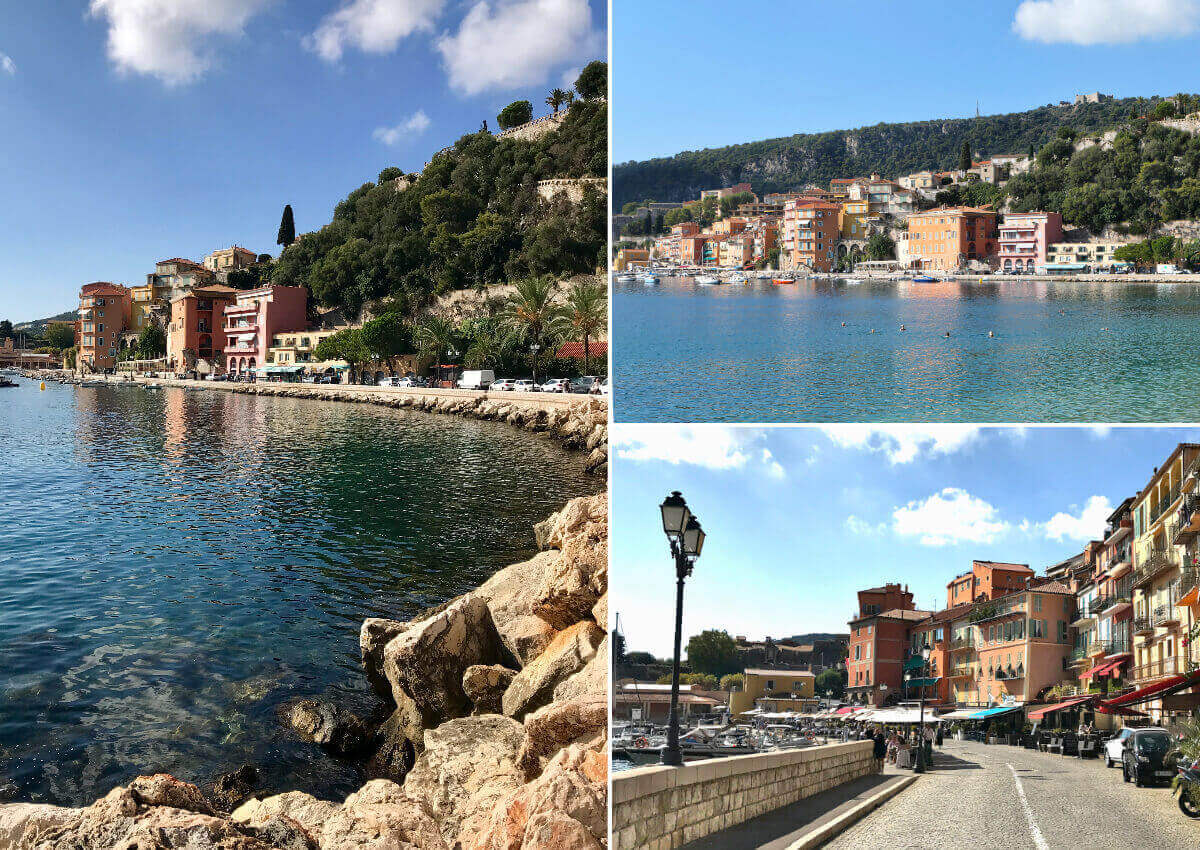 My tip is: don’t go to the restaurants that are on the seafront. I know the view is beautiful, but if you enter the tiny lanes and walk amid them, you will find several restaurants and bars where the food is even better and cheaper. Win-win! 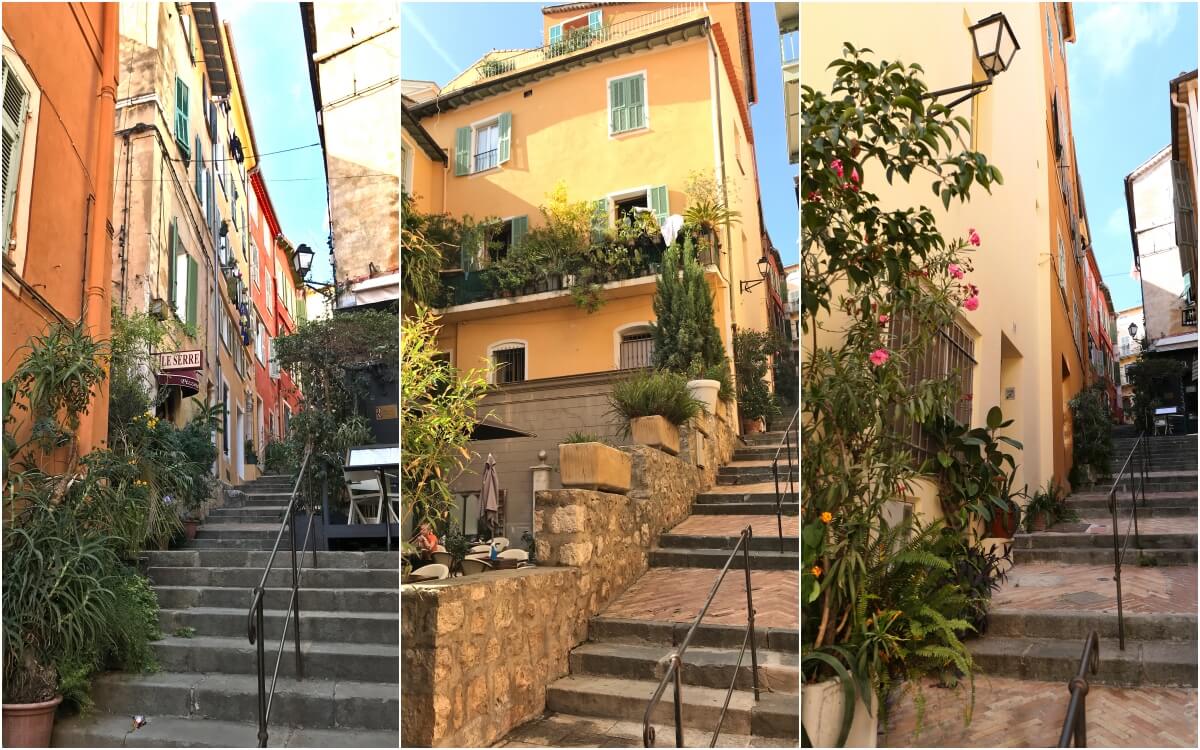 It is where millionaires and billionaires have their villas.
We drove there, and there is no way to see the mansions, as they are all hidden behind high walls. Such a shame for us!!!

You can visit the following public beaches on the peninsula: Les Fossettes, Cros deï Pin, Les Fosses, Passable and Paloma.

We stopped at Paloma walked a little bit at the “Pointe Saint-Hospice” trail. The path is stunning, and you have a fantastic view over Èze, Monaco and Italy. 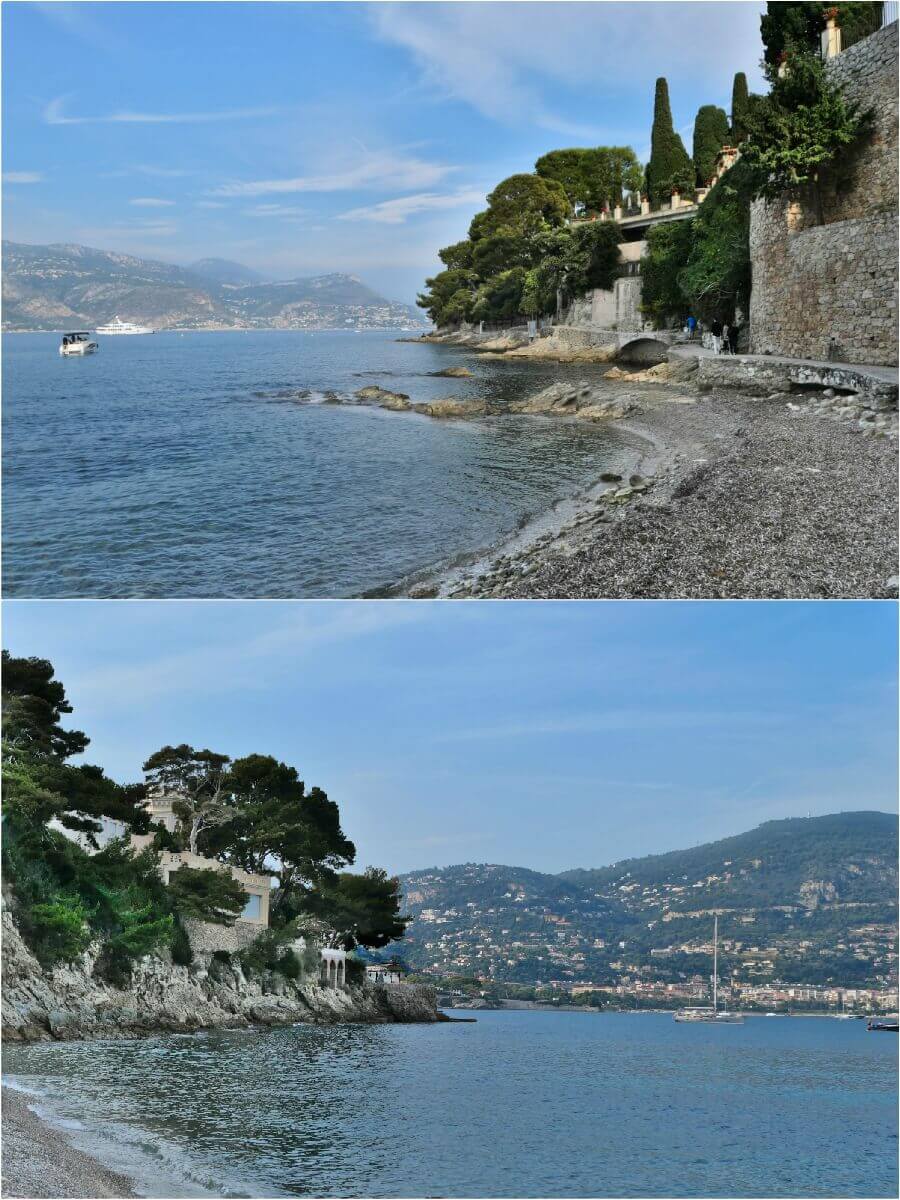 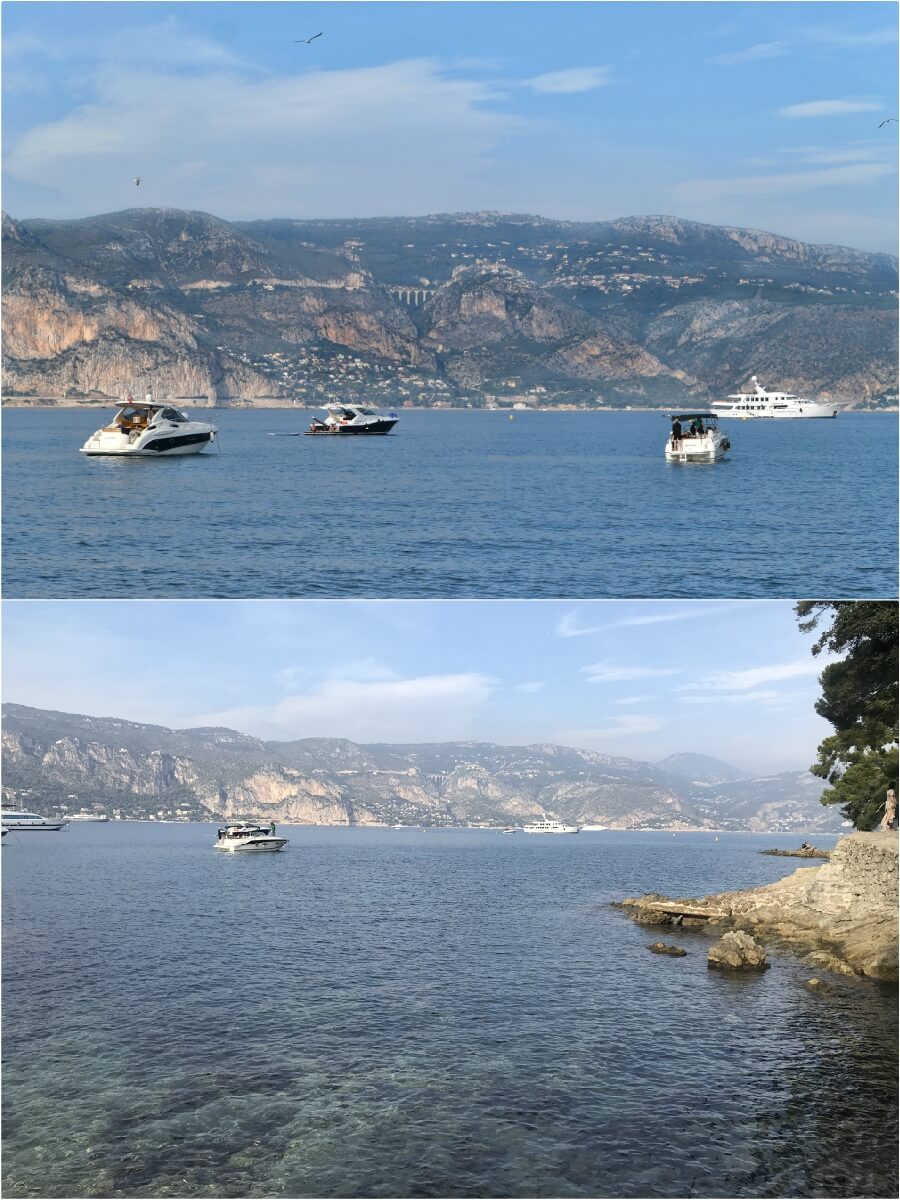 Afterwards, we stopped at the marina for a drink and to enjoy the lovely views. 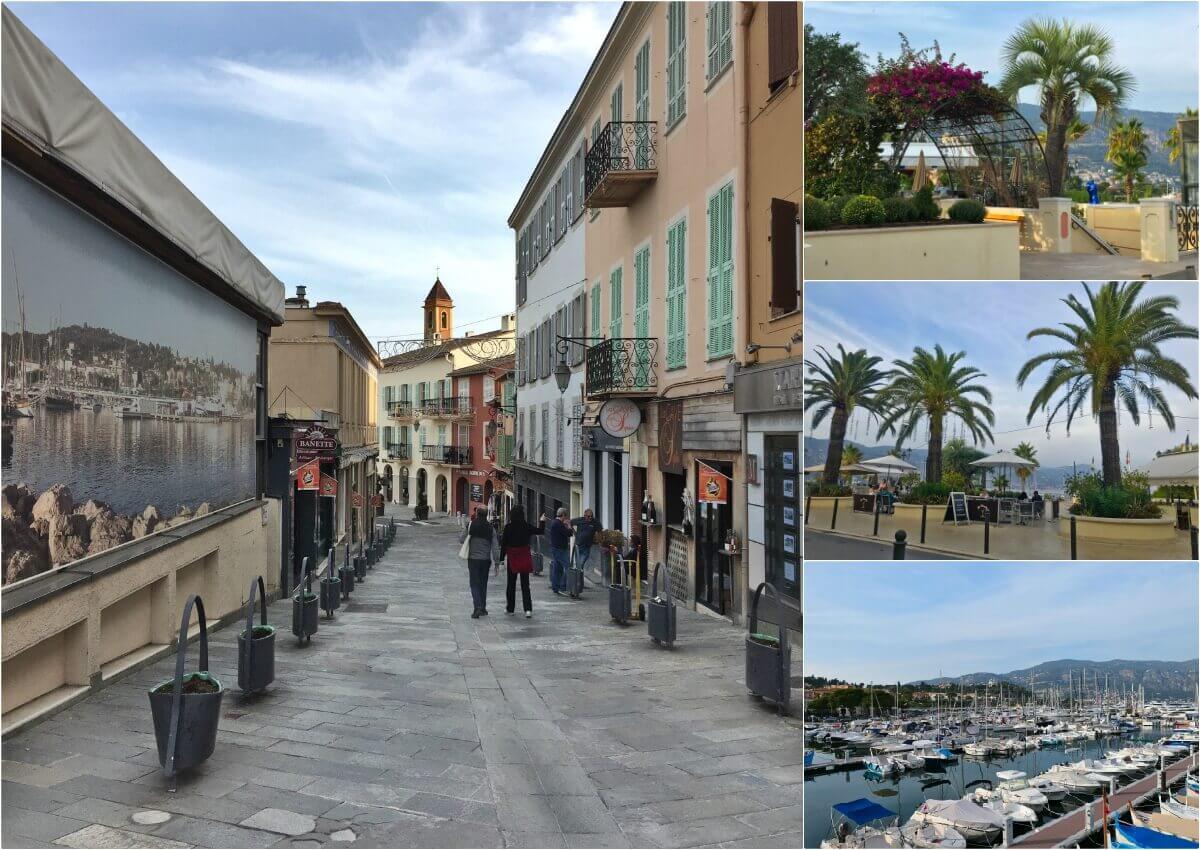 It is the part of Èze that is on the coast. The train station is there. Therefore if you want to go to Èze Village, you will have to take a bus.

The Èze beach is lovely and has fewer people than the neighbouring beaches. Or at least, in October it was like that.

It is part of Èze but at the top of a mountain.
It is considered one of the most beautiful villages in France, and I just loved the place.
The village deserves a single post about it and I you can read here.

As you can see, these are just an example of the day trips you can make it when you are in Nice.
There is no lack of beautiful places for you to choose from!