Hello guys,
Today I will make a summary of what you can visit in Lisbon. No doubt the city is incredible and there are many things to see.
I believe that the ideal is to stay at least 3 days, which will still be quite hectic, but you will be able to enjoy and get to know several tourist attractions.

Praça do Comércio, also known as Terreiro do Paço, stands on the edge of the Tagus River and is one of the largest squares in Europe. At the square, you will find the statue of King Joseph I and also some Portuguese’s government buildings. Here is the ideal place for you to take photos of the Augusta Arch. And if you need it, in the square is the tourist information centre.

Arco da Rua Augusta is an arch that was built in 1755, symbolising the reconstruction of Lisbon, after a great earthquake that destroyed the whole city. Here is one of the most photographed spots in Lisbon and since 2013 it is possible to visit the top of it to enjoy fantastic views. The ticket costs around € 3. 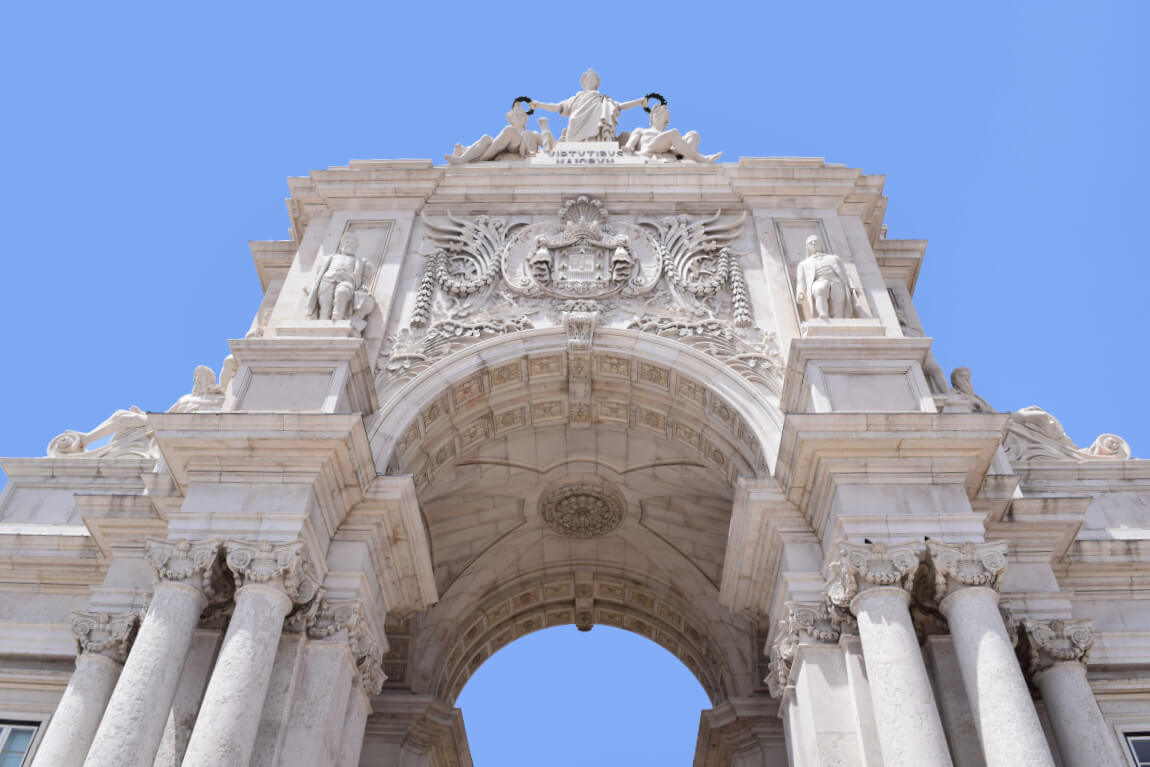 Rua Augusta is one of the most traditional streets, and it has loads of bars, restaurants and shops, besides being on the way to access the Elevador de Santa Justa, Rossio, Praça da Figueira, etc.

Praça da Figueira has a statue of D. Joao I. The square is where the traditional bakery, the Confeitaria National is located. The bakery is from 1829, and one of the oldest cafes in the capital.

Rossio or Praça Dom Pedro IV in it stands the statue of Dom Pedro IV, D Pedro I in Brazil and the meaning of its pedestal is Justice, Wisdom and Strength. Around it is the National Theater Dona Maria II and Rossio Station. Curiosity: In the 19th century, the pavement of this square was made with small cobblestone and in the shape of waves. What today is the famous sidewalk in Rio de Janeiro.

Praça dos Restauradores is a square where there is an obelisk, and it is a tribute to the restoration of the Portuguese crown after the Spanish rule.

From here, the famous Elevador da Glória (funicular) connects Restauradores Square to Bairro Alto neighbourhood since 1885. The funicular is right next to Palácio Foz, at the beginning (or end) of Av. Da Liberdade and the stopping point is at the side of the Mirador de São Pedro de Alcântara.

Avenida da Liberdade is around 1 mile (1.6km) long and connects Restauradores Square to Marquês de Pombal. The tree-lined street has designer shops and luxurious hotels and is one of the most important avenues in the city. It is lovely to walk on it, have a drink on the outside tables and relax a bit.

Praça Marquês de Pombal is a square where it has a monument in honour of the Marquis of Pombal, who was the Prime Minister responsible for the reconstruction of the city after the earthquake, followed by a tsunami, that devastated the town on November 1, 1755. Curiosity: it seems that gold found in Brazil at that time, was used to rebuild Lisbon after this disaster.

Parque Eduardo VI is the largest park in Lisbon, with gardens, a lake and the view of the city is sensational. The name was given in honour of the King of England, King Edward VI, who came to visit the town and close alliances with Portugal in 1903. 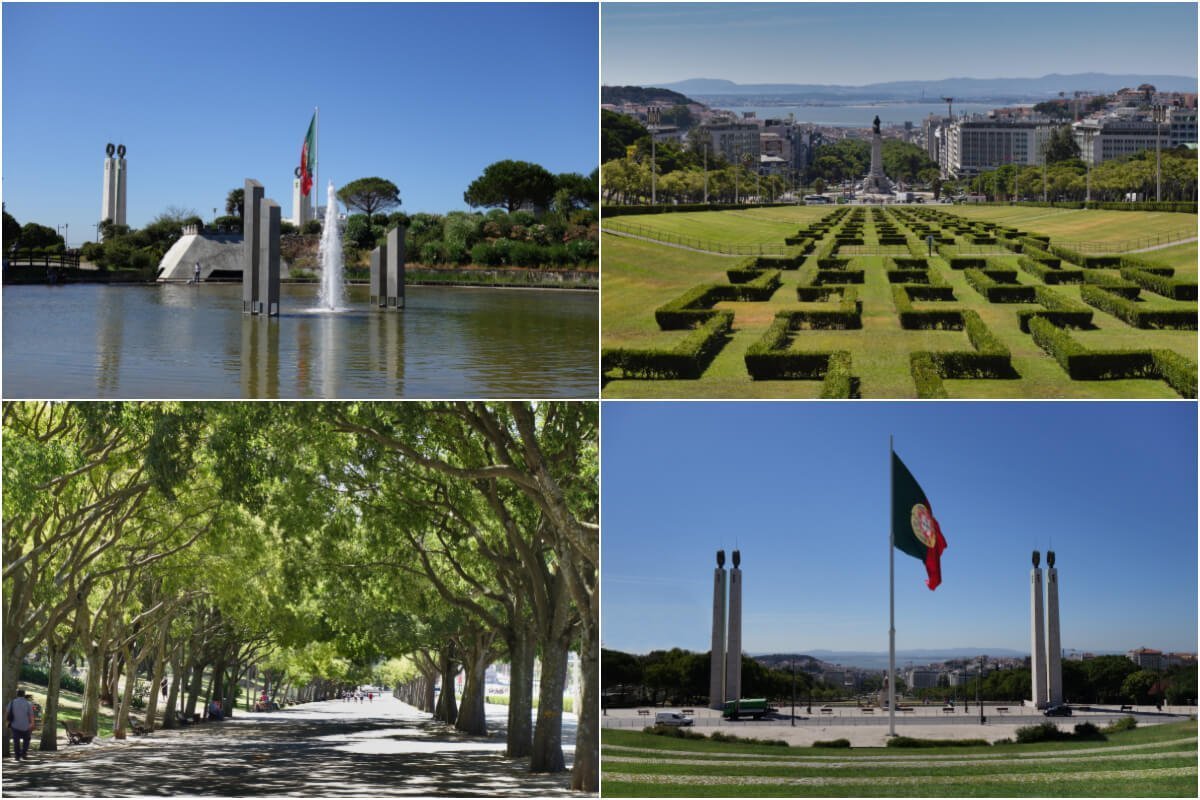 Elevador de Santa Justa is a famous lift that connects the neighbourhood of Baixa to Largo do Carmo and the ruins of the church “Igreja do Carmo”, in the district of Bairro Alto/Chiado.

At the top of the lift, there is a spiral staircase that will take you to a platform with fantastic views of Lisbon. As I’m afraid of heights, I did not go on the platform, therefore, these photos are taken by my friends. 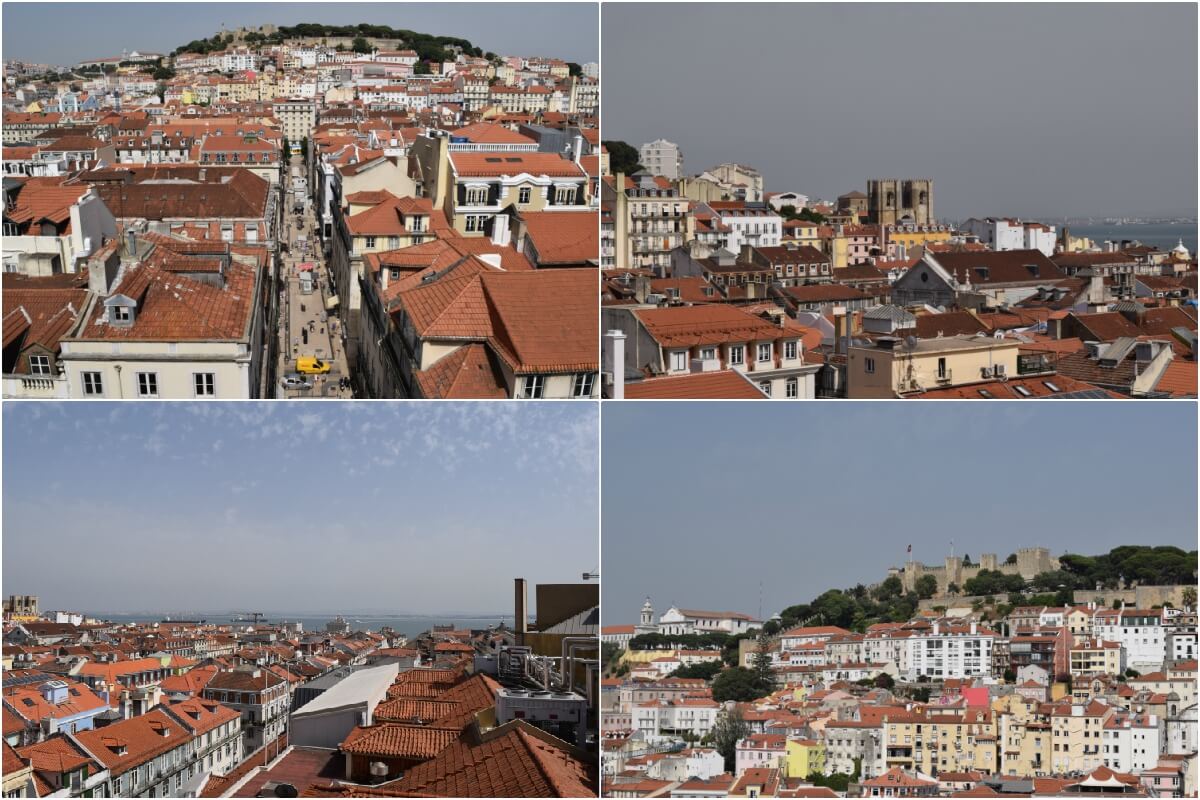 The lift is included in the 24-hour public transport ticket, but if you want to go on the platform, you have to pay an additional €1.50. Bear in mind that to get on the lift, as on the platform, you will probably get a reasonably large queue, as only 29 people can go on at a time.

Chiado is the most artistic and friendly neighbourhood that holds cafes, theatres, galleries, shops, etc. Bairro Alto, which is an extension of Chiado, is considered the bohemian zone of the city.

Rua Garret is the main street of Chiado. Although it is not very long, There are several stores, such as Zara, Nespresso, Nike, Swarovski, etc. It is here the meeting place for a beer as well. In this street, you will find the oldest bookstore in the city, the Bertrand Bookstore, founded in 1732.

Café À Brasileira is another icon of Rua Garret.
It was founded in 1905 and at the time sold Brazilian coffee. Afterwards, it became Lisbon’s first modern art museum, thus gaining the interest of artistic and literary intellectuals and being a meeting point for them.
As Fernando Pessoa was a frequent attendant of the place, a statue was inaugurated in his honour. 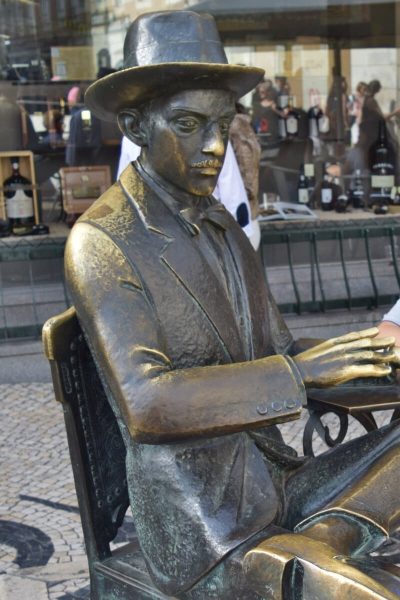 Praça Luís de Camões is also called Largo de Camões and separates Chiado from Bairro Alto. In the centre of the square, there is a statue of the poet Luís de Camões, inaugurated in 1867. Here is also the Brazilian Consulate and Portugal’s Ministry of Economy.

Church and Museum of São Roque within the church is a chapel that is considered the most valuable in the world. At the museum, which is amongst the oldest in Portugal, has its reference in sacred art, containing paintings, articles in bronze and silver, etc.

Miradouro de Santa Catarina or also called Adamastor is in Bairro Alto and provides a beautiful view of the city. It is more frequented by students, who go there for a drink before going for the night out.

Carmo Church and Convent and Largo do Carmo – these ruins were previously a convent, until being destroyed by the earthquake, and now stands the Association of Portuguese Archaeologists and also the Archaeological Museum. In front of the old convent has a very charming square, called Largo do Carmo. We stopped there to rest and have a cold beer because nobody is perfect!

It is the new and modern area of Lisbon. My friends and I did not have time to visit this side of the city, as we gave priority to the historic centre, but I know you can visit the following tourist attractions:

Estação do Oriente is a super modern tube platform and it is kind of public art gallery.

Oceanarium is one of the largest aquariums in the world and the second largest in Europe. It is among the most visited cultural addresses in Portugal. It opens every day from 10 am to 8 pm in the summer and from 10 am to 7 pm in the European winter.
For information on values and also to buy the ticket in advance, visit their website: https://www.oceanario.pt/visita/precos/

Telecabine Lisboa or Teleférico de Lisboa is a short cable car ride that lasts about 8 minutes with a little more than 1km and travels part of Parque das Nações. The cable car entrance is just behind the Oceanarium. For more information click here.

Ponte Vasco da Gama is the longest bridge in Western Europe and is considered one of the longest in the world with a little more than 17km.

Torre Vasco da Gama in caravel format is the tallest building in Lisbon.

Pavilhão do Conhecimento Ciência Viva is an interactive science and technology museum.

MEO Arena is the biggest pavilion in Portugal and where great shows and concerts happen.

If you have any questions or want more information about these places, do not hesitate in asking me, okay?
And if you want to know about the neighbourhoods of Belém, Alfama and Graça, be sure to read my next post.
Have a great day! 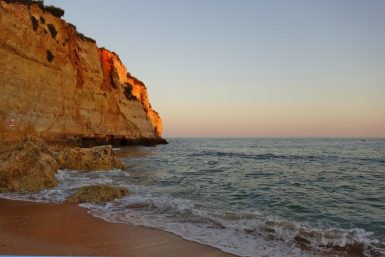 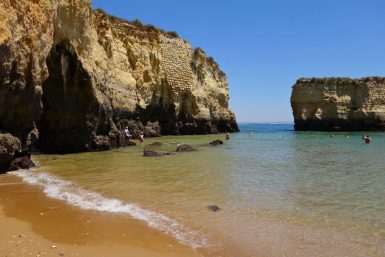