Home » A new statement about measures regarding COVID-19 in England

A new statement about measures regarding COVID-19 in England

As many already know, England is experiencing the much-feared (and expected) second wave of contagions caused by the coronavirus.

At the moment, there are more than 617,000 confirmed cases in the UK, and more than 42,875 people have unfortunately died.

There are more patients in hospitals than when the lockdown was announced in March, although they have not yet reached capacity. Some of Nightingale’s temporary hospitals that were specially made to treat patients with COVID-19 and remain closed since July are now in stand by.

Some restrictive measures were imposed in late September. Still, with the cases increasing considerably and the fact that the government is doing local lockdowns, thus creating a lot of confusion about how each of these areas should proceed, the government has made some changes.

On October 12th, Prime Minister Boris Johnson, alongside with Chancellor Rishi Sunak and the Chief Medical Officer Prof Chris Whitty made a statement explaining about a new system with three levels of restrictions.

Each area will be classified according to the level of contagion, and the alert will be medium, high or very high – tiers one, two and three.

The areas with the lowest infection rates will be placed at Level 1, which means the basic national rules that are currently in effect, including pubs, bars and restaurants closing at 22:00 and the rule of six people who can meet which applies both indoors and outdoors.

Level 2 faces extra restrictions, where six people can only meet outdoors, and there can be no mixing between different household inside the houses.

Level 3, which are the areas where transmission is increasing most rapidly, much stricter rules will be required. Pubs and bars will be closed, except where is served meals. Drinks can only be purchased along with meals; people from different households cannot mix inside or outside, and gyms, leisure centres and casinos will close. Also, it will be advised that people do not travel.

At the moment, the Liverpool city area (Liverpool, Knowsley, Sefton, Wirral, St Helens and Halton) – is the only area facing Level Three restrictions, which will take effect from October 14th.

See which cities are at high and very high levels here: https://www.gov.uk/guidance/full-list-of-local-covid-alert-levels-by-area
And if you want to check the level of your area, check it out here.

Even with Level 3, the government does not intend for a full lockdown like in March and April, where stores, schools and universities were closed.

Although according to Prof. Chris Whitty, these measures will not be enough and local authorities in “very high” alert areas are likely to have to add more strict local rules.

Furthermore, to help these local authorities, the government will provide £ 1 billion for local testing and tracking, as well as local surveillance in very high-alert areas.

Because of the pandemic, the UK unemployment rate has reached its highest level in more than three years, growing to 4.5% in the three months to August, compared to 4.1% in the previous quarter.

Trying to help the recession, the government will pay two-thirds of workers’ wages, up to a maximum of £ 2,100 per month, in companies that may have to close because of the new rules, as long as they are away from work for at least seven days.

This will be part of the Job Support Scheme, which replaces the furlough program that started in March and will finish at the end of October 2020.
The Job Support Scheme will also help businesses that are allowed to open, encouraging those to bring their employees to work at least part-time.

And for hours not worked, the government and the employer will each pay a third of the remaining wages. This means that the employee would receive at least 77% of the salary. The government contribution will be limited to £ 697.92 per month.

The reality is that the English leaders do not like to impose their rules rigorously and they are too polite to transmit a clear message (although they try to suggest) about the predicament of contamination.

As the graphs show, this second wave was spread mainly amongst young people between 16 and 29 years old. Young people who go out to the bars, and when it’s closed, they have parties among hundreds of others in the middle of the road, youngsters who do not keep distance between themselves and do not follow the rules.

Unfortunately, this younger generation, who are often asymptomatic, transmit the virus into their homes, thus contaminating the elderly and people at risk.

Of course, it is not a general rule, not everyone does that, and I am not here to judge. The fact is that the age profile of new infections in the coronavirus pandemic appears to be younger, according to the World Health Organization (WHO). 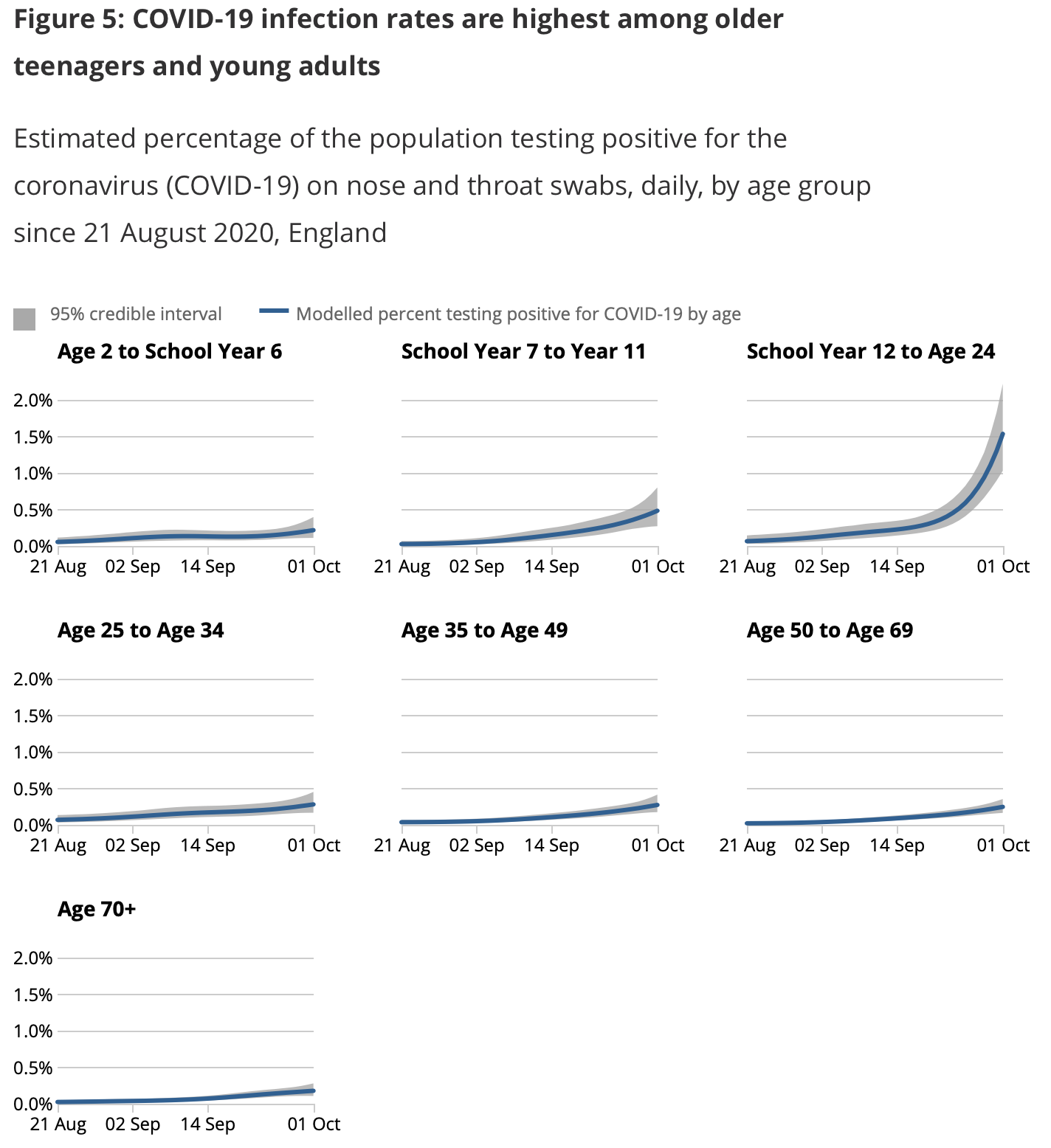 So the question everyone is asking is: what will our Christmas be like? If these rules still apply with a limited number of people, will families be divided on Christmas? Or will people put these measures aside in such a special period and meet regardless?

Unfortunately, or fortunately, a lot can happen until December and what we have left is to believe that everything is going to get better or to settle down. However, this will be an unusual year of celebrations, which does not mean bad, just different…

Pubs are reopening in England