Usually, when the weekend is sunny (which is rare!) and if we don’t have anything scheduled, we take the car and go for a drive through the countryside of England.

We love to drive the narrow roads and enjoy the beautiful landscape and architecture. And, as we are members of the National Trust (read about here), we always put in the itinerary somewhere we haven’t visited yet. 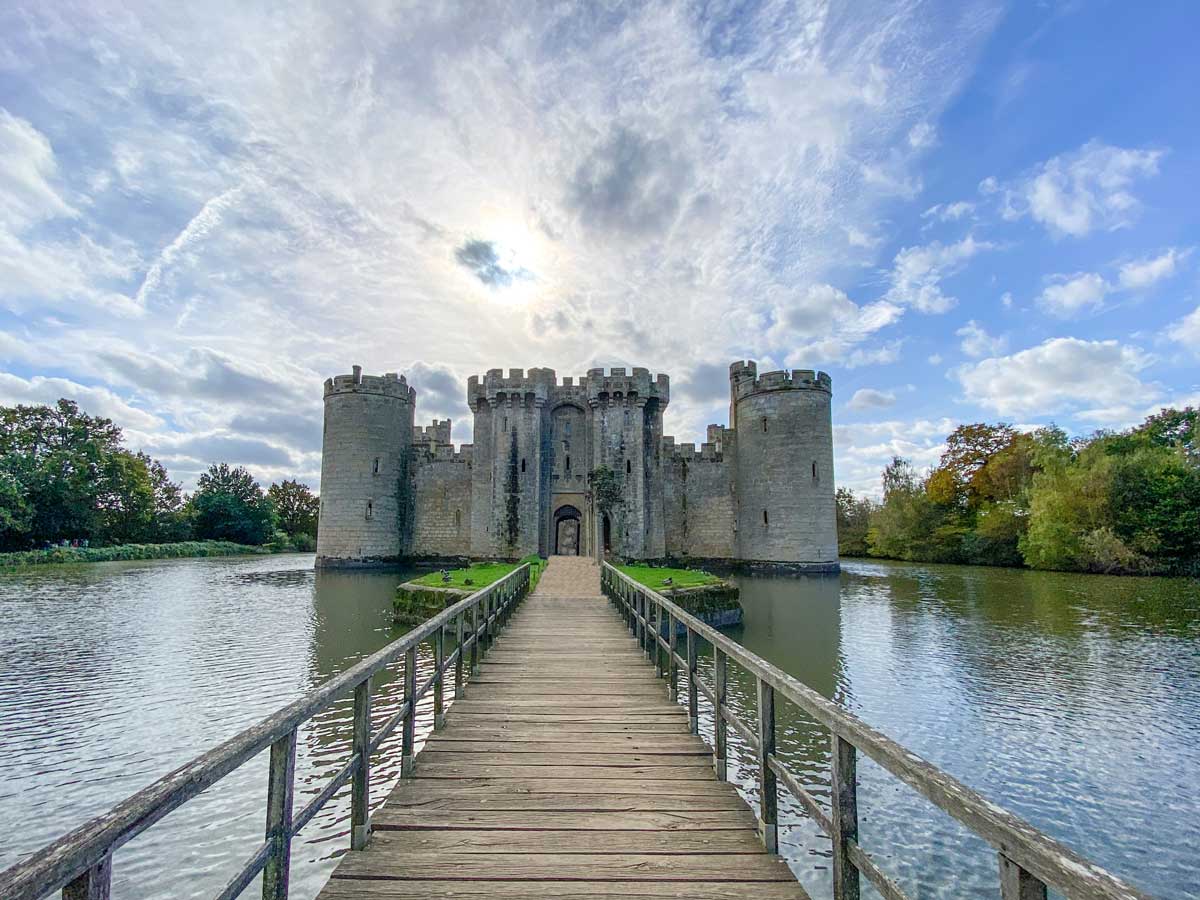 One of these days, we decided to visit the famous Bodiam Castle, built in the 14th century by Sir Edward Dallingridge and his wife, Elizabeth Wardedieu.

According to the National Trust, Sir Edward was a knight of King Edward III and a veteran of the Hundred Years War, which earned him prestige and wealth.

In addition, his wife Elizabeth came from a wealthy and influential family, who owned the lands where Bodiam is now located, and as such, Edward inherited them through his marriage. 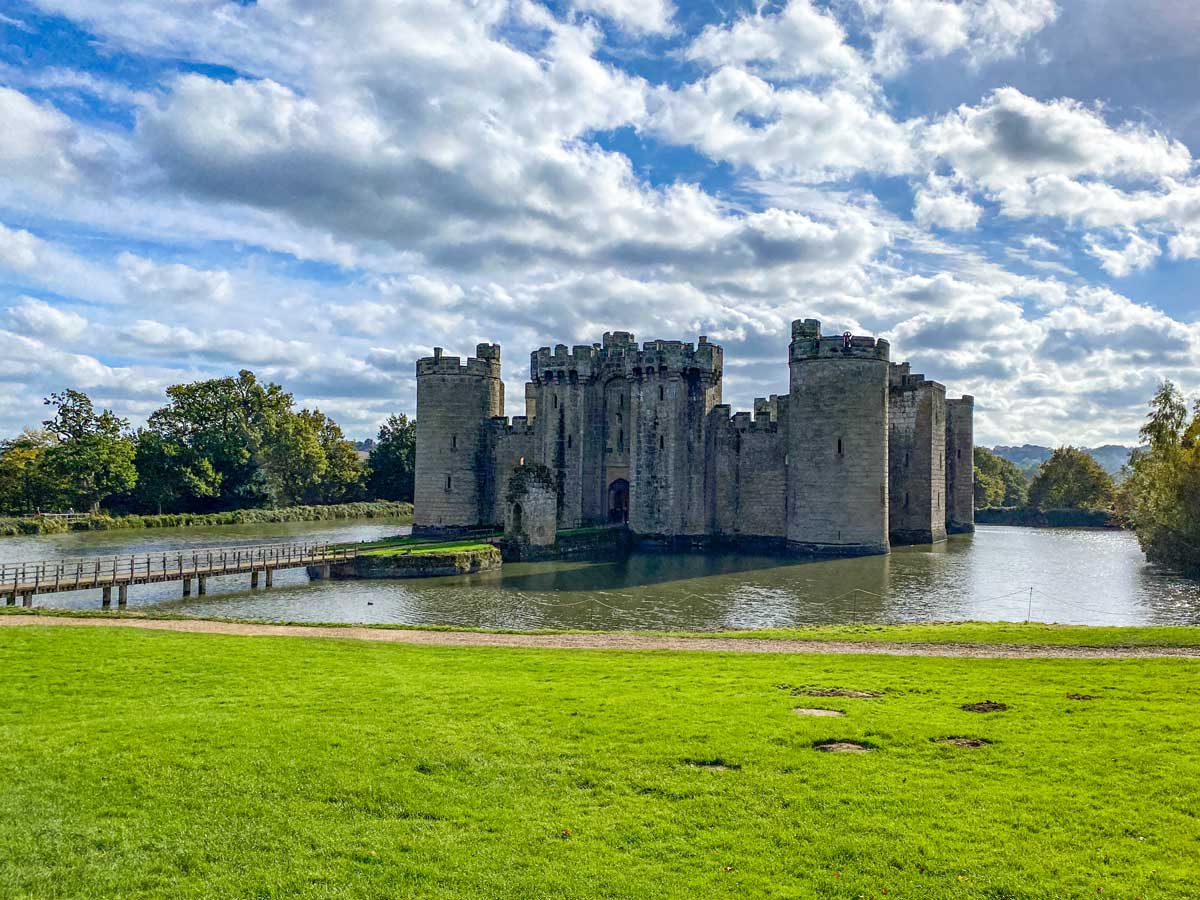 Having money and influence in royalty, Sir Edward got approval to build the moated castle and with his knowledge of battles, he designed the castle to protect the South Coast against a possible threat and invasion by the French during the Hundred Years War.

Though also to impress his friends and family, transforming the castle into a luxury home and an expression of their status.

Unfortunately, when the castle was completed around 1390, Dalyngrigge did not have much time to enjoy it, as he died between July 1393 and August 1394. 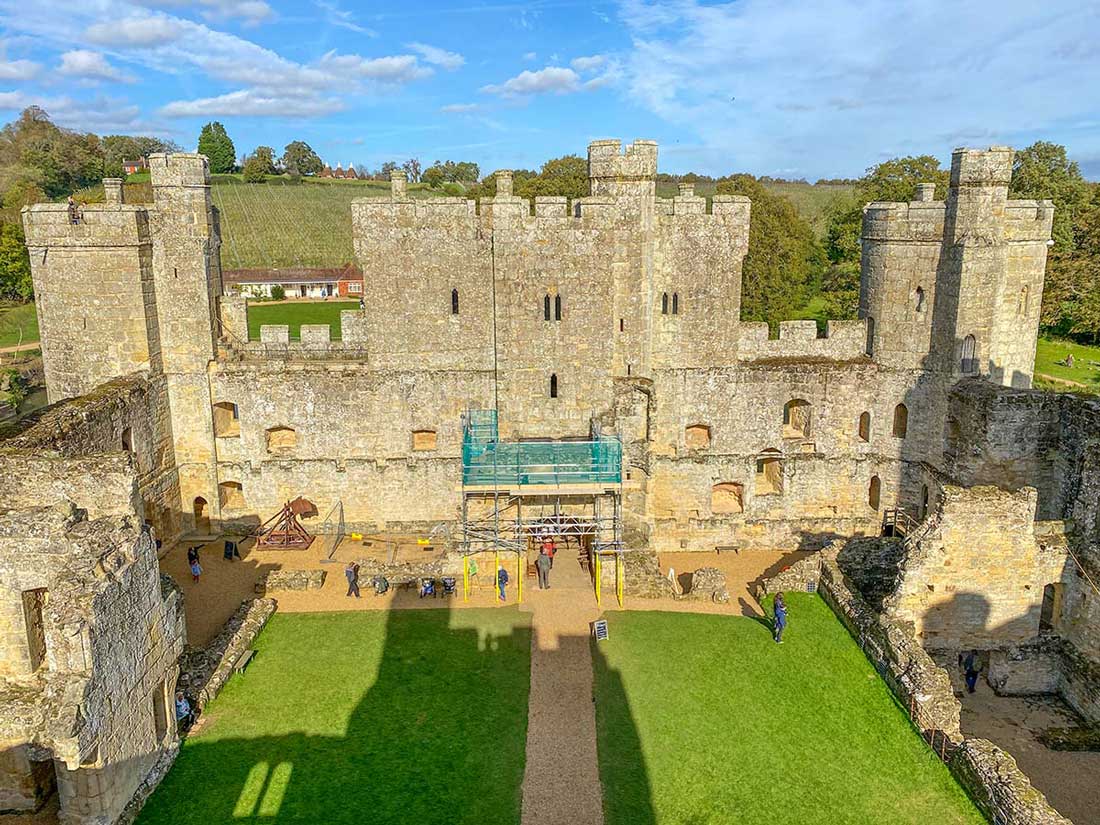 After that period, his family still lived there, but later it was probably abandoned and rarely used in the late 15th century.

Much of the interior and most of the barbican were “stolen” in the following centuries, and its interiors fell into ruin with only a few walls and the towers surviving. 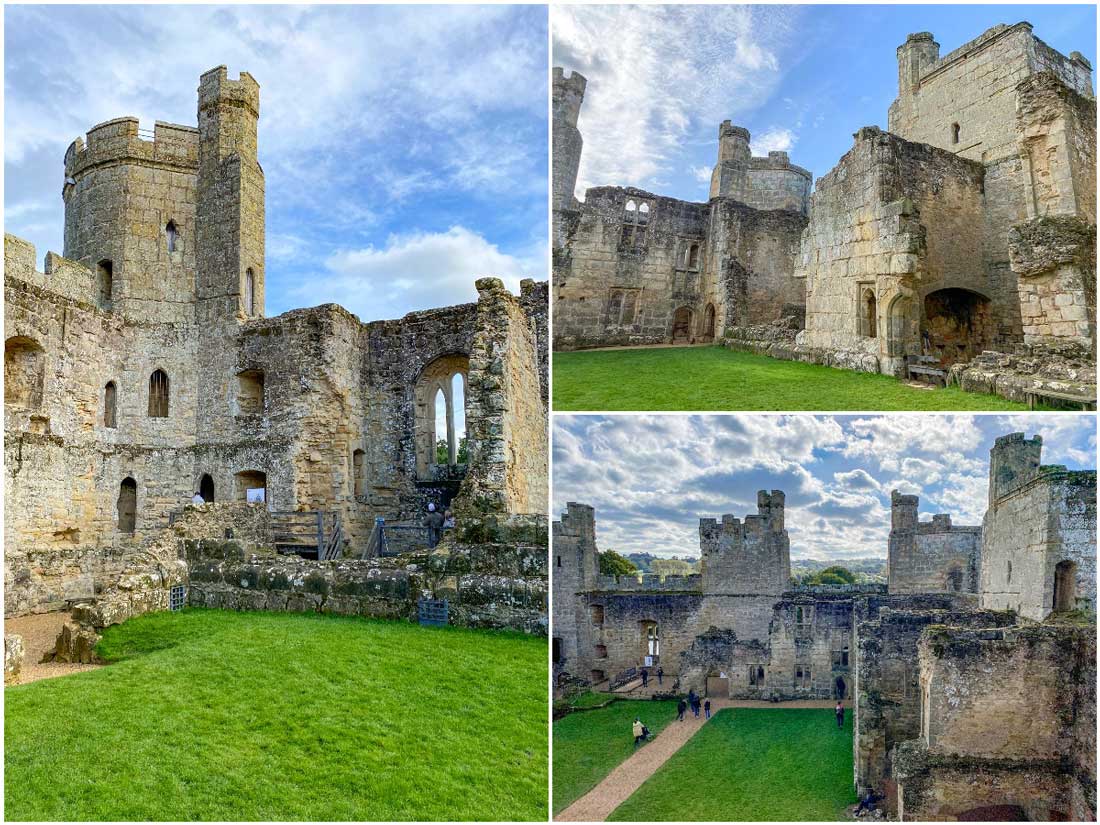 In the 1830s, “Mad Jack” Fuller purchased and restored the site and landscape.
In the 1920s, the castle was renovated again by the last private owner, Lord Curzon, the former Viceroy of India (responsible for restoring the Taj Mahal). He then left Bodiam Castle to the National Trust in 1925.

From the 18th century onwards, people began to take more interest in the country’s history and began to preserve and protect historical monuments. As such, Bodiam Castle became known for its ancient monument and started attracting visitors and artists.

Today, Bodiam Castle is one of the most important and well-known castles, both as a remarkable survival and medieval architecture. 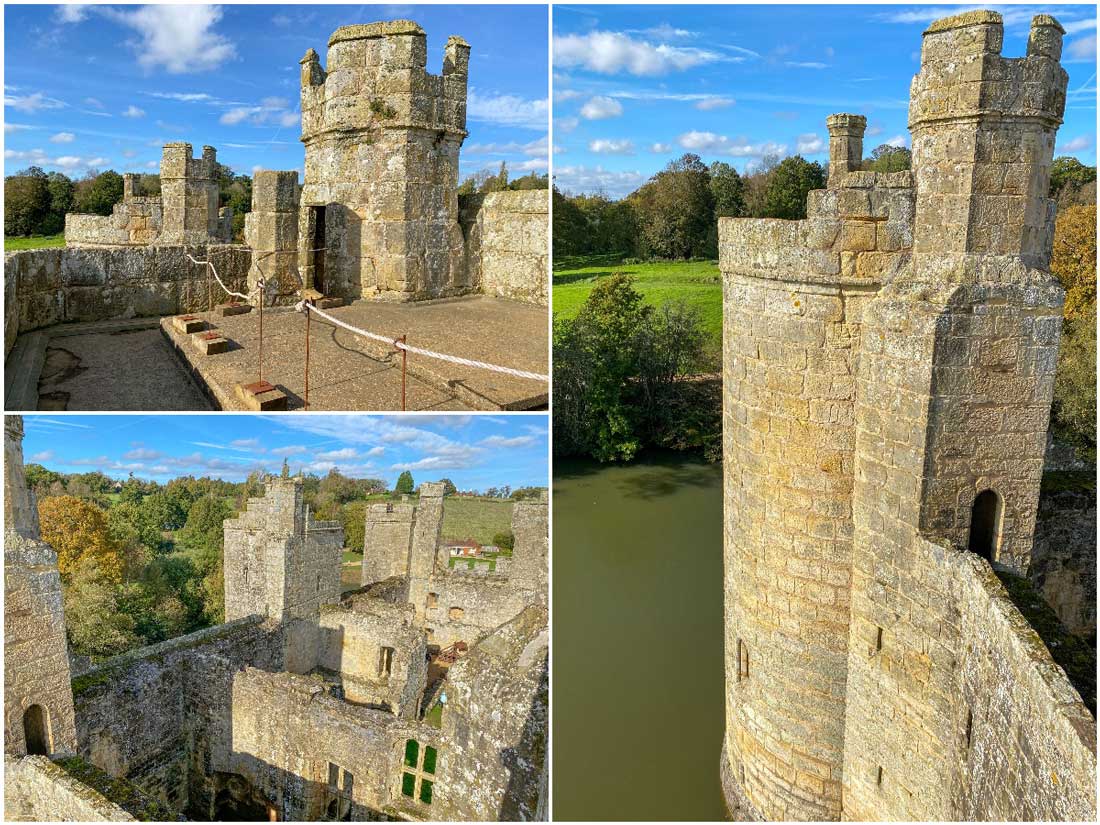 Sadly, there is no surviving record of how the castle was designed and what its interior actually looked like. Still, from the research of historians, you can get an idea of the layout and its magnitude.

I was lucky that the day I went to visit it was a lovely day, and we were able to walk around the castle and its surroundings with an iconic moat and beautiful lush green scenery.

It is possible to climb above two towers, but the stairs are narrow and steeply. Yet, the effort is worth it, as, from the top of the tower, it is possible to have a great view of the entire interior of the castle and the surroundings.

Bodiam Castle has restrooms, picnic benches, a souvenir shop, a coffee shop and trails through the surrounding grounds. 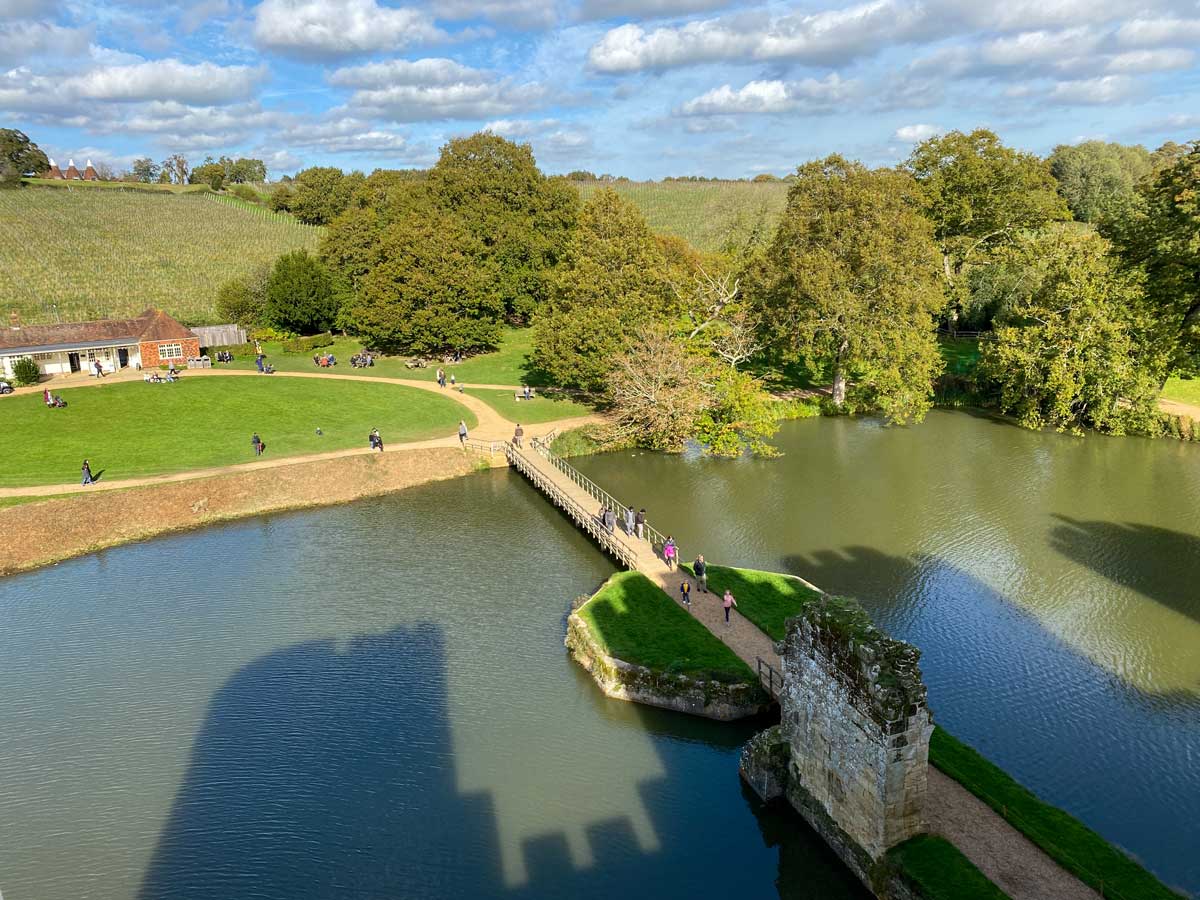 It is free for National Trust members. Otherwise, you can check the recent prices here.

By train
One of the well-known tours in the region is to take the train from Tenterden – Northiam – Bodiam route. See more information here.

By car
Address: Bodiam, near Robertsbridge, East Sussex, TN32 5UA
It has wide parking spaces, which is free for National Trust members and non-members pay £4 per car. 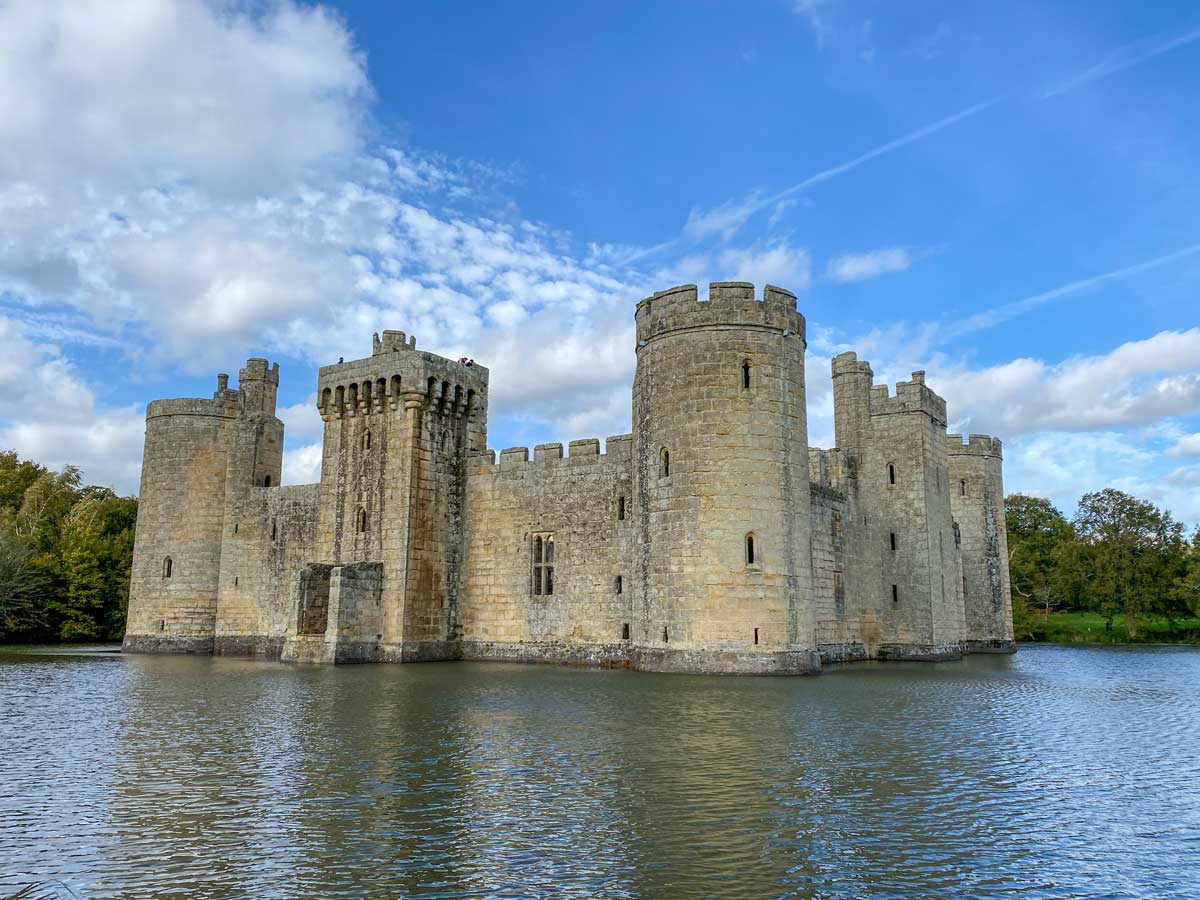 As the castle tour took around two hours, we decided to go to another National Trust property, the Bateman’s house, 10 miles from Bodiam.

I hope you enjoyed the suggestions and if you have any questions, just leave a comment and I’ll be happy to help you.
Have a great day!